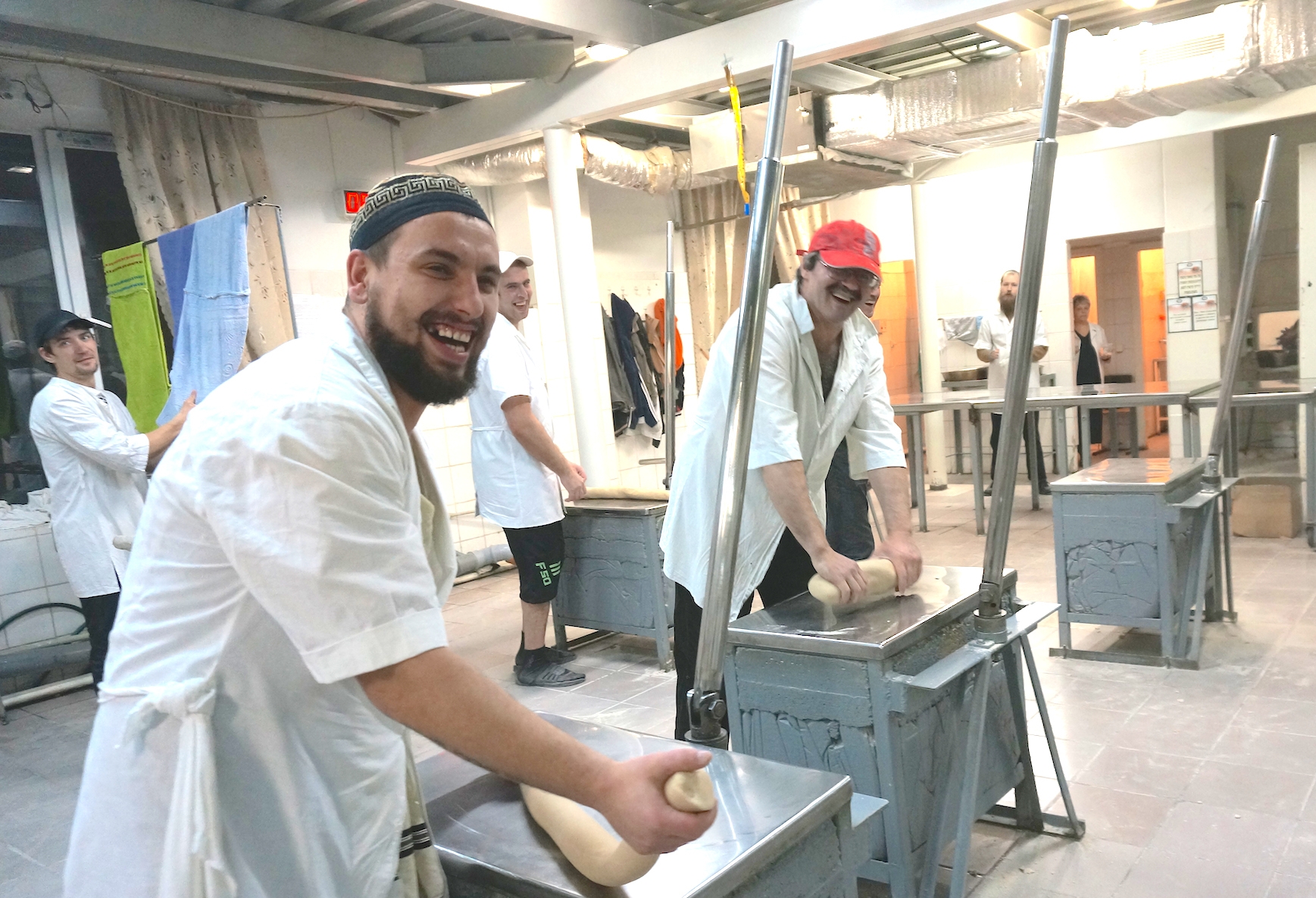 DNEPROPETROVSK, Ukraine (JTA) — With one eye on a digital countdown timer, Binyamin Vestrikov jumps up and down while slamming a heavy rolling pin into a piece of dough.

Aware of his comical appearance to the journalist watching, he exaggerates his movements to draw laughs from a dozen colleagues at the kneading station of Tiferet Hamatzot — a factory believed to be Europe’s only permanently open bakery for handmade matzah, or shmurah matzah.

But Vestrikov’s urgency is not just for entertainment.

Rather it is designed to meet the production standards that have allowed this unique bakery in eastern Ukraine to provide the Jewish world with a specialty product at affordable prices. The factory here also offers job security to about 50 Jews living in a war-ravaged region with a weakened economy and high unemployment.

Each time Vestrikov and his coworkers receive a new chunk of dough, the timers over their work stations give them only minutes to turn it into a 2-pound package of fully baked matzah — a constraint meant to satisfy even the strictest religious requirements for the unleavened crackers that Jews consume on Passover to commemorate their ancestors’ hurried flight out of Egypt.

“The faster the process, the more certain we are that no extra water came into contact with the dough and that it did not have any chance of leavening,” says Rabbi Shmuel Liberman, one of two kashrut supervisors who ensure that the factory’s monthly production of approximately eight tons complies with kosher standards for shmurah matzah. 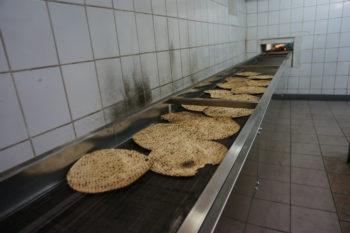 Matzahs on the production line of the Tiferet HaMatzot factory in Dnepropetrovsk on Dec. 8, 2014. (Cnaan Liphshiz/JTA)

The time limitation means the entire production line has only 18 minutes to transform flour and water into fully baked and packaged matzah.

Still, the workers are not complaining. They are happy to have a steady, dollar-adjusted income in a country whose currency is now worth a third of its February 2014 value — the result of a civil war between government troops and pro-Russian separatists that has paralyzed Ukraine’s industrial heart and flooded the job market with hundreds of thousands of refugees from the battle zones.

“It’s hard work, sure, but I am very happy to be doing it,” Vestrikov says. “I don’t need to worry about how to feed my family. There is very little hiring going on, and every job has dozens of takers because all the refugees from the east are here.” 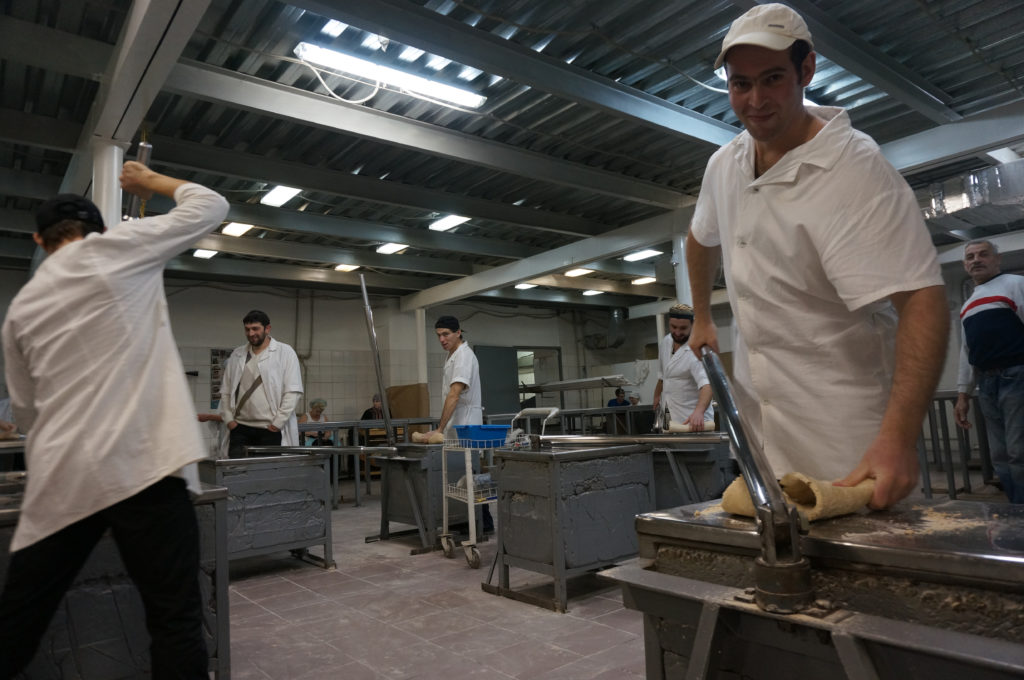 Binyamin Vestrikov, right with other workers at the Tiferet HaMatzot factory in Dnepropetrovsk on Dec. 8, 2014. (Cnaan Liphshiz/JTA)

Rolling up a sleeve over a throbbing bicep, he adds, “Besides, this way I don’t need to go to the gym.”

Despite working under pressure in a hectic and overheated environment — the ovens at Tiferet Hamatzot remain heated for days, preventing the building from ever cooling off even at the height of the harsh Ukrainian winter — the factory’s workers form a tight community whose social currency is made up of jokes and lively banter, mostly on cigarette breaks.

Workers like Vestrikov say they receive good wages, but production costs and taxes in Ukraine are so low that the factory can still afford to charge customers significantly less than its competitors in the West, said Stella Umanskaya, a member of the Dnepropetrovsk Jewish community and the factory’s administrational manager.

A 2-pound box of Tiferet Hamatzot costs approximately $10 locally and $15 abroad compared to more than double that price for shmurah matzah produced in bakeries in Western Europe, such as the Neymann matzah bakery in France, or those operating in Israel and the United States. 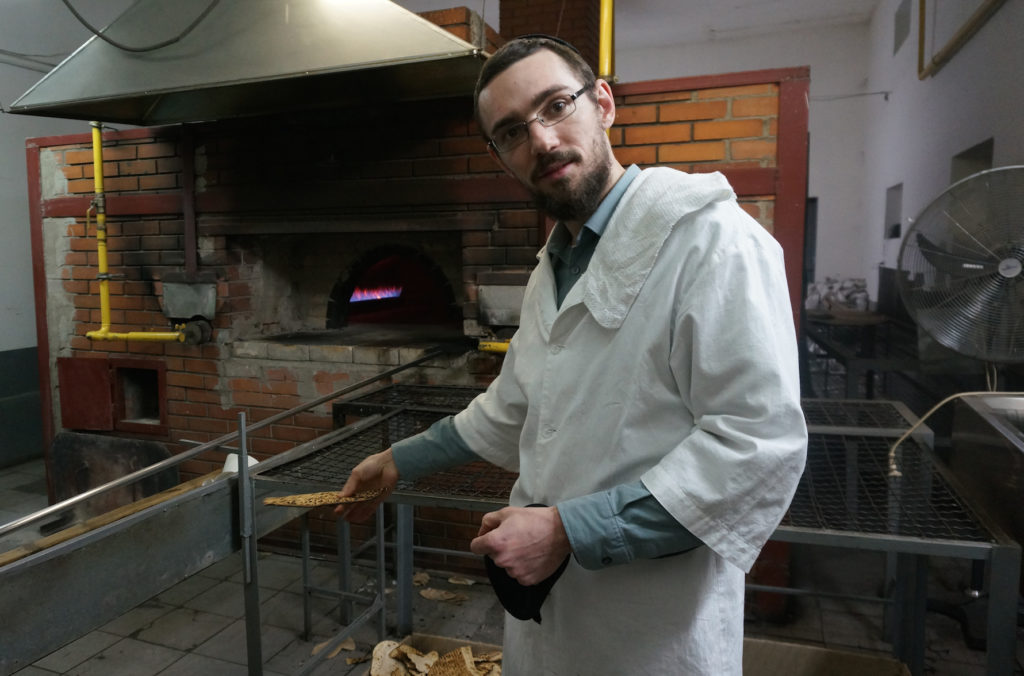 Shmurah matzah, Hebrew for “guarded matzah,” is more expensive than regular matzah because it requires manual labor by people whose task is to guard that it does not become leavened bread — a concept derived from a verse in the book of Exodus that states “You shall guard the matzot.” Some consider it a mitzvah to consume shmurah matzah because it upholds that commandment of devoting special attention or effort to guarding the matzah.

For this reason, traditional Jewish law requires that the handling of matzah and its ingredients be done by Jews only. But the factory also employs more than a dozen non-Jews who perform other tasks, including distribution. 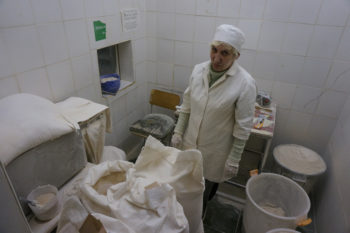 A worker surrounded by flour at the Tiferet HaMatzot factory in Dnepropetrovsk on Dec. 8, 2014. (Cnaan Liphshiz/JTA)

To Rabbi Meir Stambler, the owner of Tiferet Hamatzot, this means the bakery “not only puts matzah shmurah on Jewish tables, but also helps build bridges and do mitzvot with non-Jews.”

Stambler, an Israeli Chabad rabbi who lives in Dnepropetrovsk and opened the factory 12 years ago, said his father used to bake shmurah matzah in secrecy in Tashkent, when the Uzbek capital was still part of the Soviet Union and subject to its anti-religious policies.

“Back then, matzah used to be smuggled from Israel into the Soviet Union before its collapse in 1990,” he said. “It’s just unbelievable that now, some years later, we bake matzah in Ukraine and send it all over the whole world.”