Passover children’s books: choo-choos, baa-baas and back to Sinai 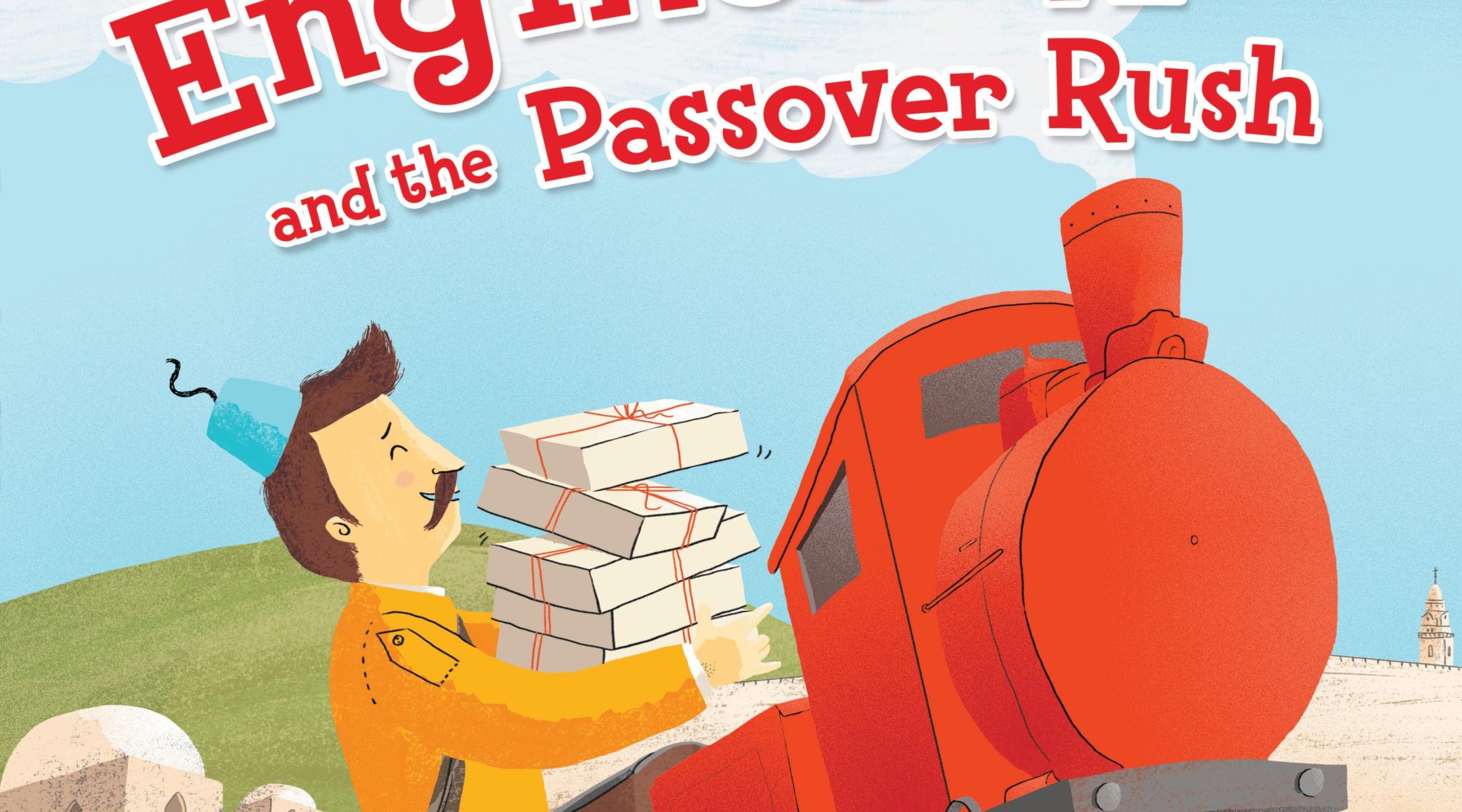 BOSTON (JTA) — When Deborah Bodin Cohen immersed herself in rabbinical school in the early 1990s, she expected to spend a year in Israel as part of her studies with Hebrew Union College-Jewish Institute of Religion. What she didn’t know was that a decade later, the experience of living in Jerusalem would spark her inspiration for a children’s book that has become a popular award-winning series.

“Engineer Ari and the Passover Rush,” Bodin Cohen’s fourth book in Kar-Ben’s “Engineer Ari” series, is among a trio of new children’s books for the eight-day holiday marking the Jewish exodus from Egypt. Shahar Kober provides the illustrations.

Passover begins this year with the first seder on the evening of April 3.

Other new books for the holiday include “And Then Another Sheep Turned Up,” by Laura Gehl, illustrated by Amy Adele, and a rare middle-reader Passover chapter book, “Scarlett and Sam: Escape from Egypt,” by the popular writer Eric Kimmel and illustrated by Ivica Stevanovic.

Bodin Cohen, the author of other award-winning Jewish children’s books, including “The Seventh Day” and “Nachshon Who was Afraid to Swim,” credits the idea for the Ari character to her daughter Ariana, who as a preschooler was a train enthusiast. Her daughter’s train play stirred memories of living near Jerusalem’s historic train station that dated back to the 1890s.

“I literally passed it every day,” she told JTA.

Bodin Cohen, the director of congregational learning at Congregation Har Shalom in Potomac, Md., realized that she could create a story of a train adventure based in historic Israel – one that would also entertain her own daughter and her friends.

Each of the Engineer Ari stories has some historical element, she points out, with extensive research and consultation with a curator of the Israel Railway Museum in Haifa.

While the book is not about Israel, it is the backdrop, one of Bodin Cohen’s goals.

“The idea of an illustrated book exposes kids to some of the beauty of Israel, the wildlife and the agriculture,” she said.

Engineer Ari is a friendly train engineer, an imagined character based on Jerusalem’s early railway system that transported people and goods between Jaffa and Jerusalem dating back to the end of the 19th century in prestate Palestine. Like the previous books in the series — for Rosh Hashahah, Sukkot and Hanukkah — this charming tale is set at the eve of the holiday.

In the “Passover Rush,” Engineer Ari is in a hurry to make his last run before the start of the seder. The sense of urgency to keep track of time for the train schedule is a perfect pairing for the story of Passover, when the Israelites fled Egypt.

His ride to Jerusalem has neighbors offering him foods for his seder plate, including a bowl of charoset made with almonds and dates, a traditional Sephardi custom. Ari promises that on his return route, he’ll deliver newly baked matzah in exchange.  As he arrives back in Jaffa in the nick of time, he and his neighbors swap the Jerusalem matzah for the seder plate foods. 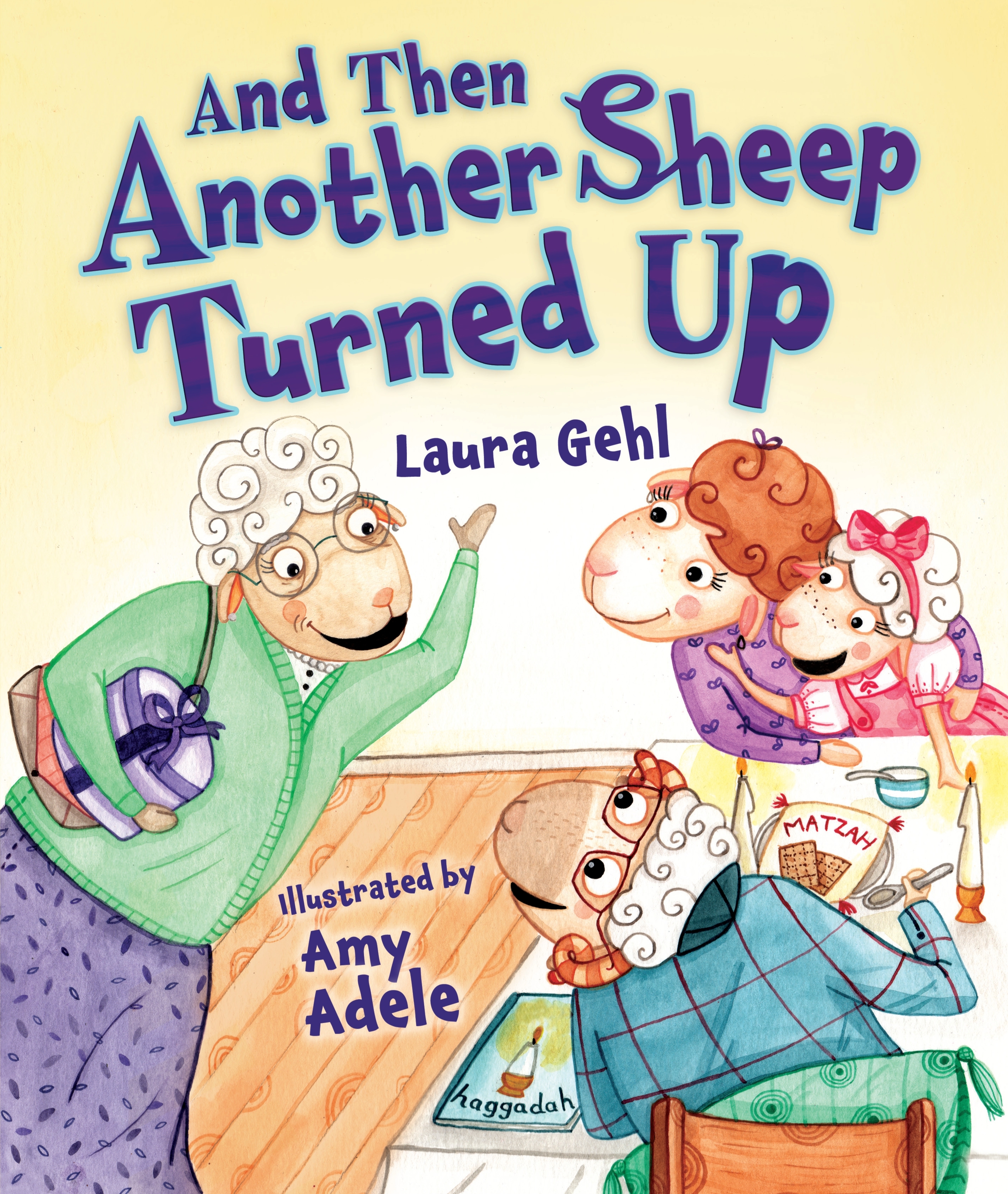 Unexpected visitors appear on each page of “And Then Another Sheep Turned Up.” (Courtesy of Kar-Ben Publishing)

Young kids will enjoy the fun adventure, which also introduces the elements of preparing the Passover seder.

The cartoon-like illustrations by the Israeli artist Kober will delight young readers, with animated characters dressed in colorful native garb, and bustling scenes of city life and rolling hillsides and farms.

For some young readers, the biggest thrill will likely be the red locomotive, with its whistle cord that regularly announces “Toot, toot!”

As a friendly family of sheep prepares for Passover, one guest after another arrives, from grandma with the macaroons and wine to uncles and friends who arrive unexpectedly. As the seder progresses from the Four Questions to hiding the afikomen and dipping the parsley, each page brings another unexpected visitor.

Gehl’s delightful rhymes will tickle young ones. Even non-readers will join the repeating refrain, “And then another sheep turned up.” Kids will be entertained with page after page of Adele’s colorful, lively illustrations of adorable sheep having fun at Passover.

In “Scarlett and Sam: Escape From Egypt,” twins go back in time. (Courtesy of Kar-Ben Publishing)

When twins Scarlett and Sam bicker about who is going to recite the Four Questions at the seder, their magical Grandma Mina cuts the squabbling short: “Tonight, at the Seder, we don’t just tell the story of Passover. We become part of it.”

So sets the stage for Kimmel’s time-travel Passover adventure that transports the duo to the Egyptian desert, back to the time of Moses and Aaron as they prepare to lead the Israelites out of slavery in Egypt. The Ten Plagues, Pharaoh’s palace, and the suffering and indignity endured by Israelite slaves come alive for the siblings, who manage to make a podcast of their experience.

Older readers familiar with Kimmel’s hugely popular illustrated books (“Hershel and the Hanukkah Goblins,” “Anansi and the Moss-Covered Rock” and “The Chanukkah Guest”) will again enjoy his deft humor and flair for storytelling in the illustrated chapter book that will appeal to school-age kids. It’s a terrific pairing with Kimmel’s earlier “Wonders and Miracles,” a lavishly illustrated seder companion that explains and demystifies the customs and traditions.