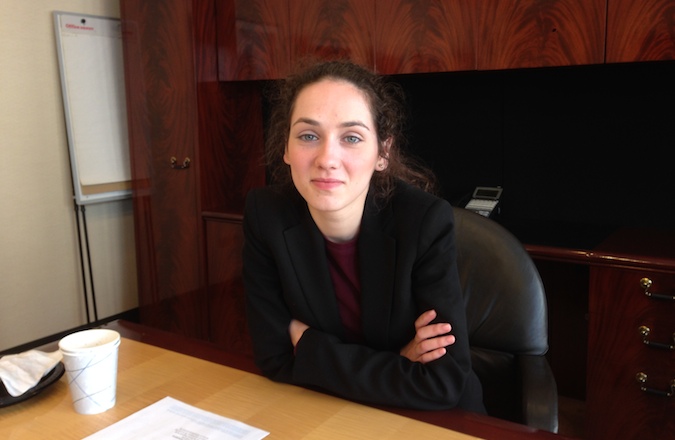 (JTA) — Masha Shumatskaya never imagined she would be a war refugee, even after that first night last spring when she dragged the mattress off her bed and into her windowless hallway to protect herself from flying glass in the event a bomb shattered her windows.

But after weeks of fighting between Russian-backed separatists and the Ukrainian military in her native Donetsk, Shumatskaya, 23, had had enough.

Shumatskaya is one of thousands of Jews who have fled rebel-held areas of Ukraine since the outbreak of war there following the Maidan Square demonstrations of 2013 and Russia’s annexation of Crimea last year. She now lives in Kharkiv, a city in central Ukraine about 200 miles away.

It has been almost a year since Russian-backed forces took control of Donetsk and proclaimed it the newly independent Donetsk People’s Republic. About 15,000 Jews once lived in the city — a majority of the 23,000 or so Ukrainian Jews who resided in territories now controlled by separatists. An estimated half of those Jews have since left. Overall, Ukraine now has some 1 million internally displaced persons.

Friends gave her a place to sleep when she arrived in Kharkiv with her boyfriend, but when the two set out to rent an apartment on their own, they encountered hostility from locals suspicious of anyone coming from rebel-held territories. They eventually found a place and got help with the first two months’ rent from Hesed, the Jewish welfare organization run by the American Jewish Joint Distribution Committee.

It wasn’t Shumatskaya’s first contact with Hesed, but it was the first time she had ever been on the receiving end of its assistance. Back in Donetsk, Shumatskaya supplemented her studies with Jewish volunteer work, raising money and delivering food packages to a small group of elderly Jews in need.

In Kharkiv, she picked up right where she left off, volunteering at a JDC call center contacting Jews in the rebel-held city of Lugansk to see if they needed food, medicine or heating oil. She continued volunteering even after she found work as an English tutor. Three weeks ago, on the holiday of Purim, she and friends collected about $400 for needy elderly Jews in Donetsk, which she sent as cash with trusted couriers because the banks in Donetsk have been closed for months.

With Ukraine wracked by inflation, those remaining in rebel-held areas are in dire straits. Bread prices have more than doubled over the last few months, and basic necessities like milk and gasoline are in short supply. JDC has added 2,700 new clients to its Jewish welfare lists since the fighting began.

“We’re facing a crisis of families suddenly getting poor,” said Oksana Galkevich, JDC’s Ukraine communications and government affairs director. “The Hesed centers enable us to react because we have them in place there. But this crisis – so far, we don’t see an end to it.”

Until a few weeks ago, Shumatskaya’s parents were among the newly destitute stuck behind in Donetsk. Shumatskaya’s mother was forced to join Hesed’s welfare rolls, sharing the aid she received with non-Jewish neighbors and her ex-husband, Shumatskaya’s father, who is not Jewish. They talked often about leaving, but Shumatskaya’s father was reticent to leave his house for fear of looters. His roof was severely damaged when a rocket destroyed a neighbor’s dwelling.

With no end to the crisis in sight, a few weeks ago Shumatskaya’s parents obtained the documents they needed to pass through rebel-held and government checkpoints and arrive at a village in western Ukraine.

With occasional shelling persisting in and around rebel-held areas despite the declaration in February of a third cease-fire, Shumatskaya’s mother recently began the process of immigrating to Israel. Already in the first two months of this year, some 963 Jews have moved to Israel from Ukraine, compared to 288 over the same period last year. In 2014, aliyah from Ukraine reached 5,840 persons, a 190 percent increase over the 2,020 who immigrated in 2013.

Shumatskaya recently wrapped up a visit to North America, where she spoke to Jewish audiences about the struggles in her home country. In a conversation at JDC’s offices in New York, she said she used to think she would be away from her hometown only for a few months but now she doesn’t think she’ll ever return to Donetsk.

“I don’t know how much time it will take to recover — 10 years, maybe 20,” Shumatskaya said. “My friends and I, we didn’t want to become war refugees. But here we are.”