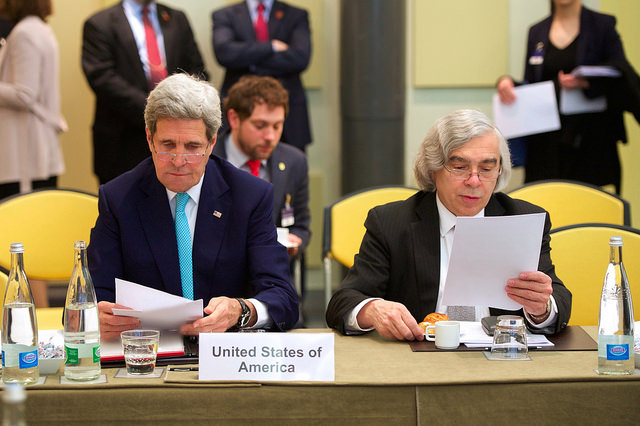 (JTA) — A framework for a nuclear deal with Iran has been reached, but significant hurdles remain.

At a White House news conference on Thursday, President Barack Obama said that the United States and the five other world powers negotiating in Switzerland had reached a “historic understanding with Iran” on a deal that, if fully implemented, would prevent Iran from acquiring nuclear weapons. The deadline for a comprehensive agreement is June 30.

“It is a good deal” that would “cut off every pathway” to an Iran nuclear weapon, Obama said of the deal reached in Lausanne two days after the negotiators’ self-imposed deadline. “If this framework leads to a final comprehensive deal, it will make our country, our allies and our world safer.”

* Iran will not develop weapons-grade plutonium, and the nuclear facility at Arak will be dismantled and its fuel shipped out of the country.

* Iran’s installed centrifuges will be reduced by two-thirds, and Iran won’t enrich uranium using advanced centrifuges for at least 10 years.

* International inspectors will have unprecedented access to Iranian nuclear facilities and their entire supply chain.

In exchange, Iran will get relief from certain U.S. and U.N. sanctions, and the relief will be phased in as Iran takes steps to meet its end of the bargain. If Iran violates the deal, the sanctions will “snap back,” Obama said. The president did not specify what sanctions would be lifted or which would remain.

Obama said the deal ensures that Iran’s “breakout time” for acquiring a nuclear weapon is at least a year and imposes strict limitations on Iran’s nuclear program for at least 15 years.

Anticipating criticism from overseas and in Washington, Obama said he will speak to Prime Minister Benjamin Netanyahu of Israel on Thursday about the deal and already has spoken with the Saudi king, whom Obama invited to Camp David along with several Persian Gulf allies to discuss strengthening security cooperation. The Sunni Arab regimes in the Persian Gulf, including Saudi Arabia, have expressed grave concerns about America’s rapprochement with Tehran, a Shiite rival.

“The smiles in Lausanne are detached from wretched reality in which Iran refuses to make any concessions on the nuclear issue and continues to threaten Israel and all other countries in the Middle East,” Steinitz said in a statement. “We will continue with our efforts to explain and persuade the world in hopes of preventing a bad (final) agreement.”

Obama also said his administration will be engaging with Congress in the coming weeks. Congress can scuttle the agreement if it can muster a veto-proof majority to negate the deal, uphold existing sanctions or impose new ones on Iran.

“The issues at stake here are bigger than politics; these are matters of war and peace,” Obama said.

The president argued that the alternatives to the deal – bombing Iran or imposing additional sanctions – would do less to set back Iran’s nuclear program than the agreement.

“A diplomatic solution is the best way to get this done and offers a more comprehensive and lasting solution,” Obama said. “It is our best option by far.”

He also cautioned that many details have yet to be worked out before the deal can be completed.

“Those details matter,” he said. “Our work is not yet done. The deal has not been signed.

“If we can get this done and Iran follows through,” he said, “we will be able to resolve one of the greatest threats to our security, and to do so peacefully.”