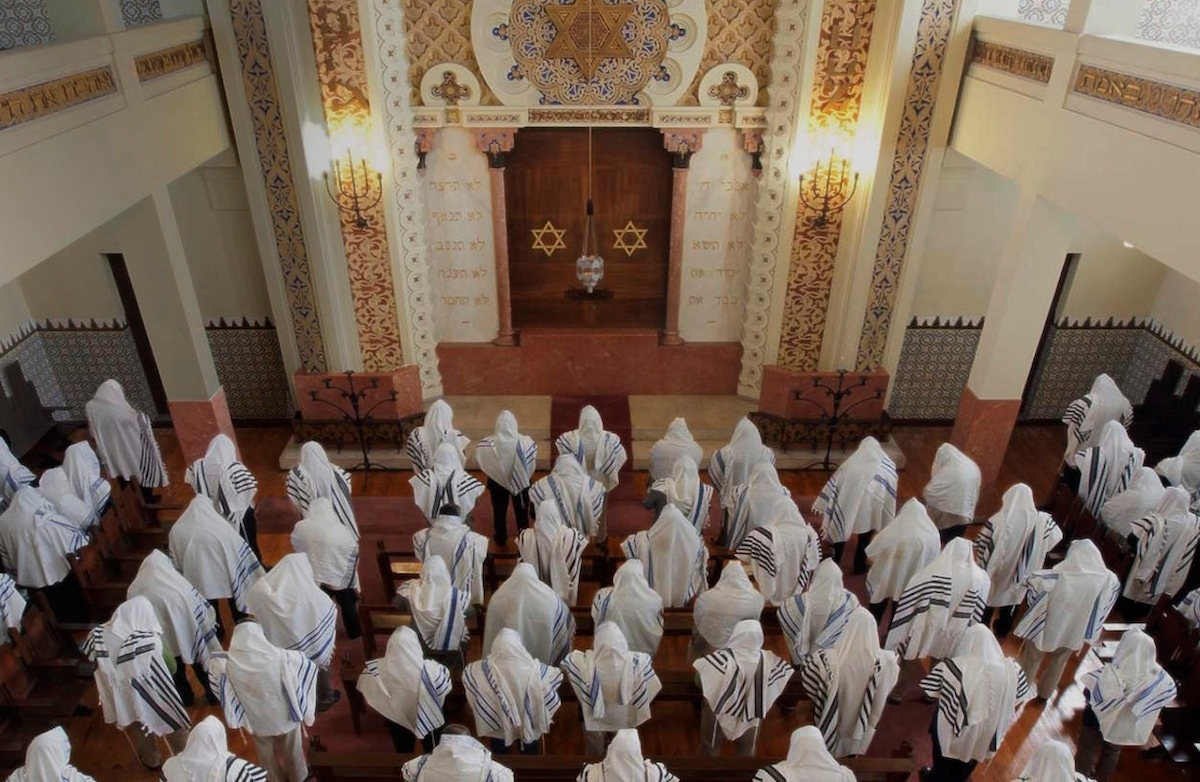 Congregants praying at the Kadoorie synagogue in Porto, Portugal, May, 2014. (Courtesy of the Jewish community of Porto.)
Advertisement 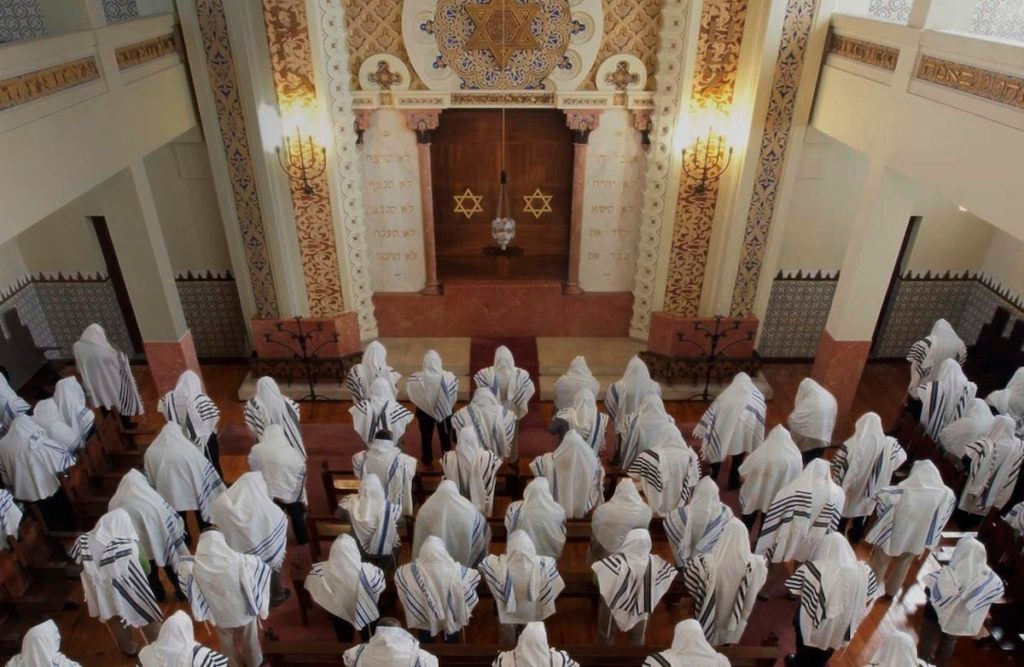 Congregants praying at the Kadoorie Synagogue in Porto, Portugal, May 2014. (Courtesy of the Jewish community of Porto)

(JTA) — Hunched over a monument for thousands of Jews killed in a 1506 massacre in Lisbon, Danielle Karo (not her real name) felt a swelling in her eyes.

To Karo, an American poet and business analyst who is descended from one of Sephardic Jewry’s greatest sages, the massacre is not just ancient history. It is emblematic of the persecution that motivated her to apply for Portuguese citizenship under a 2013 law granting citizenship to the descendants of Sephardim, the term used to refer to Jews who once lived in the Iberian Peninsula.

“I think Portugal’s law is a beautiful thing,” said Karo, who asked to be identified by a pseudonym because she works in Muslim countries in the Middle East. “But when I think of the persecution that my family endured there, I also believe it’s Portugal’s duty.”

Karo is the first of approximately 300 people who have applied for citizenship under the law, according to the Jewish communities of Porto and Lisbon, which must vet naturalization requests for the government. The law, which became effective last month, makes Portugal only the second country in the world with a law of return for Jews.

To qualify for citizenship, applicants must demonstrate that they belong to a Sephardic Jewish community or have Sephardic ancestry. They must also provide certificates proving they have no criminal record and a birth certificate authenticated by a Portuguese consulate in their country of residence, among other documents. The law does not require applicants to travel to Portugal. 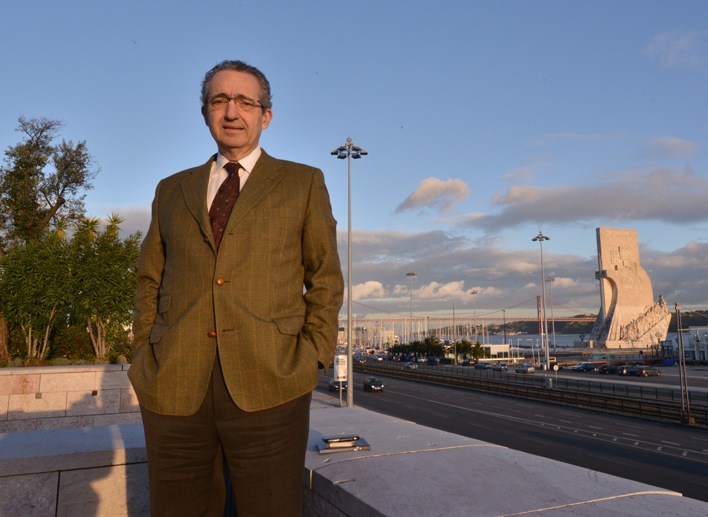 Jose Ribeiro e Castro, a lawmaker in Portugal who co-authored the country’s law of return for Sephardic Jews, says he is more proud of the law than anything else he has accomplished in politics. (Cnaan Liphshiz)

So far, the Porto and Lisbon communities have certified the Sephardic ancestry of about 200 applicants. In Lisbon, most applicants come from Israel, according to Jose Oulman Carp, president of the capital city’s Jewish community. In Porto, 55 of the 100 certified are Turkish Jews, according to a progress report released by that community on March 31.

As yet, the applicants have not received a response.

Karo, an avid traveler and former student at the University of Edinburgh, claims decent from Joseph Karo, a 16th-century Spanish rabbi who authored one of the principal codifications of Jewish law. She concedes that beyond providing symbolic closure to her ancestors’ deportation in the 16th century, a Portuguese passport would have “some practical uses,” such as automatic work and study visas in all 28 European Union member states.

Still, Karo insists that the decision to apply for citizenship “is mostly an emotional drive” born of pride in her Sephardic ancestry.

“It’s something that’s a part of me, so I applied straight away,” she said.

Portuguese politicians responsible for the legislation have cited similar motivations. Jose Ribeiro e Castro, a conservative politician who was among the law’s co-authors, said he intended the legislation to serve as belated reparation for the expulsion of hundreds of thousands of Jews from the Iberian Peninsula in the 15th and 16th centuries.

“In my political career, I am most grateful for having achieved this law,” Ribeiro e Castro wrote last month in an Op-Ed in the Publico daily.

James Harlow, a 52-year-old father of three from California and owner of a high-tech firm in the Silicon Valley, told JTA that Portuguese nationality would allow him to expand his business in Europe. Two Turkish Jewish business partners told JTA that they are considering an application so they can start a computer firm in the Netherlands. 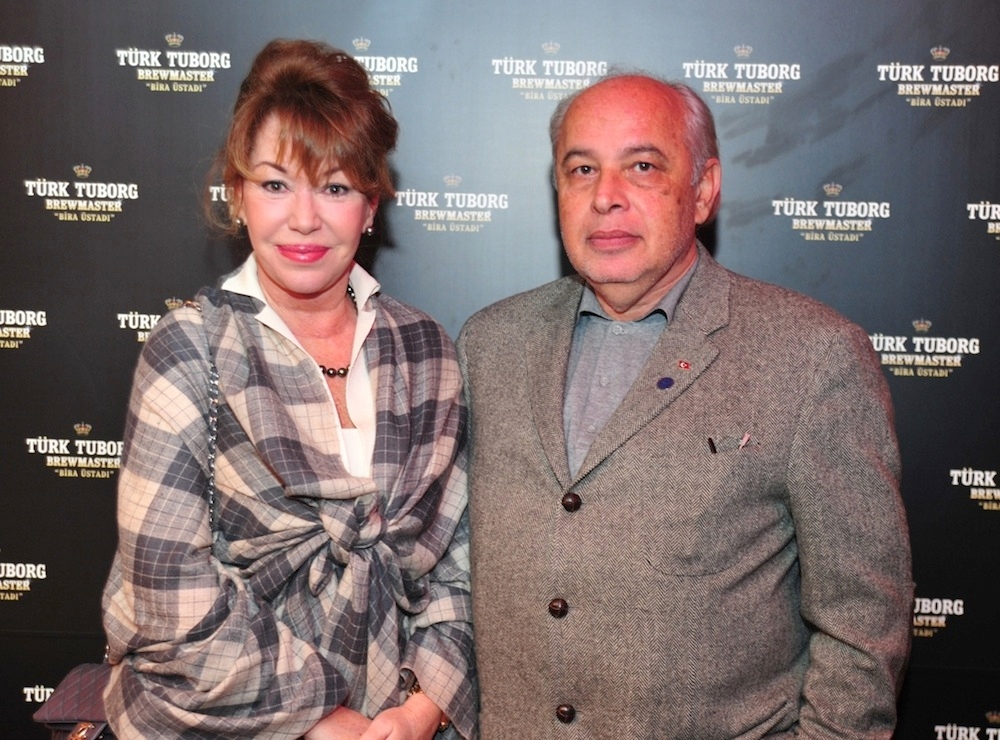 Like hundreds of thousands of Sephardim, Kamhi’s family fled to Portugal when the Inquisition began in Spain, and had to flee again when it followed them to Portugal. Kamhi already applied for Spanish citizenship under a complicated procedure put in place there in the 1990s, but was never naturalized.

“I am considering applying for Portuguese citizenship, though I don’t need it for any practical reason,” Kamhi said. “It would just be a nice closure.”

Last year, the Spanish government approved its own bill for the naturalization of Sephardic Jews that was far more permissive than the Portuguese version, but implementation has been delayed due to disagreements about the procedure. Next month, the lower house of the Spanish parliament is set to vote on a second reading of the bill, which would institute criteria beyond those required in Portugal, including subjecting applicants to a Spanish language test.

Like their Portuguese counterparts, Spanish politicians say the bill is meant to correct a historic wrong. Yet as Spain and Portugal struggle to claw their way out of an economic crisis that left them with official unemployment rates of 23 and 14 percent, respectively, the Iberian states may also see a financial incentive for attracting Jewish newcomers.

“The Sephardic Diaspora can be viewed as a large pool with the potential to benefit Spain and Portugal’s economies, provided that pool can be drawn to visit, settle and invest,” said Michael Freund, founder and chairman of Shavei Israel, a Jerusalem-based nonprofit that runs outreach programs for the descendants of Sephardic Jews.

Freund noted that tourism officials in both countries often cite the financial incentive openly in advocating for the expansion of Iberia’s well-developed network of Jewish heritage sites.

Harlow, the applicant from California, sees no contradiction between the two.

“As a business leader in Silicon Valley, I welcome an opportunity to bring capital, jobs and know-how to assist in cultivating the Oporto region,” he said. “Perhaps this would include growing muscat grapes or olives, as my ancestors did 1,000 years ago.”