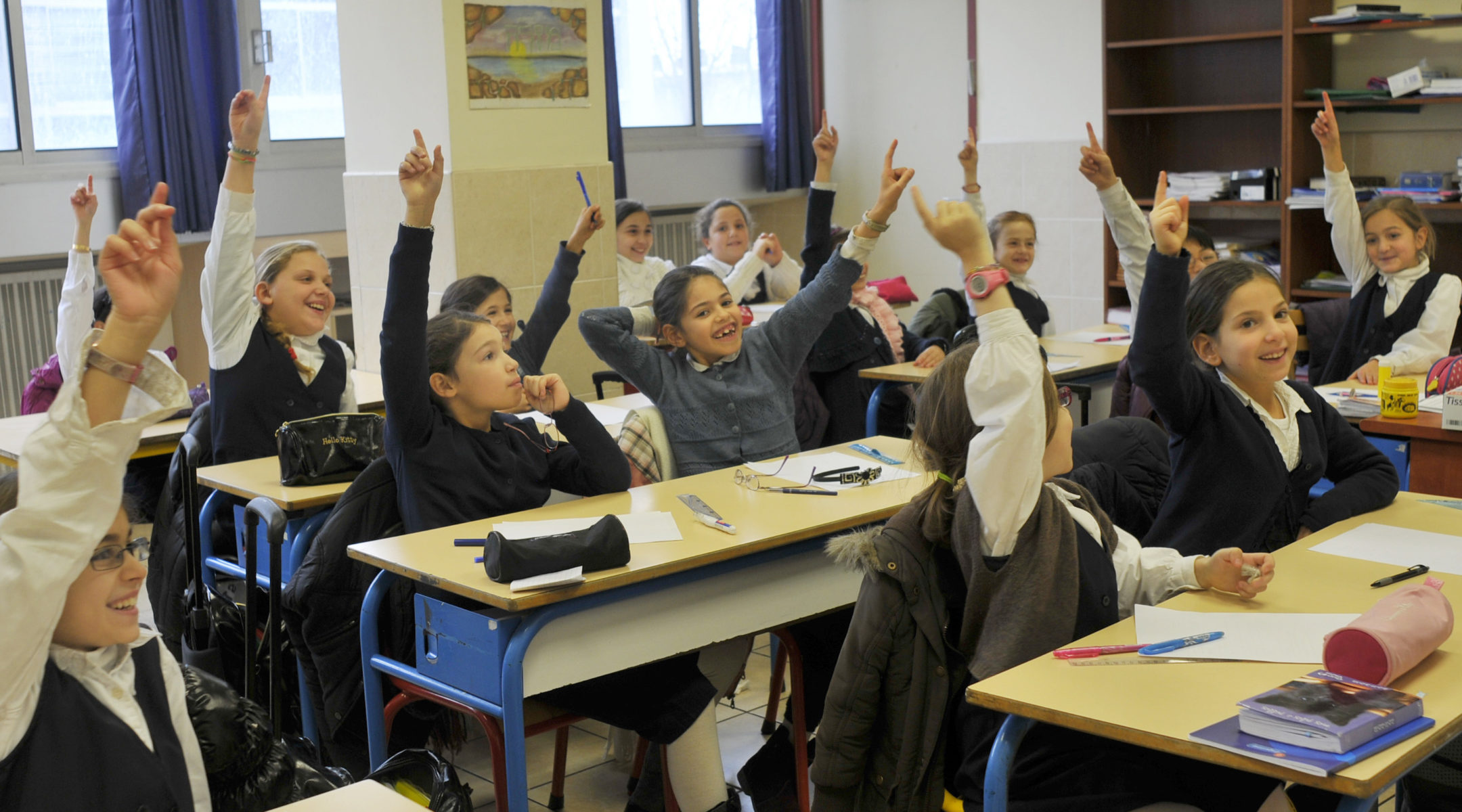 Sometimes, the reports are about controversies surrounding public funding of such institutions in a country with a strong separation between religion and state.

More often, the news is in the context of security around Jewish schools, which are under heavy protection by police and the army from Islamist fanatics like Amedy Coulibaly, who killed four Jews at a kosher supermarket on Jan. 9; apparently a fender bender resulted in the foiling of his earlier plan to attack a Jewish elementary school.

Last week, however, Jewish schools were in the news in France because they topped two of the annual lists in which French media rank the country’s approximately 4,300 high schools.

The Beth Hanna high school, which is part of France’s Chabad Lubavitch network, clinched the first spot on the list compiled by Le Parisien daily, thanks to a 99-percent success rate among matriculation exams takers and 32 “added value” points, which are determined according to additional criteria like the percentage of students who took the exams; their grade averages and dropout and attendance rates.

In the list compiled by the France Televisions public broadcaster, another Jewish school came out on top: The Lycee Alliance in the Paris suburb of Seine Saint-Denis.

French Jewish media were quick to announce France’s best high school was Jewish, presenting readers with a fresh feather in the communal hat after Patrick Modiano’s winning last year of the Nobel Prize in Literature. But a closer examination of the rankings, known in France as “les palmares des lycees,” shows the title of best high school is not such a straightforward distinction.

First of all, there are at least six reputable lists ranking French high schools, each presenting a very different selection.

The list topped by Alliance, for example, has 99 lower-ranked schools, but Beth Hanna isn’t one of them.

The Le Parisien list, on which Beth Hanna is the top school, also has 100 high schools but not Alliance.

And on the Le Figaro list, neither Jewish school made the top slot, with Beth Hanna ranked in 46 and Alliance at 88.

The variations owe to how the media that compile the lists calculate the many relevant criteria, including the number of students and faculty per class; teaching hours; languages taught and other subjects.

While the title of best high school in France may be debatable, the lists do show that even from under heavy protections that makes them resemble fortresses, French Jewish schools managed to shine last year.

As for Alliance, its naming by France Televisions as France’s best high school came as a surprise to headmistress Dominique Dahan, who told the news site JSSnews.com that it’s the first time her school receives this distinction though its performance has been consistent in recent years. About 40 percent of graduates, she said, pursue medical careers.

But the combination of scholastic excellence and the school’s emphasis on Jewish identity come at a price, she acknowledged.

“Effectively, there is a break with the exterior world on all levels: cultural, social and religious,” she told JSSnews when asked whether her Jewish school was in fact insulated from French society. The school tries to counterbalance this insularism by involving its students in charity work and cultural excursions to the Louvre and the Paris Opera, Dahan said.

“Ours is a tolerant, open Judaism,” Dahan added, “and we encourage its implementation [as part] of the urban environment.”