‘It Shoulda Been You’ has laughs, but little originality 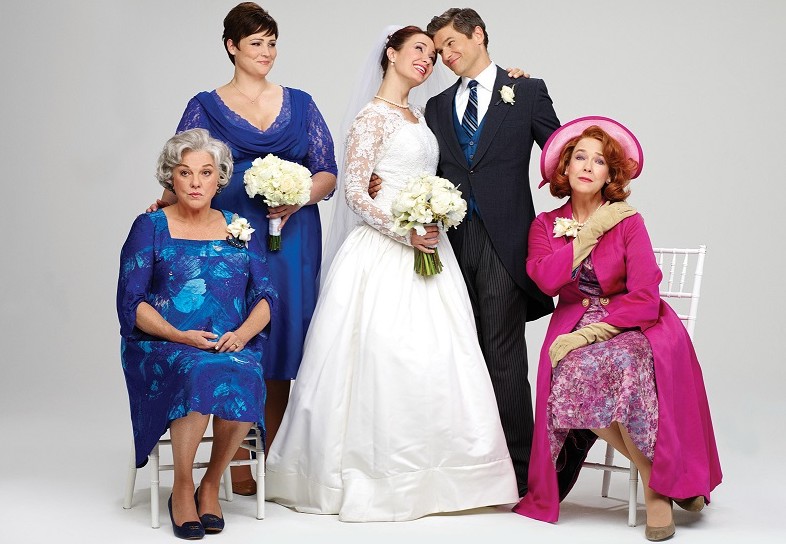 For a musical comedy that traffics in stereotypes and has a weak score, “It Shoulda Been You,” which opens on Broadway on April 14, does surprisingly well when it comes to the gauge of audience laughter.

Directed by David Hyde Pierce and with a cast full of recognizable faces, the show pits a Jewish mother played by Tyne Daly (“Judy Steinberg”) against WASP mom Harriet Harris (“Georgette Howard”) whose children are about to wed.

The Jewish mom dutifully frets about her daughter’s union to a non-Jewish boy (“Everyone knows you never marry in your goyim phase”), while the WASPy mom is typecast as the tippler who condescends to her son’s new Jewish in-laws: “Don’t be silly, dear. ‘Dreidel, Dreidel’ is my new favorite song,” she says at one point. You could be forgiven for thinking this show, which premiered in New Jersey in 2011, is half a century old.

The two actors who play Daly’s Jewish daughters – Lisa Howard and Sierra Boggess — don’t look the part and mangle the Yiddish phrases they toss around in a bid for authenticity (they can’t really pronounce the Hebrew chet sound).

Nevertheless, the cast’s energy yukking it up through quick-moving sequences lifts the production and makes this largely formulaic storyline funny. Edward Hibbert has a delightfully droll turn as Albert the wedding planner, and the singing by Howard, who plays the sister of the bride, emerges as a bright spot for this mostly forgettable score.

A twist about 20 minutes before the ending brings this dated plotline into the 21st century, but it comes too late to turn the show into something really surprising and compelling.

“It Shoulda Been You” is playing at Brooks Atkinson Theater in New York.