At Cannabis Seder, Bob Marley tunes and a blessing over the weed 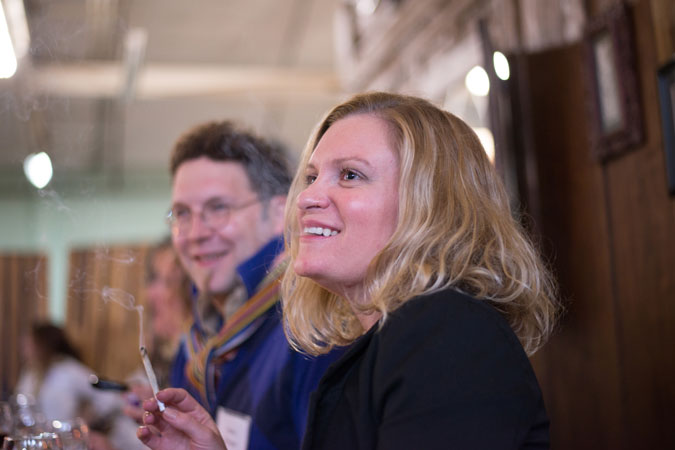 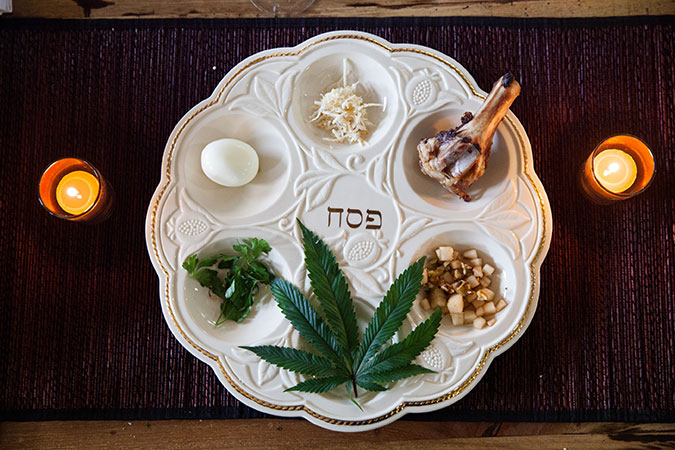 This seder included a legal disclaimer.

“The cannabis products at this Seder are available to OMMP cardholders only,” the sign at the check-in table read, referring to the state of Oregon’s medical marijuana program. “All others consume at your own risk.”

The fine print explained the facts: While Oregon voters legalized recreational marijuana use last November, the measure wouldn’t take effect until July 1. Portland’s district attorney had vowed not to prosecute in the meantime, but the message was clear: If I wanted to get stoned on pot chocolates, the hosts of the country’s first official Cannabis Seder bore no responsibility.

Heading into the airy warehouse where the third-night seder was held, I ran into Roy Kaufmann, one half of the married couple behind the evening’s festivities. Kaufmann – a seasoned activist – directs the advocacy group Le’Or, which since its founding last year has worked to put marijuana legalization on the Jewish communal agenda. (JTA profiled the organization in February.)

The Cannabis Seder for a New Drug Peace —  billed as a place for “an honest Jewish conversation about topics we were taught were strictly taboo – about drugs, race, and justice,” marked Le’Or’s inaugural event.

Kveller, earlier this month published an April Fools post “Blazin’ Seder: How to Incorporate Marijuana Into Your Passover Celebration.” But the Le’Or event, which brought together about 50 people, was no joke.

Seated around reclaimed hardwood tables, seder-goers parsed the failings of America’s long-running drug war — which has had devastating consequences for people of color — and passed joints to celebrate Oregon’s newfound cannabis freedoms.

In the absence of a prayer for cannabis, Kaufmann – author of the Drug War-themed Haggadah that guided our seder – borrowed from the Havdalah ritual. The prayer “Blessed are you, Lord, our God, the king of the world, who creates myriad spices” —  traditionally recited over the fragrant spices at the close of every Sabbath — became the de facto ganja blessing.

Later, a vocal soloist led us in singing Bob Marley’s “Redemption Song” (“Emancipate yourselves from mental slavery/None but ourselves can free our minds.”), and we chanted the Shema prayer to the beat of an African djembe drum.

Le’Or’s major sponsor, Dr. Bronner’s Magic Soap Company President David Bronner, was seated at my table, along with his partner in hemp activism, Adam Eidinger. Eidinger had flown in from Washington D.C., where he led last year’s successful campaign to legalize recreational marijuana use in the nation’s capital.

Other seder guests included Marsha Rosenbaum and Amanda Reiman of the Drug Policy Alliance – a driving force behind marijuana legalization efforts nationwide – and Diane Goldstein, a 53-year-old retired police lieutenant from Redondo Beach, Calif., who traded in her badge to speak out against the Drug War.

At the Le’Or seder, while some Passover rituals were left intact – the washing of the hands, for one – most were subject to reinvention. Even the seder plate looked different from all other seder plates: As a symbol of freedom and protest, a marijuana leaf had been substituted for the usual piece of lettuce.

By the time the seder meal (wild-caught salmon) was finished, glass Mason jars previously stuffed with Oregon’s Finest cannabis flowers sat empty, and the spread of dark chocolate truffles “made with full extract cannabis oil,” according to the Leif Medicinals label, had been plundered.

What remained was a sordid array of hemp wick, unopened jars of cannabis butter and a room full of activists who committed to ending America’s Drug War in the name of the Jewish ideal of tikkun olam, or building a better world.