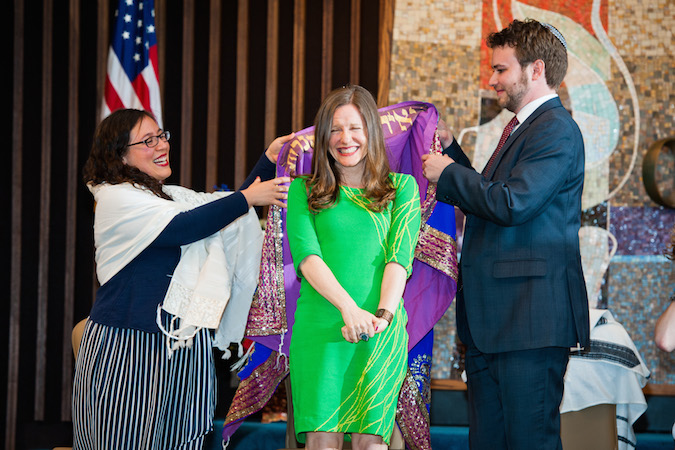 NEW YORK (JTA) — The Reconstructionist movement is on the cusp of making a historic decision about whether to drop its longstanding ban against intermarried rabbinical school students.

If the policy change passes, as most expect, Reconstructionism would become the first of America’s four major Jewish religious denominations to ordain intermarried rabbis.

Supporters of the change argue that the ban hews to an outdated way of defining Jewish identity and community, and that eliminating the ban would reaffirm Reconstructionism’s commitment to progressivism and inclusivity. In 1985, the movement was the first among the major Jewish denominations to ordain openly gay rabbis. And it embraced its first woman rabbi in 1974,  just two years after the Reform movement. Last year it became the first to install a gay rabbi, Deborah Waxman, at the helm of its flagship seminary, the Reconstructionist Rabbinical College.

“The Jewish world should steer away from looking at those who marry non-Jews as second-class citizens,” Rabbi Doug Heifetz of Oseh Shalom, a Reconstructionist congregation in Laurel, Maryland, told JTA. “Reconstructionism is based on the idea of Judaism as an evolving religious civilization of the Jewish people. We can’t expect our demographic profile to be exactly like what it was 50 to 100 years ago. I think it’s appropriate for us to at least discuss rabbinic policies that reflect the changing nature of the Jewish people.”

For opponents of the change, dropping the ban — which bars admission to the Reconstructionist Rabbinical College or ordination to those with non-Jewish partners — would undermine the movement’s commitment to Jewish peoplehood and the legitimacy of Reconstructionist rabbis within the wider Jewish world.

“We think it’s a misguided, wrong decision to take,” Rabbi Ron Aigen said of his congregation, Dorshei Emet in Montreal. “We don’t think it promotes peoplehood. It undermines the credibility of rabbis who are trying to promote in-marriage. If rabbis can model intermarriage, then it doesn’t help make the case for trying to create Jewish families that are totally committed to Judaism. And we don’t think it’s going to bring in better students.”

This issue is different from ordaining gay or female rabbis, Aigen said, because marrying a non-Jewish partner is a matter of choice.

Rabbi Lester Bronstein of Bet Am Shalom in White Plains, New York, who wrote a widely circulated letter within the movement warning that the change would take Reconstructionism in a “new and unrecognizable direction,” assigning equal value to in-married unions and intermarried ones, and dramatically altering the idea of Jewish peoplehood in ways that would be bad for the Jewish people.

“I believe in continuing to privilege in-marriage, for all the emotional, historic, and even statistical reasons I have always believed in it,” Bronstein wrote, referring to data that show children of intermarriage are far less likely to be Jewishly engaged than children of in-married parents. Bronstein wrote that if the policy changed, his congregation would consider quitting the movement.

“It feels like a deal breaker for me,” Bronstein told JTA.

Though movement leaders are loath to talk about it, the Reconstructionist movement is also considering the policy change for a practical reason: Classes at the rabbinical school, which is in the Philadelphia area, have become so small that the viability of the entire seminary is at risk. Last year it ordained just six new rabbis.

“The question becomes, can the college survive — period,” said one recently ordained Reconstructionist rabbi who asked that her name not be used. “You have a small teaching faculty and a lot of layers of administration. If you’re going to have classes of two students, it’s very hard to justify this whole structure.”

“Peoplehood is widely seen — by individuals and organizations alike — as an end in and of itself rather than a means to an end. This is counter to classical and contemporary Reconstructionist aspirations,” she wrote. “The Jewish people in America are moving from being primarily a community of ‘descent’ (that is, defined by biology) to a community of ‘consent.’ In the face of many choices and porous boundaries, the challenge to ‘communities of descent’ is to find ways to renew ourselves so that our children might choose to devote their energies to us even after experiencing opportunities for affiliating with other groups and other types of people.”

Launched by the late Rabbi Mordecai Kaplan, the Reconstructionist movement envisions Judaism as a constantly evolving religious civilization stemming from Jewish history and culture. It really came into its own in the 1960s, when several Reconstructionist congregations formally took root and the college was created. The movement now has more than 100 congregations across North America, with some dually affiliated with other liberal denominations — making Reconstructionism a distant fourth to America’s three main Jewish denominations.

FROM THE JTA ARCHIVE: 1982 – Reconstructionist panel agrees intermarried families should be welcomed into Jewish community

The movement already has some intermarried rabbis — men and women whose unions were consecrated after ordination. Rabbi Michal Woll, who leads the Ann Arbor Reconstructionist Congregation in Michigan, is married to a practicing Catholic who goes to Mass every Friday. Woll, author of the 2013 book “Mixed-Up Love: Relationships, Family, and Religious Identity in the 21st Century,” says the college’s rule is too arbitrary to account for contemporary Jewish life.

“That rule is too blunt an instrument for the world we live in now. It doesn’t have the ability to suss out all the complications of our lives,” said Woll, who was ordained at the college in 2007, when she was single and dating – exclusively Jews.

“There are lots of men out there who are Jewish who have no interest in Judaism, no interest in Jewish practice, and could not tolerate the fact that I’m a rabbi. If you are going to evaluate any of our partners, you should evaluate all of our partners,” she said. “Just being Jewish by label doesn’t get you very far. Is it important to me that somebody can be identified as Jewish? No. What’s important to me is that somebody has an active Jewish life.”

Supporters of the ban say the argument in favor of embracing intermarried clergy is belied by the landmark Pew Research Center’s survey of American Jews, which found that the children of intermarriages are far less likely to identify as Jewish than the children of in-married parents.

It’s not clear when the Reconstructionist Rabbinical College will make a final decision on the policy change.

“Regardless of the outcome, congregations will retain full autonomy to hire rabbis of their choosing,” Josh Peskin, the college’s vice president for strategic advancement, told JTA.

Whatever ultimately is decided, Bet Am Shalom’s Bronstein says it could splinter his congregation, one of the movement’s oldest. If the college elects to drop the ban, some members are going to insist the synagogue disaffiliate; others will insist it stay in the movement. Either way, some probably will quit in protest, he said.

Even if the ban stays in place, Bronstein faces an uphill battle winning back the confidence of intermarried congregants who feel alienated by the intensity of the debate.

“This debate has begun a process of destabilizing the stasis we’ve created here for decades so intermarrieds could feel welcome and involved,” Bronstein said. “No matter what the college decides, the worms are out of the can here.”