At Bergen-Belsen memorial, warnings and worry on Holocaust remembrance 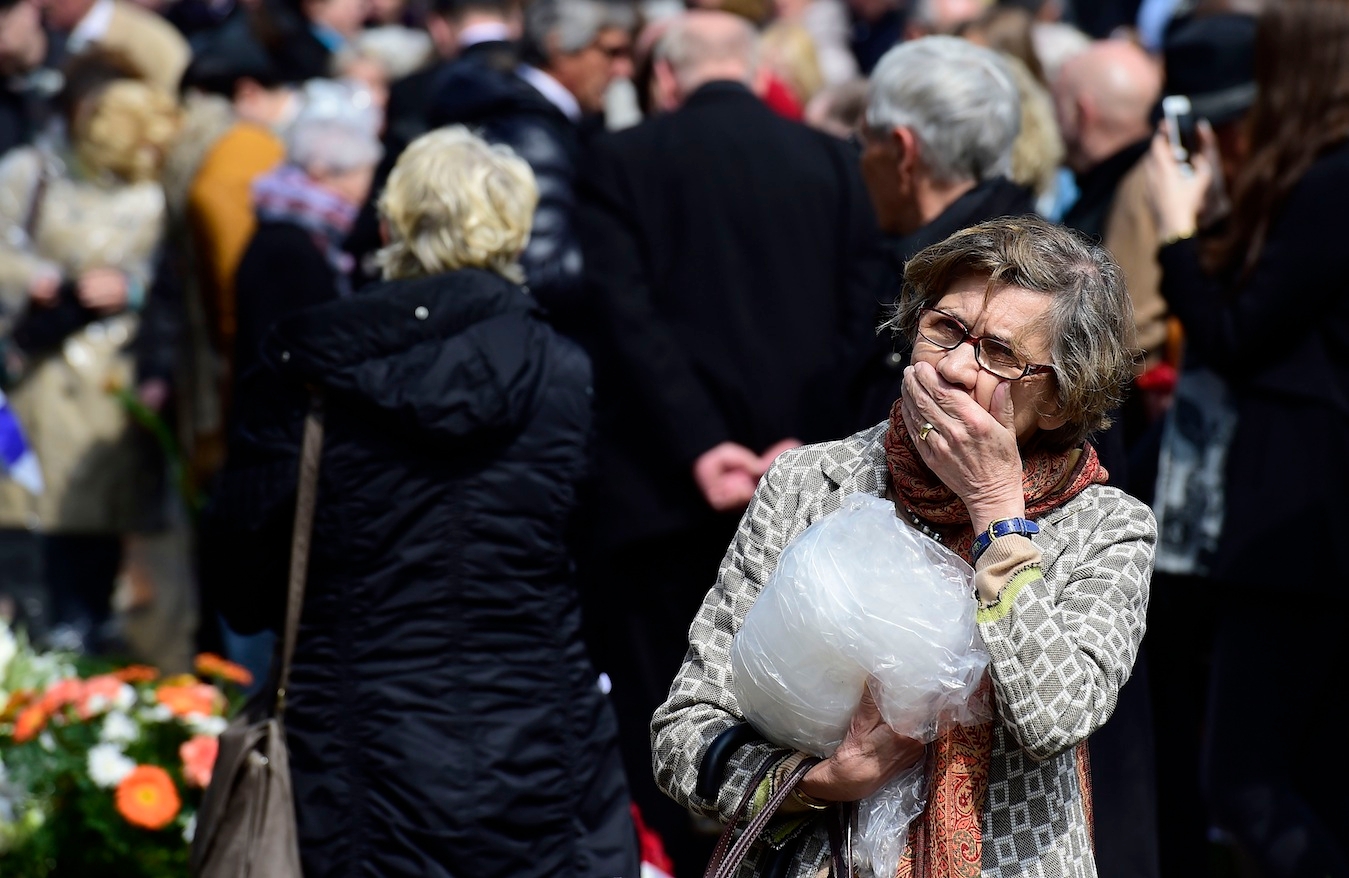 A woman attending a ceremony to commemorate the 70th anniversary of the liberation of the Bergen-Belsen concentration camp, April 26, 2015. Alexander Koerner/Getty Images)
Advertisement

LOHHEIDE, Germany (JTA) — At the former Bergen-Belsen concentration camp, hundreds of survivors, along with their children and grandchildren, stood together last weekend under gray skies on a ground alive with memories doing their part for the future.

“I ask young people to please take the right decisions in your life,” said Anastasia Gulei, 89, a Ukrainian who was imprisoned at the camp in northern Germany.

“There are people living today who admire [Nazi propaganda chief Joseph] Goebbels, and these people can push the buttons for nuclear weapons,” she added. “And this is terrible.”

“It is not enough to commemorate,” said Ariel Yahalomi, 91, a Polish Jew who now lives in Israel. “We have to warn the younger generation.”

Sunday’s gathering commemorated the 70th anniversary of the liberation of the camp, where an estimated 37,000 prisoners died between May 1943 and April 15, 1945. The event was part of a string of major commemorations at former Nazi camps this year. Among those in attendance were Joachim Gauck, Germany’s president; Stephan Weil, prime minister of Lower Saxony, the state where the site is located; Ronald Lauder, head of the World Jewish Congress; and other dignitaries.

Seven decades after troops liberated Nazi camps across the collapsing Third Reich, such ceremonies have grown heavier with speeches from politicians and religious leaders, and lighter on the contribution from the eyewitnesses themselves. 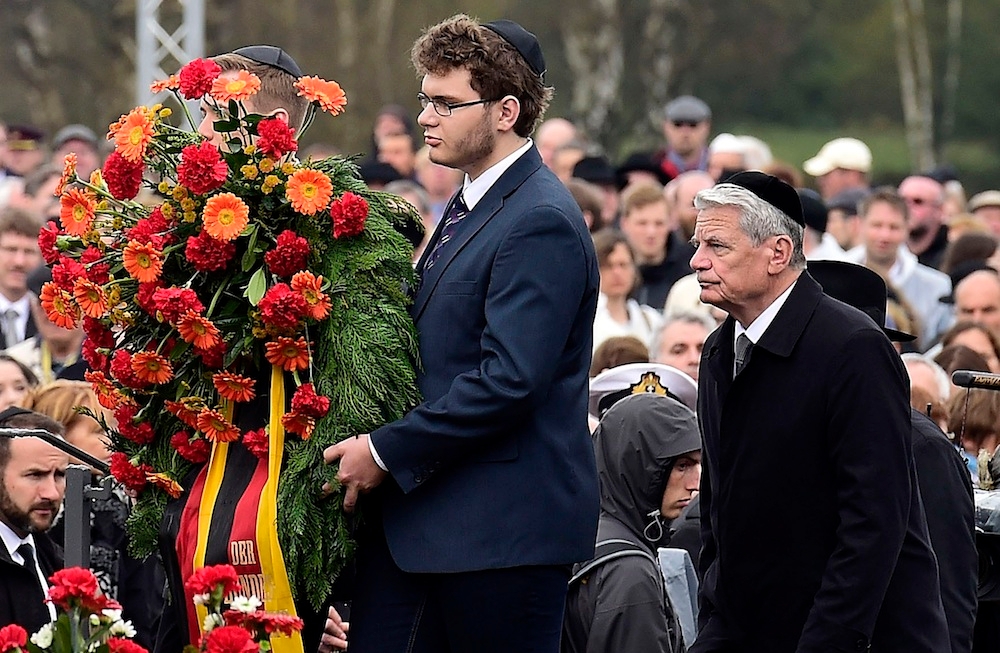 German President Joachim Gauck, right, participating in a wreath-laying ceremony at the Bergen-Belsen concentration camp on the 70th anniversary of its liberation, April 26, 2015. (Alexander Koerner/Getty Images)

With most survivors well into their 80s and 90s, some observers worry that Holocaust remembrance, even in Germany, is becoming empty and perfunctory. Some have suggested that German leaders are merely going though the motions, glad when they can go home. In some cases there have been suggestions that survivors are disrespected.

Recently, several young German volunteers complained that dignitaries attending a commemoration at the former Ravensbrueck camp were served meals on fine dishes, while visiting survivors ate from plastic plates. One volunteer told the German newspaper Die Zeit last week that there were no wheelchairs for the infirm, no kosher food available and not enough interpreters.

“We noticed a major difference between what was said in speeches and presented to the world, and the way in which survivors were encountered and treated,” the volunteer was quoted as saying, with another adding, “I was really ashamed.”

Menachem Rosensaft, who was born in the Bergen-Belsen displaced persons camp, told a group of survivors and their children at a weekend gathering prior to the official ceremony that he was worried about the future of remembrance.

“Whatever we are going to do,” Rosensaft said, “we have to do ourselves.”

At the Bergen-Belsen memorial, staff and volunteers appeared to go out of their way to make the hundreds of visitors comfortable, handing out umbrellas, plastic rain ponchos and even thermal blankets.

The commemorations have been given an added urgency by what some perceive as a potential threat against Israel from a nuclear-armed Iran.

The next war could “make World War II look small in comparison,” said Lauder, speaking in the shadow of the giant obelisk memorial erected by the British in 1952. “You cannot leave here and do nothing.”

In private conversations throughout the weekend, children of survivors shared their parents’ testimony second hand – something Aviva Tal, born in the nearby DP camp, called an honor and a duty. Carrying her parents’ memories “has never been a burden,” she told JTA. “It has always been a matter of pride, of identity.”

On Sunday, visitors walked along pathways between mounded mass graves in the former concentration camp, stopping to place tulips or Israeli flags on stone markers. Later they ate lunch in the former German barracks that had housed the postwar DP camp where Tal was born and ever since has been a British military base. The facility is about to be handed back to the German armed forces, so Sunday’s full military ceremony with bagpipes at the base cemetery was the last of its kind. Thunder rumbled in the distance as a final Mourner’s Kaddish was recited.

Yaffa Singer and Isaac Zinger — the first twins born in the DP camp — had come from Israel with several family members, including their grand-niece Lihi Tal, 16.

Tal, an aspiring filmmaker, said she would share video from her visit with schoolmates. Usually this history “seems like a movie, it’s not really felt,” she told JTA. “My job is to wake up my friends.”