Op-Ed: After Baltimore, reflecting on the chasm between black and white 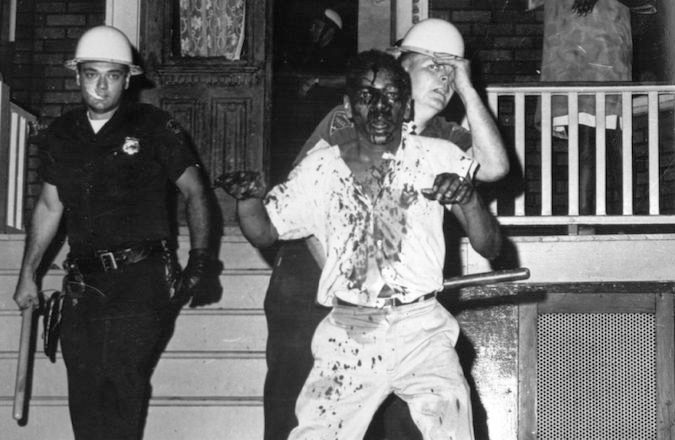 (JTA) — The Newark riots of 1967 have shaped the imagination of the New York-New Jersey area for over 40 years — probably more than they shaped the actual political and social landscape of Newark and its suburbs.

The riots often are held up as a pivotal moment in the flight of Newark’s white community and the start of a spiral of poverty that persists today.

History, however, says the forces of disintegration were in place perhaps a full decade before 26 people died and countless businesses and homes were gutted on those two hot July days. Industry, like the white middle class, was fleeing the city well before the summer of 1967. White politicians and a largely white police force were alienated from the growing black majority.

Sound familiar? The riots in Baltimore, following the funeral for Freddie Gray, a 25-year-old black man who died of spinal cord injuries while under police custody, must seem terribly familiar to anyone with memories of the Newark unrest. The curfews, the violence, the National Guard, the looting — despite all the progress we think we have made, 2015 looks awfully similar to 1967.

If there is a difference, it is that black people living in Ferguson and Baltimore have even less contact with the whites living outside these aggrieved inner cities than the two groups did in 1967. When shocked Jews watched the Newark riots that year, they had fresh memories of those streets and storefronts right before they were burned and destroyed. They knew many of the blacks caught up in the rioting as neighbors and customers. And even though they had left the city and taken their businesses and synagogues with them, they took the demise of the city they loved personally.

We have come a long way as a country, and blacks and other minorities have more opportunities than at any other time in our history. And that fact itself has led to a racial divide when it comes to the festering debate over police brutality. Whites see a black president and a growing black middle class and assume that those who can’t make it out of poverty are victims of their own choices. We regret bad and racist cops and the harassment and deaths of innocents, but also suspect that the black community as a whole is better off as a result of aggressive community policing.

Blacks, meanwhile, understand what it means to be presumed guilty for no other reason than the color of one’s skin. They watch their sons head out into the evening and know the fear that the wrong gesture or look could be interpreted by a jumpy police officer as a threat. They despair of seeing open-and-shut cases of police brutality end without indictments, let alone convictions.

Whites, I am guessing, are more likely to see the violence in Baltimore as self-destructive and opportunistic, an unjustified assault on civic manners and public property that hurts the perpetrators more than anyone else. Looking for “root causes,” we think, only rewards violent behavior. The only grievances we should pay attention to, wrote one Facebook friend, are those delivered in petitions, in letters to the editor and in calls to elected officials.

Blacks better understand the frustration that leads to these kinds of explosions. They demand to know where your concern for person and property was when it was cops committing the violence, and black men and women suffering the consequences.

Out of professional curiosity and ethnic loyalty, I checked in with how the Jewish press in Baltimore was covering the unrest. The Baltimore Jewish Times reported on Rabbi Daniel Cotzin Burg, who has forged strong bonds between his Reservoir Hill synagogue and the predominantly African-American community around it. The paper noted that representatives of Jews United for Justice took part in a huge and peaceful march against police heavy-handedness.

“The ideal represented by Burg and others of the Jewish protestors who stood side-by-side with residents of Sandtown — where Gray was from — is one that we should all share,” wrote Joshua Runyan, the paper’s editor-in-chief. “They note that while the media frequently focuses on the aftermath of rage, far too little attention is paid to the underlying causes of that rage.”

As a white, middle-class Jew, I don’t know

and probably can’t understand the impulse that leads angry protesters to trash their own neighborhood. But perhaps that is because I am paying attention to a drama that started well before that point. I missed the first act, when a young man was beaten or harassed. And I didn’t see the second act, when the city quietly paid out civil judgments to settle complaints of brutality or harassment by police officers — in the case of Baltimore, $5.7 million since 2011. If you arrive late for the drama, you shouldn’t be surprised that you don’t understand it.

I received a mailing from Rabbi Arthur Waskow of Philadelphia’s Shalom Center; he is a Baltimore native. He quoted Langston Hughes: “What happens to a dream deferred? / Does it dry up / like a raisin in the sun?”

We tend to remember the beginning of that poem, but not its ending: “Maybe it just sags / like a heavy load. / Or does it explode?”

(Andrew Silow-Carroll is editor-in-chief of the New Jersey Jewish News, where this column first appeared.)