Op-Ed: What a biblical tale of rape can teach us about Baltimore riots 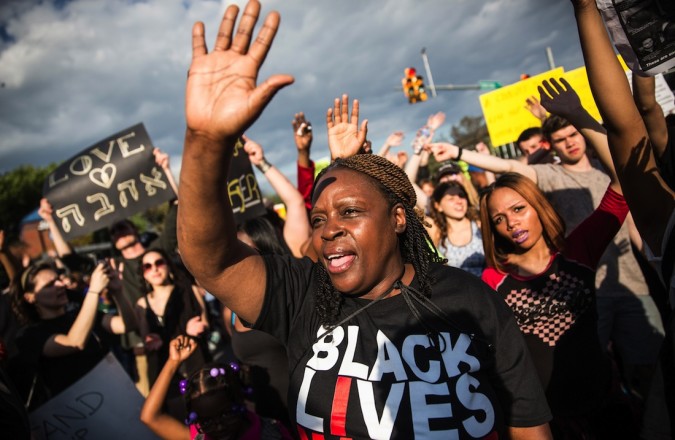 Protesters marching in Baltimore following the announcement that six city police officers would be indicted in the death of Freddie Gray, May 2, 2015. (Andrew Burton/Getty Images)
Advertisement

GREAT NECK, N.Y. (JTA) — From 2011 through 2014, the City of Baltimore paid nearly $6 million in over 100 judgments and settlements relating to false arrests, unlawful imprisonment and police brutality. Once the justice system takes its course, the family of Freddie Gray may well be added to the tally.

Though it is likely that only a small percentage of those who feel mistreated at the hands of the police ever see a settlement, the rage in Baltimore would be justified even if each and every case was paid out in full.

In the Bible, this is perhaps best illustrated by the narrative of the rape of Dinah, the patriarch Jacob’s daughter who was abducted by Shekhem, the powerful son of the local chieftain. Shekhem takes a liking to his victim, and he and his father attempt to negotiate a settlement with Jacob and his sons.

Jacob is offered a dowry and seems ready to accept the offer and make peace. But before he can, two of his sons, Simeon and Levi, massacre the town in an act of bloody vengeance. Jacob chastises them, saying, “You have troubled me, to make me odious unto the inhabitants of the land … I being few in number, they will gather themselves together against me and smite me.”

Jacob does not make a moral argument. He does not say that the people did not deserve collective punishment for allowing a great injustice to occur. Instead, he makes a practical argument — we are a minority here, and your actions have put our family at risk of reprisal from those who vastly outnumber us.

Echoes of Jacob’s words reverberate in every commentator who has wondered why the Baltimore protesters would respond to the injustice of Gray’s death by damaging their own community, or by further fraying relations between themselves and law enforcement through acts of violent protest.

Simeon and Levi do not respond by debating the practicality of their actions. They say simply, “May one deal with our sister as with a harlot?” If they had not acted, Dinah would have been married to her abductor. And though they would have received monetary restitution, the crime of her abduction would have been whitewashed away, never to be ultimately redressed. That was intolerable to them. Someone needed to say, very clearly, This Is Wrong.

We can hear the pained desire for justice and validation in their words, even as they sail by Jacob’s practical concerns like ships passing in the night. The matter is left unresolved. We are left with the tension of their two arguments — one calling for justice, the other for peace, both valid but together irreconcilable — hovering over the devastation of a ruined Shekhem, in much the same way as those irreconcilable imperatives today hover over a charred West Baltimore.

My own feeling is that although Jacob firmly rejected what his sons did, he could not reject their anger itself. His non-response was his way of telling Simeon and Levi that he heard them — not just the words they uttered, but the lived experience behind them. He could tell them they were acting against their longer-term interests, but he could not tell them that they did not have the right to be angry. After all, with his own daughter’s abduction on the verge of being legally normalized without repercussion, he probably also felt angry, powerless and delegitimized.

Even if Jacob understood that violence was not a constructive answer, he also knew that he could not tell them that in the heat of the moment — it would ring untrue. He could not credibly dismiss the sense of anger and injustice they felt because he understood it. He probably felt it as well.

Perhaps nobody embodied this approach in the modern era better than the Rev. Martin Luther King Jr. In a famous 1968 speech at Grosse Pointe, Michigan, noting the race riots that had consumed American cities in the years prior, King said, “I’m absolutely convinced that a riot merely intensifies the fears of the white community while relieving the guilt. And I feel that we must always work with an effective, powerful weapon and method that brings about tangible results.

“But it is not enough for me to stand before you tonight and condemn riots. It would be morally irresponsible for me to do that without, at the same time, condemning the contingent, intolerable conditions that exist in our society. These conditions are the things that cause individuals to feel that they have no other alternative than to engage in violent rebellions to get attention. And I must say tonight that a riot is the language of the unheard.”

For us today, the empathy Jacob demonstrated toward his sons is critical. Just as it helped him keep his family together at a moment of supreme adversity and swirling passions, we need it just as much as we try to hold together our own fractured world.

Redressing crimes and paying damages is a necessary step toward justice. But a much bolder step toward healing is to begin hearing those who are unheard.

(Rabbi Avraham Bronstein is the program director at the Great Neck Synagogue, an Orthodox congregation on Long Island.)