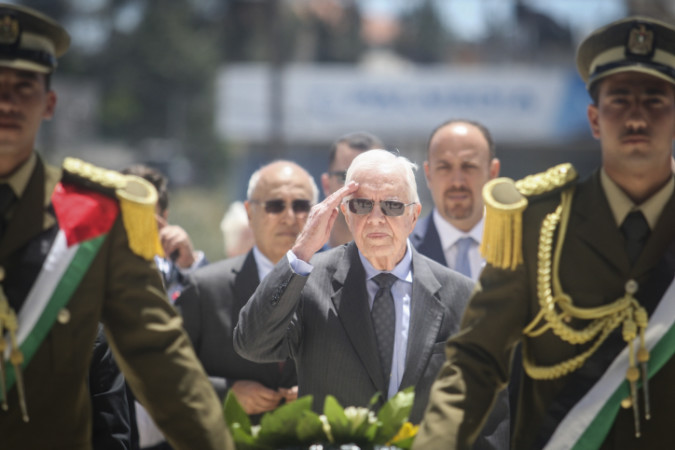 Former President Jimmy Carter saluting at a wreath-laying ceremony at the tomb of the late Palestinian leader Yasser Arafat in the West Bank city of Ramallah, May 2, 2015. (STR/Flash90)
Advertisement

JERUSALEM (JTA) — Former U.S. President Jimmy Carter said Hamas leader Khaled Meshal is in favor of the peace process with Israel and that Hamas is not a terrorist organization.

Carter also told Israel Channel 2 on Saturday that Israeli Prime Minister Benjamin Netanyahu is not in favor of a two-state solution with the Palestinians.

“I don’t see that deep commitment on the part of Netanyahu to make concessions which [former prime minister] Menachem Begin did to find peace with his potential enemies,” Carter said.

Of Meshal, the ex-U.S. leader said, “I don’t believe that he’s a terrorist. He’s strongly in favor of the peace process.” Carter added that he “deplored” terrorist acts by Hamas and would support moderate members of the group.

Carter completed a three-day visit to Israel and the West Bank on Saturday. He did not meet with Netanyahu or President Reuven Rivlin.

Israeli media had reported that Netanyahu and Rivlin turned down requests for meetings due to what they called Carter’s “anti-Israel stances.” Carter reportedly said he did not request a meeting with Netanyahu because he knew he would be turned down.

During a meeting Saturday with Palestinian Authority President Mahmoud Abbas, Carter called for Palestinian parliamentary and presidential elections in the West Bank and Gaza to reunify the Palestinians. Abbas has remained in office despite his term ending in 2009 due to the lack of an election. Abbas’ Fatah Party and Hamas signed a unity agreement last year.

“We hope that sometime we’ll see elections all over the Palestinian area and east Jerusalem and Gaza and also in the West Bank,” he said in Ramallah.

“Eight months after a devastating war, not one destroyed house has been rebuilt, and people cannot live with the respect and dignity they deserve,” he said.

Carter, who wrote a book titled “Palestine: Peace not Apartheid,” has called for the labeling of goods that originate in the West Bank, and said that the Israeli-Palestinian conflict was among the factors that led to the deadly attacks in January in Paris.