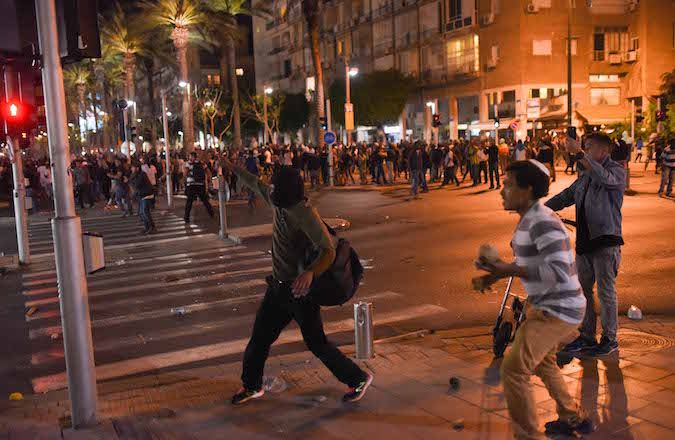 TEL AVIV (JTA) — A historically disadvantaged black minority is galvanized when one of its members appears to suffer brutality at the hands of police — and the episode is caught on video. Peaceful mass protests devolve into violence. Police crack down in an attempt to control crowds.

It’s not Baltimore or Ferguson. It’s Tel Aviv, which was rocked by unrest Sunday after a video of a uniformed Ethiopian-Israeli soldier, Demas Pakada, being beaten by Israeli police made the rounds online. Here are four things you need to know about the Israeli demonstrations.

A police beating sparked the protests.

The video that triggered the Tel Aviv protests shows Pakada holding his bicycle on an empty sidewalk. A police officer approaches him, grabs him, punches him and pushes him to the ground. Pakada then stands up and exchanges words with the officer.

Chanting Sunday in Tel Aviv, protesters invoked the name of Yosef Salamsa — a 22-year-old Ethiopian-Israeli man who committed suicide in July. Salamsa killed himself four months after police approached him in a public park and accused him of breaking into a house, then tased him before he was released. The deputy mayor of Salamsa’s coastal hometown of Binyamina, Shlomi Salame, said the police “broke his spirit,” according to the Israeli news website Walla.

But unlike in the United States, where a series of high-profile law enforcement killings of unarmed black boys and men have made headlines, until now there have been no known parallel cases with Ethiopians in Israel.

On Monday, Pakada met with Prime Minister Benjamin Netanyahu Monday along with a delegation of Ethiopian-Israeli community leaders.

But the protests are also responding to Ethiopians’ systemic challenges.

Pakada’s beating triggered the protests, including in Jerusalem several days earlier, but it also unleashed long-simmering grievances in the Ethiopian community. Protesters said they were troubled by lagging educational opportunities, discrimination when applying for government jobs and high rates of Ethiopian-Israelis in military prisons.

Israel has celebrated the approximately 125,000 Ethiopian immigrants who arrived beginning in the mid-1980s through 2013. And Israel’s government has provided a range of benefits to Ethiopian-Israelis, from free college tuition to lower mortgage rates. But challenges remain.

Ethiopian-Israelis are overrepresented in military prisons and underrepresented at the nation’s universities. And in 2012, the average Ethiopian family’s income was just over half the Israeli average.

“We want to receive rights just as we fulfill our duties,” said Yosi Minyuv, 27, an Ethiopian-Israeli who served four years in the Israeli army, including as a combat officer. “We’re second-class citizens. We want good work and they block us.” 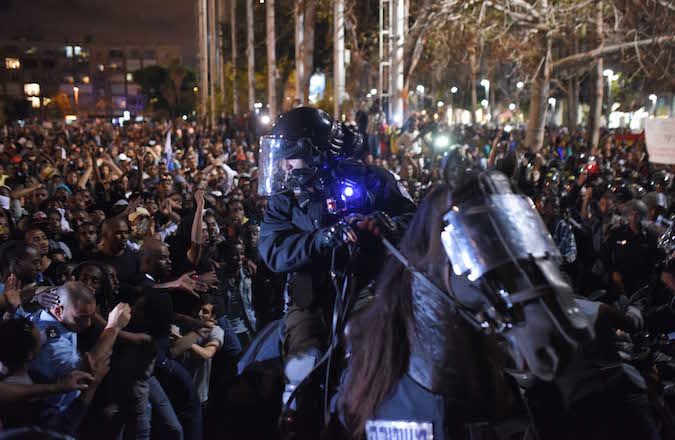 Israeli policeman trying to disperse the hundreds of demonstrators in Tel Aviv protesting on behalf of Ethiopian-Israelis, May 3, 2015. (Ben Kelmer/Flash90)

The Tel Aviv demonstration began peacefully and ended in violence.

When protesters — Ethiopian and others — first gathered in Tel Aviv on Sunday afternoon, they chanted and held signs as police stood at a distance. As the protest swelled beyond 1,000 people, the demonstrators formed a giant circle, blocking a major intersection and then marching down Tel Aviv’s central Ayalon highway.

Protesters chanted slogans like “Whether black or white, we’re all people” and “Every violent police officer needs to be put away.” They held signs with slogans such as “Being black is not a crime.” Some waved Israeli flags.

Clashes began as police cleared protesters from the highway, and violence intensified as thousands of demonstrators filled the central Rabin Square. Fighting escalated as protesters threw glass bottles and stones at police, and police responded with stun grenades and a water cannon. Demonstrators began to chant “police state” and remained past midnight.

By the time the crowds dispersed, dozens of people had been injured — including 56 police officers. Blood stained the usually tranquil square.

Despite challenges, some Ethiopian-Israelis remain optimistic.

Even as protesters vented frustrations, many of them said they felt a sense of belonging in Israel. A large Israeli flag waved over the demonstration’s early hours, and Ethiopian-Israelis at the protest proudly referenced their military service. Protesters said that after serving in the Israel Defense Forces and living in the state as loyal citizens, they didn’t feel the state treated them as they deserved.

“I gave to the state because I’m part of the country,” said Avi Sabahat, 27, who immigrated to Israel from Ethiopia at age 4. “There’s some hidden discrimination. It’s in the conscious and the subconscious. There’s been a little improvement, but you don’t feel it. There’s integration in society, but not enough.”

Dana Sibaho, a 29-year-old Ethiopian-Israeli, said that a decade ago, the older generation, who had come to Israel as adults, were too focused on their absorption to demand better treatment from the state. But she said younger Ethiopians, either born in Israel or having arrived as small children, feel empowered to demand their rights.

“Things will change,” she said. “They won’t silence us. Not like our parents, who accepted things. We know what we’re up against. Now we won’t shut up.”