Back in power, haredi parties aim to roll back religious reforms 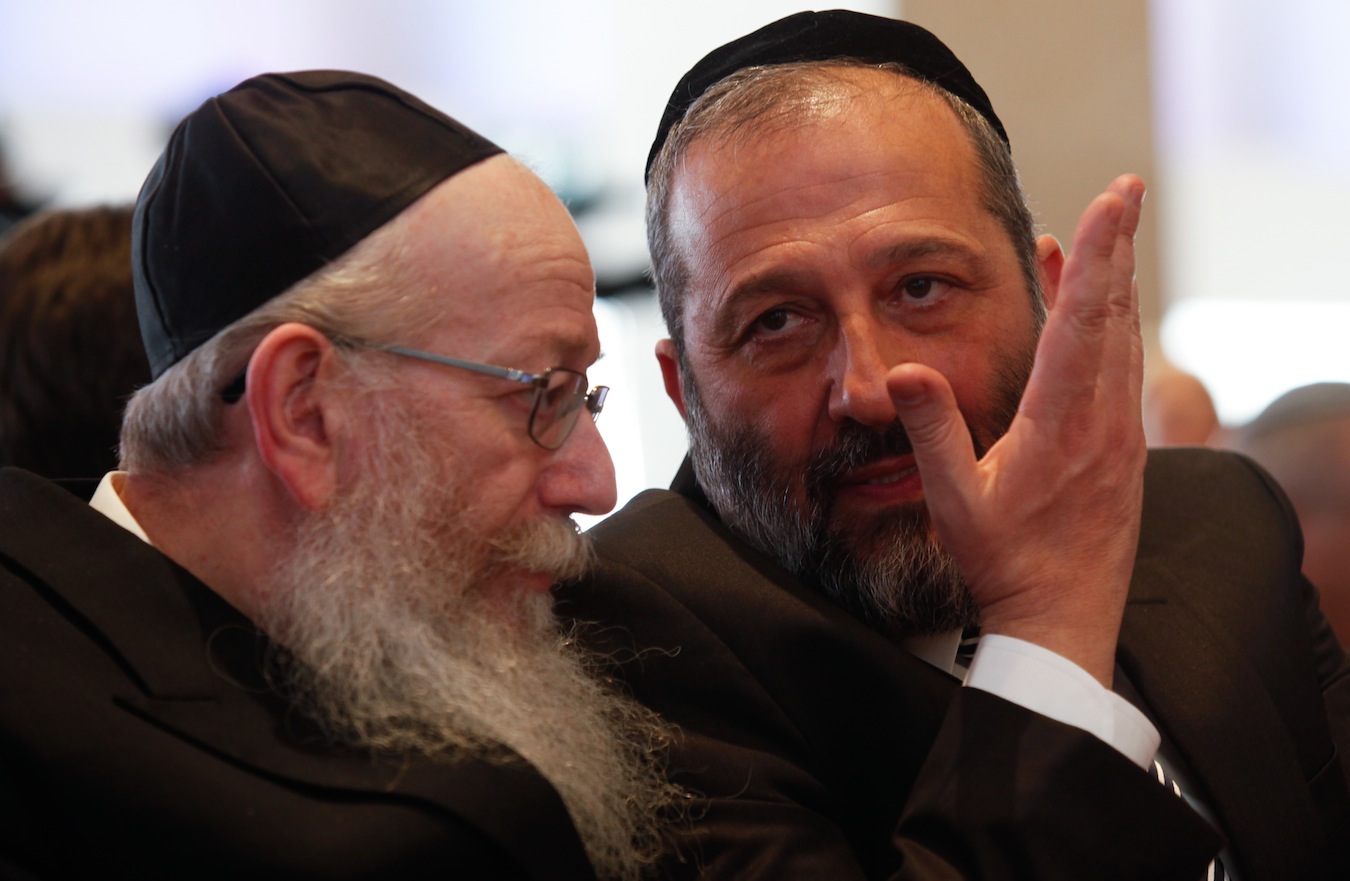 Now it appears that the incoming coalition will be organized around the opposite principle: Those changes must end.

A coalition agreement signed last week between the Likud party led by Prime Minister Benjamin Netanyahu and the haredi Orthodox United Torah Judaism faction promises to dismantle a raft of legislation enacted in the last two years that chipped away at several longstanding entitlements enjoyed by the haredi community. Shas, the Sephardic haredi party, signed its own coalition agreement with Likud this week that will cement the power of religious parties in the next government.

Led by the upstart Yesh Atid party, the last government passed laws to include haredim in Israel’s mandatory military draft and encourage the teaching of math and English in government-funded haredi schools. The government, which did not include the haredi parties, also allowed dozens of municipal Orthodox rabbis to perform conversions, vastly increasing the number of conversion courts from the four controlled by the haredim. Other laws cut subsidies to haredi yeshivas and large families, many of whom are haredi.

The Likud-UTJ agreement promises to repeal the conversion decision, increase subsidies to yeshivas and large families, and relieve haredi schools of the obligation to teach secular subjects. The agreement also gives the incoming defense minister sole authority to decide whether to implement the draft law — effectively allowing him to choose not to enforce it. A UTJ lawmaker will head the powerful Knesset Finance Committee, while Shas will control the Religious Services Ministry, which handles most religion-state policies.

“In the last Knesset, people tried to blur Judaism and to strengthen democracy at Judaism’s expense,” said Yair Eiserman, a spokesman for UTJ lawmaker Uri Maklev. “We have an opportunity in the present government to strengthen Israel’s definition as a Jewish state.”

Haredi Israelis are celebrating the agreements as a return to a comfortable status quo, but advocates for religious pluralism are struggling to figure out how to advance their cause, which has significant public backing. A September poll by the religious pluralism advocacy NGO Hiddush found that two-thirds of Jewish-Israelis back legalizing civil marriage and 64 percent support recognizing Conservative and Reform conversions. A 2011 Hiddush poll found that 87 percent of Jewish-Israelis supported the drafting of haredim into the Israel Defense Forces.

“The public needs to tell its leaders what it wants,” Knesset member Ofer Shelach of Yesh Atid told JTA. “The public’s role doesn’t end with voting in the election. The public needs to make clear that if a majority of the public thinks there needs to be partnership in [IDF] service and work, they need to express it.”

The draft law, which passed in March 2014 despite mass haredi street protests, aimed to right a historic imbalance in Israeli society. Mandatory military service is a rite of passage for most Israelis, one from which haredi Israelis had been exempt since the state’s founding in 1948. Yesh Atid’s chairman, Yair Lapid, touted the law as a realistic compromise that would “equalize the burden” in Israeli society.

But the three-year delay in its implementation — its toughest provisions were not due to go into effect until 2017 — made many Israelis skeptical that the law would ever have a real effect. Haredim argued that the law threatened to antagonize moderates who might have joined the IDF voluntarily. The year the law was passed, haredi enlistment increased only 11 percent — a substantial decline from the 28 percent increase from the previous year.

“United Torah Judaism says, ‘We’re ready to take part in equalizing the burden, but in a fair way and not in a populist way,'” said Shmuel Drilman, CEO of WeBetter, a new media company focused on haredi advocacy. “It’s a process, and United Torah Judaism is committed to it, as opposed to Lapid, who just wants to fight.”

When he called elections last year, Netanyahu said he wanted to partner with the haredi parties, which have long protested Yesh Atid’s reforms. Now religious pluralism activists who welcomed the reforms hope to forestall their repeals through grassroots mobilization, lobbying and legal action. Hiddush CEO Uri Regev hopes that Israel’s Supreme Court will rule a renewed haredi draft exemption illegal, as it did in 2012.

“There will be multifaceted litigation launched on a variety of issues,” Regev said. “The coalition agreements are violating core principles of Israeli constitutional law and any notion of equality.”

But Yizhar Hess, CEO of Israel’s Conservative movement, said the reforms hardly affected non-Orthodox Jews, so neither will their repeal. The conversion reform only expanded Orthodox conversion, keeping Conservative and Reform ceremonies unrecognized. Yesh Atid, Hess said, should have focused on civil unions rather than the draft.

“They should have been insisting on a reform in marriage,” Hess said. “If there were civil unions, it would have touched the lives of so many Israelis that no government would have been able to change it. Instead they dealt with things that were marginal.”

Shelach said that Yesh Atid hopes to mobilize the Israeli public to oppose the coalition agreements, but secular Israelis have yet to fill the streets in protest. To pressure the Israeli government, Regev and Hess are instead looking across the ocean. They hope the coalition agreements will convince American Jewish leaders, who began to organize a campaign in 2013 for Israeli marriage reform, to increase their activism.

Hiddush plans to “partner with Jewish Diaspora leadership and American leadership in pointing to the fact that these issues are not just an Israeli concern,” Regev said. “They are a matter of global concern because they will determine the face of Israel in the next chapter.”