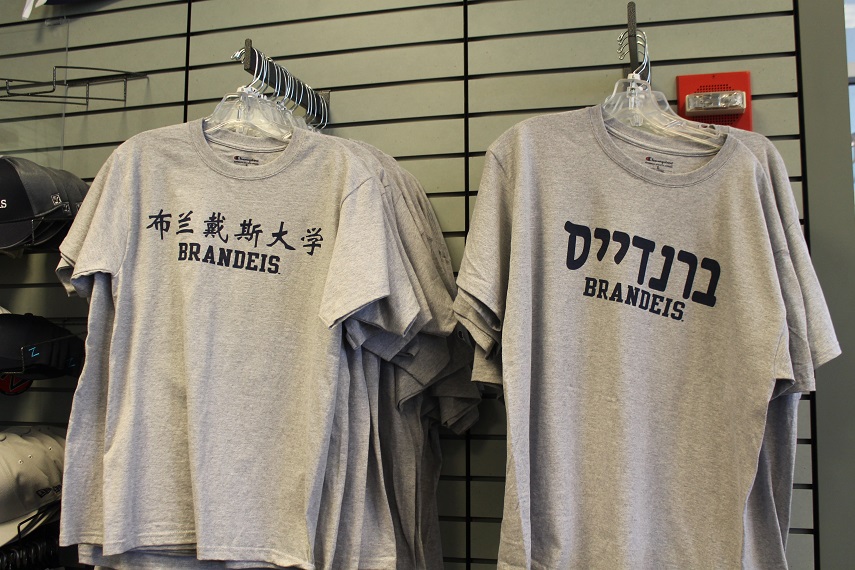 Nearly 10 percent of the freshman class at Brandeis is from mainland China. (Uriel Heilman)
Advertisement 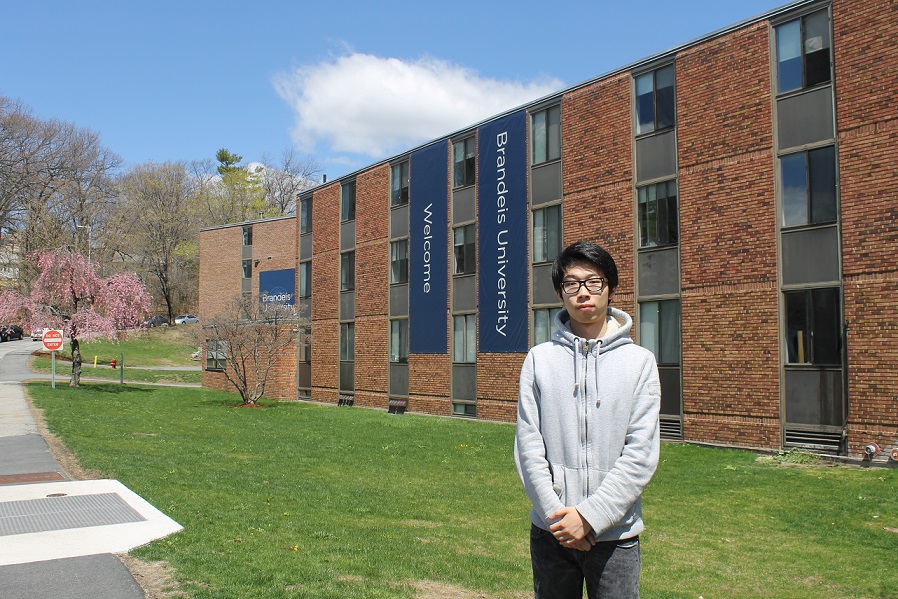 Shanghai native Tianwu Wang is one of hundreds of Chinese students at Brandeis. (Uriel Heilman)

WALTHAM, Mass. (JTA) – When Jeff Wang was applying to U.S. colleges more than two years ago from his home near Shanghai, Brandeis University was a top choice.

Like many Chinese students now at Brandeis, he had discovered the university on Chinese Internet forums that touted the school’s academic rankings and its high faculty-to-student ratio.

Wang noted one other element that appealed to him: the Jewish character of Brandeis.

“It’s run by Jewish, and Jews are smarter — there were lots of people talking about that in the forums,” said Wang, now a Brandeis sophomore and a double major in economics and fine arts. “A lot of Jews are in very high positions in corporations, so once we get to Brandeis we can have connections to those corporations through alumni relationships.”

Wang is among the fast-growing number of students from mainland China enrolled at the Jewish-sponsored, nonsectarian university outside of Boston.

Founded in 1948 as a top-tier alternative for Jews who faced quota restrictions at the nation’s Ivy League universities, Brandeis has undergone a profound demographic shift in recent years. Last year, about a quarter of incoming freshman were international — with the largest number of them from China (about 10 percent of all freshmen). After China, the top countries of origin for foreign students at Brandeis are Korea, India, Canada and Israel, in that order.

Jews are now thought to make up a minority of Brandeis’ 3,700 undergraduates — 40-45 percent according to many faculty and student estimates. That figure was said to be upwards of 60 percent just two decades ago. University officials do not have precise numbers because Brandeis does not ask students about religious background.

Brandeis is not alone in seeing an influx of students from China. During the 2013-14 academic year, there were 274,439 Chinese students at American universities, including about 110,000 undergraduates. But questions about the changing makeup of the Brandeis student body — and perhaps its leadership — are particularly resonant here given the school’s history as a Jewish institution.

The university is in the midst of searching for a successor to Frederick Lawrence, who has served as president for the past five years. When Brandeis provost Lisa Lynch steps in as acting president in July, she will be the first non-Jew ever to occupy the university’s top job. Lynch has said she does not want the permanent post.

RELATED: Brandeis president will be paid after stepping down

The debate over whether being Jewish is a requirement for the presidency has “never [been] more fierce than it is today,” said Jacob Cohen, a longtime American studies professor at Brandeis who is working on a book titled “Innermost Part: Brandeis University and the Jewish Question.” “This question, whither Brandeis, is now up for definition and debate as we contemplate a new president, trying to figure out where we are and who we are.”

The current high number of international students — the figure has risen 30 percent over the past five years and now comprises 18 percent of undergraduates — is something of a fluke that is in the process of being corrected, said Andrew Flagel, the senior vice president for students and enrollment.

“There was an unusual pattern in the last two years of students accepting our offers,” Flagel said. “The precipitous increase of international acceptance has caused us to dramatically decrease the number of offers we’ve put out for international students this year.”

He noted that “a plurality of our students are Jewish,” and the number of Jews “appears to be well over 50 percent of our U.S. students.”

Percentages notwithstanding, Jewish life is thriving at the university.

Racheli Berkovitz, a senior from Newton, Massachusetts, said that when her father attended Brandeis a generation ago, the school was about 75 percent Jewish but had no daily minyan, or Jewish prayer service. Now there are three daily services, a range of denominational choices on Shabbat, and Jewish cultural offerings from theater troupes and a cappella groups to a Yiddish club.

“I’m very comfortable Jewishly here,” Berkovitz said. “We have a very vibrant community and we’ll continue to have it, despite the percentages.”

There’s also a growing array of offerings for and by Asian students. In addition to foreign students from China and Korea, Brandeis has more than 475 Asian-American undergrads.

In one awareness-raising exercise, the Brandeis Asian American Student Association recently decorated a prominent place on campus with fliers highlighting the stereotypes that Asian students encounter at the college. 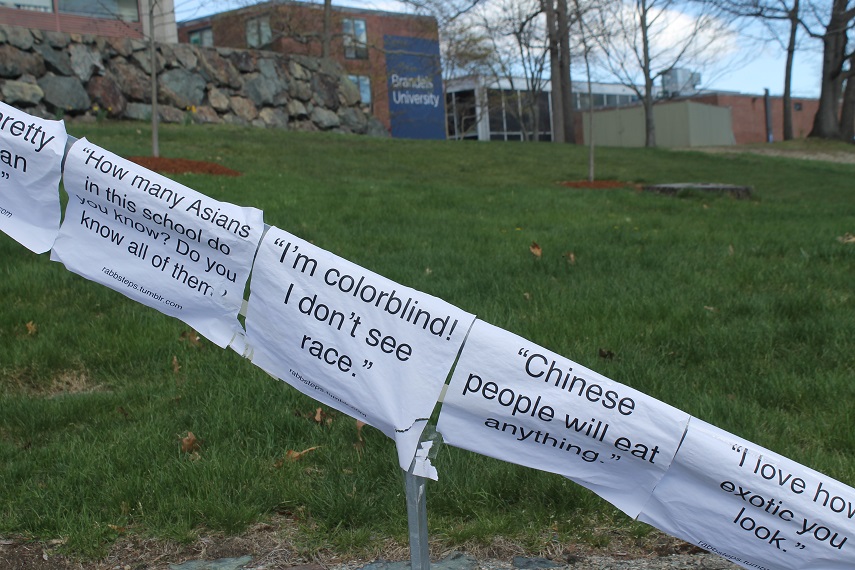 A project of the Brandeis Asian American Student Association aims to raise awareness about stereotyping at Brandeis. (Uriel Heilman)

“Look, it’s made in China, like you,” the fliers read. “Me love you long time.” “How do you tell each other apart?” “Are there any fat Asians?” “I totally have an Asian fetish.”

Many Chinese students complain about not understanding American humor and cultural references, and being misunderstood by Americans. They also lament the dining hall offerings at Brandeis — in a nod to the university’s Jewish character, they pointedly exclude pork or shellfish, both staples of the Chinese diet.

Shanghai native Tianwu Wang, a sophomore and physics major, said students from China tend to stick together, but the dearth of interaction with American students doesn’t bother him.

For Tianwu, the appeal of Brandeis was its size.

“The small school and very cutting-edge study and research is a very good thing here,” he said. “The physics department is small, which I like. There’s a lot of interaction with the professors.”

For universities, the allure of Chinese students is clear: International students are not eligible for federal loans and are restricted from most types of financial aid, so Chinese students pay full freight. And the Chinese who come to school in America tend to have strong academic qualifications, ambition — and means.

On the downside, Cohen noted, “many of the foreign students, and in particular the new group of mainland Chinese students, have a way to go with regard to English-language skills and writing.”

Ariel Kagedan, a Jewish junior at Brandeis, said his training to become a resident adviser included a session on international students, but it didn’t prepare him for two surprising episodes.

One was when a newcomer from India asked where he could find drinking water on campus. The other was when a Chinese student asked for help choosing an American name; many Chinese students adopt American nicknames instead of their given Chinese names. This student chose Kyle.

Huilin Gang, a master’s student in computer science from Xinjiang, China, said she didn’t know anything about Jews before she came to Brandeis. Then, last month, a friend invited her to join his Jewish girlfriend’s Passover seder.

Huilin said she was fascinated by the dress, the foods and the rituals.

“It was my first time to know something about Passover, about their customs, about their traditions,” she said. “It was very interesting.”