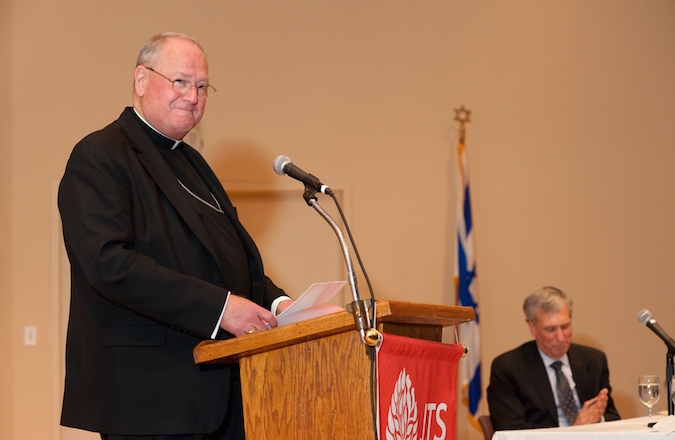 NEW YORK (JTA) — A half-century ago this year, the Catholic Church issued a landmark document that decried anti-Semitism and asserted that Jews could not be blamed for killing Jesus. The effect: Long-fraught relations between Catholics and Jews were dramatically improved.

To mark 50 years since the detente, New York’s Cardinal Timothy Dolan came to the Jewish Theological Seminary on Wednesday to discuss how relations between the two faiths have evolved in recent decades. Specifically, Dolan credited Pope John Paul II, who led the Catholic Church between 1978 and 2005, with deepening the bond between Catholics and Jews.

The conciliatory 1965 document known as Nostra Aetate — Latin for “in our time” — “inspired John Paul II not just to tolerate Jews, not just to have theological discussions with them … not just to meet with them … but to invite them into a providential, emergent partnership,” Dolan said at the event, which was organized by the Milstein Center for Interreligious Dialogue at JTS.

Dolan, who leads the sprawling Archdiocese of New York, said that interfaith relations remain strong and that Pope Francis during his planned September visit to New York would make time for a “substantial interreligious meeting.”

His lecture, attended by some 300 people at the Conservative movement’s flagship seminary in Upper Manhattan, was followed by a conversation between the Roman Catholic leader and the JTS chancellor, Arnold Eisen. Moderated by The New York Times religion reporter Laurie Goodstein, the discussion veered into recent events, including the deadly shootings in January at Paris’ satirical newspaper Charlie Hebdo and, just this week, at a Texas event showcasing illustrations of the Prophet Muhammad.

Dolan said the violence has forced people to wrestle with the limits of free speech.

“Rights and responsibility must go together,” he said. “Right now we have an exaggerated sense of rights that are not balanced with an appropriate sense of responsibility.”

“We want to draw the limits of free speech as broadly as we can, but we don’t want to allow hate speech,” Eisen said. “Are we doing these demonstrations of free speech, in this case the cartoon festival [in Texas], in order to demonstrate free speech? Or are we doing it especially to denigrate another faith?”

Dolan, who was named Archbishop of New York in 2009, stressed that American Jews and Catholics should serve as a model for improving interfaith relations around the globe.

“This friendship, this mutual appreciation and understanding, is something that you and I need to remind the world of,” Dolan told the crowd. “We’ve got something to give to the world.”