Op-Ed: My message to the man who attacked me at the Kotel 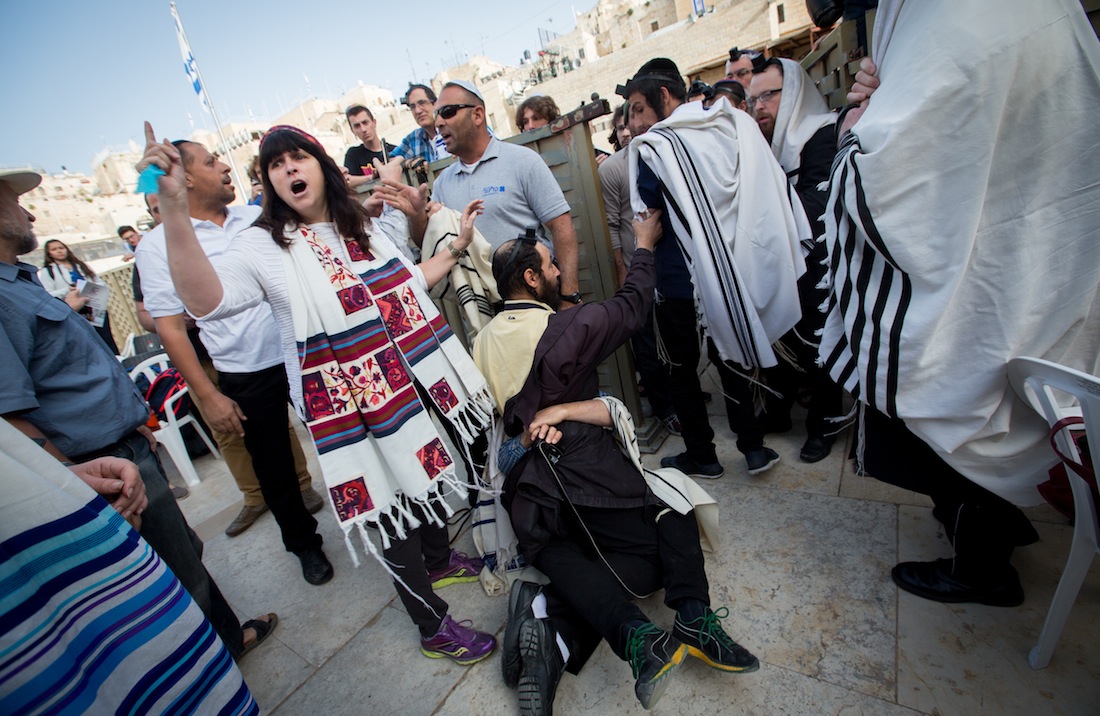 An orthodox man scuffles with a supporter of Women of the Wall, a group advocating for women's prayer at the Western Wall, April 20, 2015. (Miriam Alster/Flash90)
Advertisement

JERUSALEM (JTA) – On a sunny morning last month, I was swept into the women’s section of the Western Wall in Jerusalem in a flurry of aggression directed at the Women of the Wall, the Israeli group fighting for women’s prayer at Jerusalem’s holiest site.

One of the group’s male supporters, Charlie Kalech, was strangled and thrown to the ground. I was stomped on in the stomach by an enraged man.

Nearly three weeks after this brutal attack, I’ve finally woken up from the shock and horror of fellow Jews inflicting bodily harm on me, on Charlie and on other men. It’s time to speak. 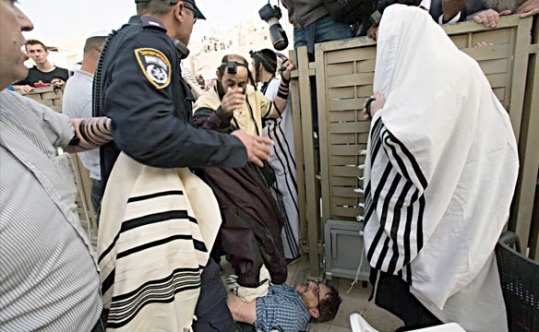 Alden Solovy, on the ground, being stomped on by another worshipper at the Western Wall. (Miriam Alster)

Here’s what happened: After we men finished reading the Torah in our simultaneous service, a woman took the Torah through a gate in the mechitzah, the fence separating the genders. We broke out in spontaneous song and dance. It was pure joy to know that Torah – a gift given by God to all of us – would be chanted by women at the Kotel.

The morning continued peacefully for perhaps another 15 minutes or so. For an instant it seemed as though the violence that had previously marred women’s prayer at the Kotel might just be avoided.

Then a handful of men showed up. They manhandled us, attempting to get to the gate in the mechitzah, their intentions unclear but their demeanor aggressive.

Charlie and I were near the gate. We tried to hold our ground against larger men, but the gate was somehow opened. Charlie called out for the police and was assaulted.

I saw an ultra-Orthodox man trying to charge through. He appeared violent. In that moment there were no good choices. Let him run through and perhaps hurt someone? Use myself, my body, as a barricade?

I wrapped my arms around him and used my body as deadweight to bring him to the ground.

On the ground, my focus shifted to protecting the tefillin from hitting the stone – an ironic mistake regarding my own safety. Taking the headpiece in my hand, I called out for someone to take it from me, breaking my grip on the man, who jumped up and stomped on my stomach.

To the man who stomped on me: I’m disgusted by your behavior. You are the face of sinat chinam, baseless hatred by Jew against Jew. I am still injured and in pain. Yet this is what I said in synagogue last Shabbat: “Do not hate the man who stomped on me. Rail against his misogyny, object to what he was taught, condemn his behavior, seek justice against his violence, if that’s even possible, and seek change in Israeli democracy. But don’t use what happened to me to justify hate or prejudice of anyone.”

To my daughters: I’m sorry for the fear this caused. I’ll continue to participate in the struggle. I promise to do it as a supporter, a poet, a writer – but not as a 155-pound untrained middle linebacker. The cause of Women of the Wall is just. The call to religious freedom is holy. I swear by peaceful resistance.

To those who would stomp on Jewish practices not their own: Tyranny never survives, but there are casualties along the way. Stop preaching hate. Stop trying to control Jewish practice with oppression and violence. This will not earn a place in heaven. It harms us as a people.

Alden Solovy: The real heroes are the women who have fought this fight year in and year out.

To the Israeli government: It’s time to run Jewish religious sites equitably and responsibly. We all should be able to pray at the Kotel according to our diverse and beautiful traditions. The Supreme Court ruling that women can read Torah at the Kotel should be enforced.

To those who’ve given up on the Kotel: Have you forgotten how you felt on that day in 1967 when the Kotel was won? Have you forgotten the day you first touched those majestic stones? Have you forgotten that we pray daily for a renewed and rebuilt Zion? There should be thousands of us at the Kotel demanding that the governing authorities at the Western Wall uphold the law of the land. The Kotel should not be a de facto haredi Orthodox synagogue. None of our holy sites should be run by any one branch of our great tradition.

Real men stand with women who fight injustice, with women willing to face violence and arrest to claim the rights denied them. When called upon, real men put themselves on the front lines. But the heroes are the women who have fought this fight year in and year out.

The fact that I helped is a privilege. I believe that this act earned us merit in heaven. If not, so be it. It should. Either way, that’s between me and God.

On the first of the Hebrew month of Iyyar, in the year 5775, we stood with our sisters for the sake of Torah. For a moment, for a heartbeat, heaven rejoiced.

(Alden Solovy is a Jewish poet, liturgist and teacher. He is the author most recently of “Haggadah Companion: Meditations and Readings.” Read his work at www.ToBendLight.com.)