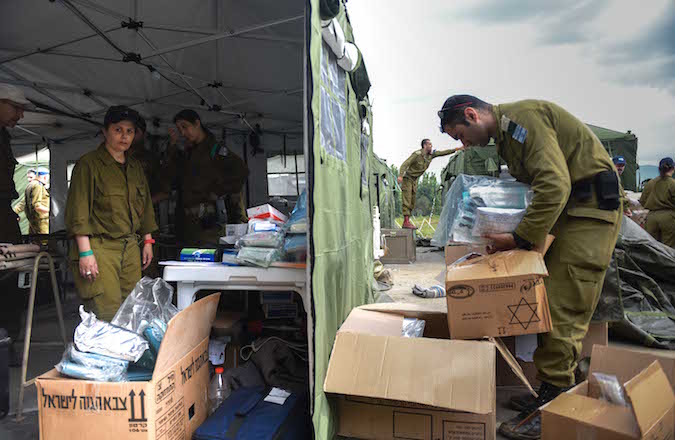 Israeli soldiers establish a field hospital together with the Nepalese army on April 29 in Nepal. (IDF Spokesperson/Flash90)
Advertisement

An earthquake with a magnitude of 7.3 struck Nepal on Tuesday morning less than three weeks after a 7.8 magnitude quake struck the same area, killing more than 8,000 people and injuring upwards of 16,000. At least 42 people have been reported killed and several buildings destroyed in Tuesday’s earthquake in the hours after it struck.

The area had faced numerous aftershocks and smaller earthquakes since the April 25 temblor centered near Kathmandum, the capital. Many families had moved back to their homes, however.

Rabbi Chezky Lifshitz, co-director of the Chabad of Nepal with his wife, Chani, said soon after Tuesday’s quake that 133 Israelis have again taken shelter at the Chabad center, according to the Chabad.org website.

“Although everyone we know appears to be safe, we are sad to report that there are many more casualties in Nepal again today,” Lifshitze said. “There is so much more work that now needs to be done.”

“Members of the delegation, we are proud of you!” Netanyahu exclaimed. “You rescued people from the ruins, treated 1,600 injured and sick people, and brought new life into the world, at least eight births. You showed the true face of the State of Israel – a state that loves life and saves life.”

“You brought much honor and much pride to the State of Israel. I am certain and I know that you are already prepared for the next mission wherever you are needed.”