In Arab-Israeli city, a women’s party is challenging the status quo 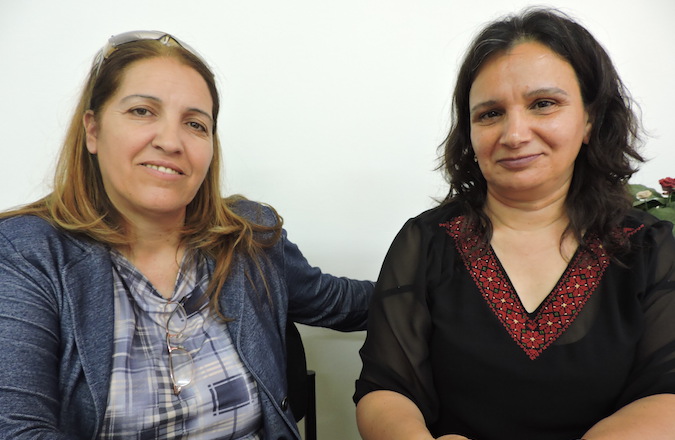 Samira Haj Yahia (left) and Neheia Habib are the founders of Nahnu, a women's activist group that plans to run in local elections in the Arab-Israeli city of Taibe this fall. (Ben Sales/JTA)
Advertisement

TAIBEH, Israel (JTA) — To get to her assigned kindergarten, Biyan Azam, then 5, would have had to walk alone through a bustling commercial district and cross a busy intersection. This Arab-Israeli city does not provide school buses and would not transfer Biyan to a school nearer to her home here.

Nahnu (“we” in Arabic), a women’s civic activism group, wrote letters, visited City Hall and ultimately succeeded in getting Biyan — who had been staying home rather than risking the walk — moved to the kindergarten near her house.

The campaign was one of many Nahnu has led against City Hall. What began as a group of a dozen women gathering for coffee to commiserate about their hometown became “an address in Taibeh for public complaints,” said Nahnu co-founder Samira Haj Yahia.

“People aren’t aware of where to go,” Haj Yahia, 51, said of the city’s 40,000 residents. “If there’s an immediate problem, the municipality doesn’t handle it. For every small problem, you need to go to the mayor. That compels us to help.”

This fall, Nahnu hopes to enter the local government it has so heartily battled. It is running as a political party, vying for city council seats and the mayoralty in this fall’s municipal elections.

In heavily Arab cities in Israel, women have traditionally been urged to stay out of the public sphere. Politics have been seen as men’s realm. But that’s changing, albeit slowly, as more Arab-Israeli women are running for public office.

To many Arab-Israeli women, politics “looks like something scary that will take a lot of time, and they’ll pay a high price socially, familially,” said Maisam Jaljuli, who runs an Arab women’s political empowerment seminar for the Abraham Fund, which promotes Jewish-Arab coexistence. “We thought that if women would understand what politics is and see what political life is like, it’ll show them that this demon is not so scary.”

Only two Arab women — The Joint List’s Hanin Zoabi and Aida Touma-Sliman — serve in the 120-seat Knesset among 29 female lawmakers. Of the some 570 Arab-Israelis elected to local governments, only 12 are women — an increase from five before 2013, according to Jaljuli. Her seminar, which has included some Nahnu members, hopes to grow that number by teaching Arab-Israeli women such skills as public speaking, giving press interviews and writing party platforms. 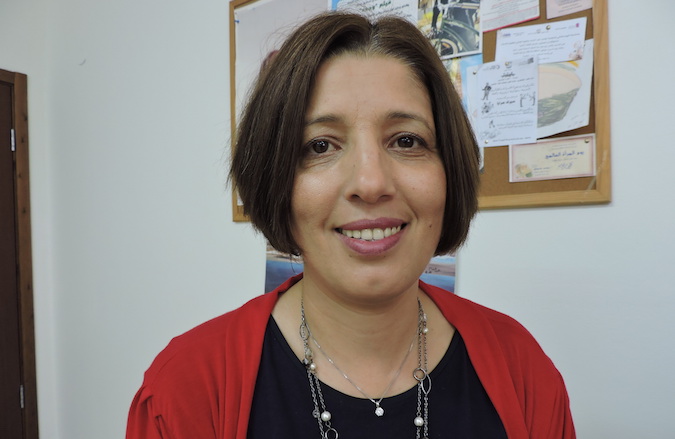 Maisam Jaljuli runs a political empowerment seminar for Arab-Israeli women with the hopes of increasing the number of Arab women in elected office. (Ben Sales)

Recent years have seen more Arab-Israeli women graduating from college and going to work. In 2011, 24 percent of Arab women participated in Israel’s labor force, double the 1990 figure, according to the Taub Center for Social Policy. And in 2008, Taub found that 13 percent of Arab women aged 25 to 44 held college degrees, compared to less than 3 percent of their counterparts aged 45 to 64.

“Women do not see their problems addressed in terms of day care, in terms of work,” said Suheir Daoud, a politics professor at Coastal Carolina University in South Carolina who is originally from northern Israel. “Women are becoming more confident in their abilities. They’re more educated.”

In Taibeh, which is situated in north-central Israel not far from the West Bank border, politics has long been controlled by what locals call “the families” — two large, male-dominated clans that formed city council slates and ran against each other. But in 2007, Israel’s Interior Ministry ousted the last democratically elected Taibeh mayor and dissolved the city council after the city racked up a $233 million debt and ran a $36 million budget deficit, according to Israeli reports.

Since then, a committee appointed by Israel’s Interior Ministry has run the city. Taibeh’s fiscal affairs are in better shape, but locals still complain about a dearth of construction permits, problems with basic utilities and a shortage of jobs. They also chafe at an unelected government led by a Jewish-Israeli politician from the right-wing Likud Party.

“There were improvements, but we reverted on other things,” said Omar Baransi, 58, a widowed father of three who runs a pizzeria. “We have nowhere to build. I want to build. I don’t have a permit, but I have the land.”

In the past two years, Nahnu has successfully pressured the city to reopen a children’s health clinic and unsuccessfully lobbied against a 7.5 percent local property tax hike. It’s also going to bat for fired city workers.

Haj Yahia, a journalist for the Arab-Israeli A-Shams radio station, has gotten to know the city’s woes through her work. Her co-founder, Dr. Neheia Habib, 49, is a physician and the daughter of a former mayor who taught her politics at home.

Nahnu plans to focus on combating violence, both at home and in the street. In the past, gang fights have been a blight on the city. The movement will also push to open a special education school and expand extracurricular activities for kids.

“From my work, I was exposed to a lot of things I could help and not just publish,” Haj Yahia said. “We won’t be silent now. We came to make a change, to make a social revolution, to make the city healthy.”

Haj Yahia talks about winning the mayoralty, but knows she’ll face pushback given the city’s conservative culture — and she’s not alone. In the nearby Arab-Israeli village of Jaljulia, high-school civics teacher Inssaf Shawahna, 49, hopes to run in the 2017 local elections. But Shawahna, another graduate of the Abraham Fund’s political seminar, says family and friends have deterred her from campaigning due to cultural and religious taboos that discourage women from taking on leadership roles.

“I get a lot of negative feedback, even from those close to me, who say you won’t succeed, it won’t work out, you’ll just embarrass us, your [public] picture is forbidden,” she said, referring to some Muslim legal opinions that forbid displaying women’s photos.

“Someone said to me, ‘Why do you need this headache?’” Haj Yahia recalled. “I said, ‘If you can solve the problems, run instead of me.'”