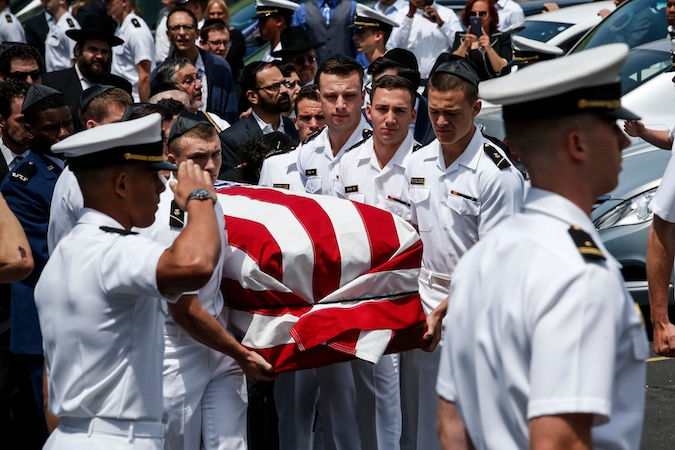 Midshipmen from the U.S Naval Academy carry Midshipman Justin Zemser to a waiting car after his funeral on May 15, 2015 in Hewlett, New York. (Kena Betancur/Getty Images)
Advertisement

NEW YORK (JTA) — A Jewish 20-year-old sophomore at the U.S. Naval Academy who was killed in Tuesday’s Amtrak train derailment in Philadelphia was given full military honors at his funeral, which was attended by 160 Navy midshipmen.

The funeral for Justin Zemser of Rockaway, Queens, who aspired to be a Navy SEAL, was held at the Boulevard-Riverside-Hewlett chapel on Long Island Friday morning. Zemser’s commanding officer Capt. Brady Soublet called the sophomore a “phenomenal young man” at the ceremony, which featured a bugler and a naval burial detail, the Baltimore Sun reported.

Zemser, who was one of eight passengers killed aboard a northbound Amtrak train that derailed and injured dozens of passengers, was vice president of the naval academy’s Jewish Midshipmen Club and a wide receiver on the school’s sprint football team.

He was a popular student who was lauded as mature and intelligent by friends, family and naval academy colleagues, NBC New York reported, and was en route to his home in Queens on Tuesday night.

“He was the captain. He was the kid. He was basically like the face of Rockaway,” said Frank Kalnberg, Zemser’s friend and football teammate at Beach Channel High School in Rockaway Park, Queens for three years.

The funeral for Jewish 39-year-old Rachel Jacobs, a start-up CEO who was also killed in the crash, was set for Monday in her hometown of Southfield, Michigan, a Detroit suburb. A memorial service for Jacobs, who lived in Manhattan with her husband and young son, will be held Saturday at Hebrew Union College-Jewish Institute of Religion in Manhattan.