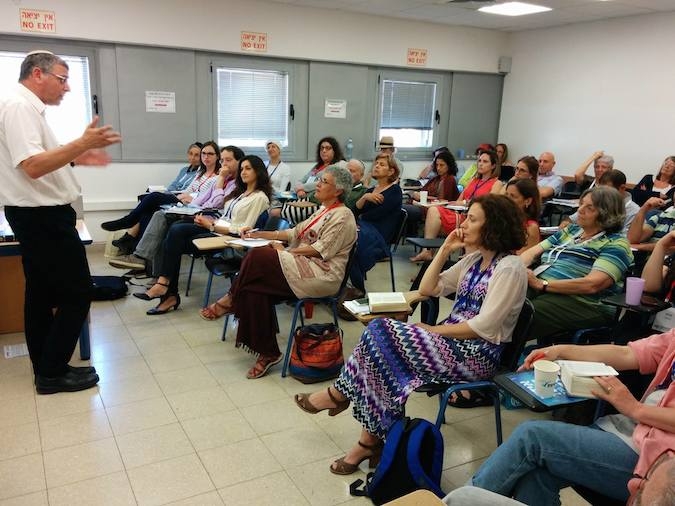 The debate over Jewish law’s role in Israel’s government has raged for 70 years. Should the state, above all, be Jewish, or should it put its democracy first?

Addressing a crowded room Thursday, Yotam Yizraeli argued that Jewish tradition suggested a third option: no government at all. When the Torah said to obey God’s law, Yizraeli claimed, it meant to denigrate kings, who would never measure up to divine rule.

“Theocracy means that I don’t accept anything,” Yizraeli said. “Theocracy is all around us. It continues with Israeli techies. Talmudic discussion has an anarchist quality to it.”

Yizraeli was teaching a class called “Judaism and Anarchy” at the inaugural Limmud TLV, a two-day pluralistic conference of Jewish learning that took place last week at a college in Jaffa. The 400 participants at the conference— many of them in their 20s and 30s — attended more than 100 sessions ranging from traditional Talmud study to yoga to the dissection of a popular satirical TV show. While most sessions were in Hebrew, several were in English, catering to the visible minority of English-speaking immigrants in attendance.

But many of the sessions used Jewish texts to address past and present Israeli political fissures. Sessions confronted topics like the source of Israel’s festering secular-religious divide, discrimination against African migrants in south Tel Aviv, political campaigns in the Bible and Israel’s controversial nation-state bill, which would enshrine into law Israel’s status as a Jewish state.

“There’s no doubt there’s an ability to have a deeper discussion because we live these issues,” said Limmud TLV Chairman Tal Grunspan. “There’s no doubt an Israeli will understand the nuances, because it’s meant for an Israeli audience. That’s part of the beauty of doing a Limmud in Tel Aviv.”

In hosting its first Limmud, Tel Aviv joins dozens of cities around the world that have held the Jewish learning conference — from London to Montevideo, Uruguay to Johannesburg, South Africa. Limmud TLV’s team hopes to make the conference an annual event.

Eight other communities in Israel have hosted a Limmud conference, from towns in the Arava, near Israel’s southern tip, to Limmud Galil up north. Cities with large religious populations, like Jerusalem and the central Modiin, have also held Limmuds, and Israel has hosted a Limmud for immigrants from the former Soviet Union.

The conference’s arrival in Tel Aviv is one more sign that Israel’s secular mecca is experiencing a spiritual revival, driven in part by young religious Israelis who have come to the country’s economic capital for jobs, as well as immigrants with more traditional lifestyles. And though Tel Aviv is known as a left-wing stronghold, perspectives at Limmud spanned the political map.

The class on the nation-state bill was taught by one of the bill’s proponents, who argued against left-wing claims that the bill would weaken Israeli democracy. A later session on the haredi Orthodox view of Zionism posited that the haredi worldview will never accept modern Jewish sovereignty — even as haredi politicians serve in Israel’s government.

“The moment we build coalitions in the Knesset that have an ingredient of people who aren’t Zionist, that dictates the agenda of the state,” said Conservative Rabbi Jeff Cymet, who taught the class. “And that worries people who care about Zionism.”