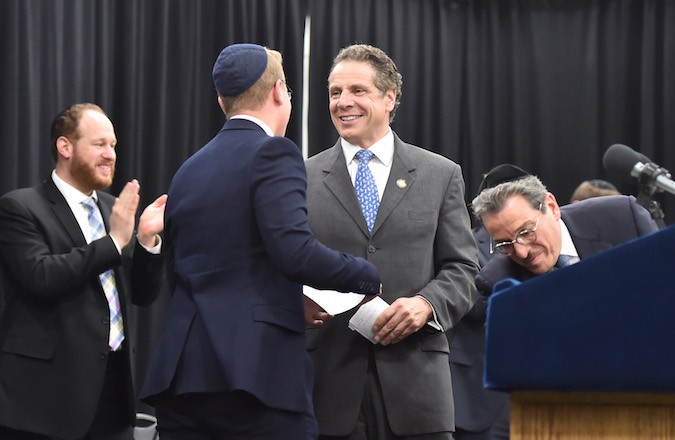 NEW YORK (JTA) – When Rhode Island adopted an education tax credit program a few years back, it resulted in a windfall for the state’s two Jewish day schools. Between them, their students received some $400,000 in scholarship money in the program’s first year.

In Florida, tax credit legislation has resulted in nearly $10 million annually for scholarships for Jewish day schools and yeshiva students.

Now New York, which has more Jewish day school and yeshiva students, some 150,000, than all other states combined, has a chance of getting an education tax credit program that could deliver millions of dollars per year to cash-strapped Jewish day school families.

Two weeks ago, New York Gov. Andrew Cuomo announced a proposal for a new $150 million education tax credit program he’d like to see passed before the State Assembly adjourns for the year on June 17. Called the Parental Choice in Education Act, it would offer tax credits of up to 75 percent for individuals or business that donate to scholarship organizations for private school students and $500 tuition tax credits for private school students from families with incomes under $60,000 annually.

The question now is whether day school and private school advocates can overcome entrenched opposition to get New York’s famed “three men in a room” – the governor, Assembly speaker and State Senate majority leader – to agree on a deal that includes the bill.

“Before the governor stuck his neck out as forcefully and as publicly as he did, I was skeptical that this year would be the year for any serious movement on this type of legislation,” said David Zwiebel, executive vice president of Agudath Israel of America, the haredi Orthodox umbrella organization that long has advocated for increasing public funding for Jewish schools. “Now we’re working with colleagues and allies to help develop a strategy to help push this to the finish line. We think the parent bodies of our schools can and should be mobilized to express support in various ways – phones, emails, maybe bringing a group to Albany.”

While some details have yet to be hashed out, here’s how the main components of the bill would work:

Individuals or businesses that donate to nonprofit scholarship organizations for students at non-public schools could receive a tax credit of up to 75 percent of their donation. The state would hand out a maximum of $50 million per year in tax credits – on donations totaling about $67 million. The private and parochial school scholarship recipients would be split roughly equally between students from families that earn less than $60,000 per year and students from families earning less than $250,000-$300,000 per year (depending on how many kids you have).

In addition to the scholarship money, non-public school families earning less than $60,000 annually could get a tax credit of up to $500 per student per year.

With three weeks to go before Albany adjourns for the year, day school advocates are planning a last-minute lobbying push for this Assembly bill.

“Our objective is to get thousands of parents contacting their legislators, doing joint missions to Albany until the session is over,” said Maury Litwack, director of state political affairs for the Orthodox Union. “We’re going to do direct mail and robo-calls to the community in order to get them active and engaged. Our community has to be aware of it, and we have to put as much pressure as possible on the legislature.”

Here are some FAQs about how the bill would work:

Most Jewish day schools are nonprofits, and therefore donations to them are tax deductible. However, while a tax deduction merely reduces your amount of taxable income, a tax credit is the equivalent of cash.

Does this mean I can donate directly to my child’s school?

No. Only donations to scholarship organizations are eligible for the tax credit, and in previous versions of this bill the scholarship organizations had to be affiliated with at least three schools to eliminate the possibility of parents directing donations to their kids’ school. However, the beneficiaries can be limited to Jewish schools, or even Jewish schools in a particular geographic area – say, the three Jewish schools on the south shore of Nassau County — allowing the donor to target his or her donation pretty specifically.

I have three kids and earn less than $260,000. How much scholarship money could I expect?

It depends on how much money the scholarship organization affiliated with your children’s school collects, and how many other children are eligible for scholarships in its affiliated schools.

How much of the $67 million in scholarship money will benefit day school students overall?

It depends on where donors direct their donations — and whether the tax credits are handed out on a first come, first served basis (rewarding those who act quickly) or whether they are distributed proportionately to all who apply during an open enrollment period. New York State has about 400,000 students in non-public schools; approximately 150,000 are in Jewish day schools and yeshivas.

What will it take to pass this bill?

Teachers’ unions and public school advocates oppose it, calling it a giveaway to private school parents, and there are more teachers in New York than private and parochial school students. But Cuomo has a strong record in muscling through his legislative priorities, and the Assembly’s new speaker, Carl Heastie, has cosponsored similar legislation in the past.

As with the U.S. government in Washington, New York has two legislative houses – the State Senate and Assembly — and both must OK passage. While the State Senate already has passed a similar bill, the Assembly has not. Typically, the governor sits down with the Assembly speaker and the Senate majority leader ahead of the end of the legislative session (June 17) to hash out a series of bills, and the Parental Choice in Education Act likely will be part of that horse-trading, known as the “Big Ugly.” If it doesn’t pass now, the Assembly does not reconvene until January 2016.

What’s the justification for sending public money to private and parochial schools?

Opponents say that government assistance to private and parochial schools comes at the expense of public schools, that the 75 percent tax credit for donors to scholarship organizations amounts to a giveaway for the rich and that families making $250,000 per year shouldn’t qualify for government-subsidized scholarship assistance. But Jeff Leb, managing director of government and external relations at UJA-Federation of New York, says day school parents deserve government support because they save public schools the cost of educating their kids, day schools provide jobs to public school teachers, and $250,000 does not make you rich if you have kids in day school. Noting the establishment of similar programs in other states, Leb added that there’s no church-state concern. “This provides a small service to help families who are struggling to make ends meet,” Leb said. “It’s the least the state can do to provide.”