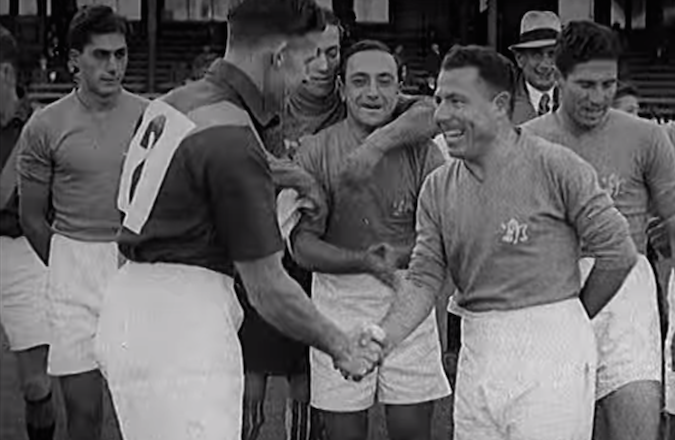 Soccer is in the headlines today, but not for positive reasons – 14 FIFA officials have been indicted on corruption charges.

This is especially interesting news to Israeli soccer fans, as FIFA is set to vote this week on whether or not to suspend Israel’s national team from international play. The Palestinian Football Association has accused Israel of breaking FIFA’s rules and introduced to the FIFA congress a motion to suspend Israel.

Of course, Jewish soccer in Israel dates back before the establishment of the state of Israel. This amazing video from 1939 from the British Pathé archive shows footage of a match between Australia and Palestine (which was then occupied by Britain). Note a detail that betrays how much has changed in the Middle East since 1939: the “Palestinian” players feature what look to be Jewish stars on their uniforms. (You may also want to check out this 1947 story from JTA’s Archive about when the Palestine Hapoel team defeated a New York all-star team thanks to Hapoel’s 18-year-old goalie Jacob Chodorov who “starred for the Palestinians.”)