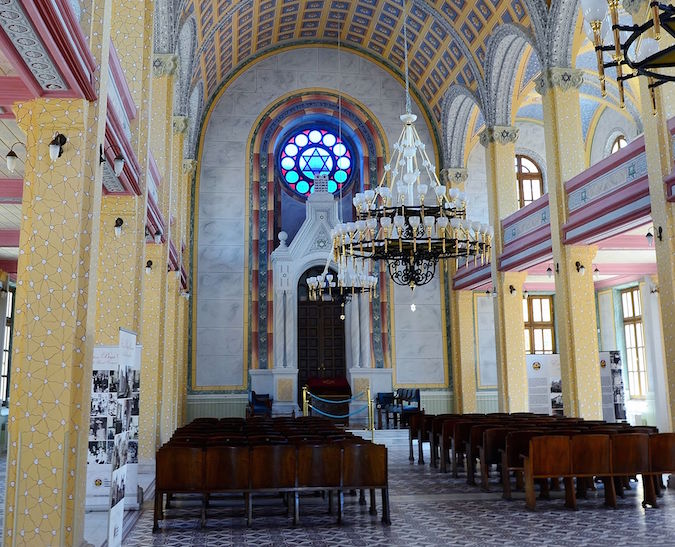 The Grand Synagogue of Edirne in Turkey was renovated this year. (Wikimedia Commons)
Advertisement

ISTANBUL (JTA) — In the backyard of the Etz Ahayim synagogue in Turkey’s largest city, congregant Yusuf Arslan hollers pleasantries as he mingles with other members of the small congregation.

He needs to shout to be heard over the deafening sound of a sudden downpour hitting the blast-proof glass ceiling that stretches over the synagogue’s spacious yard. Installed after Istanbul’s deadly 2003 synagogue bombings, the shield is meant to prevent grenades from exploding in the complex should anyone hurl them over its formidable walls and past the guard post where several armed men stand watch under a Turkish flag.

Arslan, a real estate developer, says the tight security “neither poses a real obstacle for communal life nor differs greatly from other at-risk communities — say in France or Britain.”

READ: Who are Turkey’s Jews?

Turkey’s government, he said, “protects its Jews.” His view reflects the party line of Turkey’s small Jewish community, whose estimated 15,000-20,000 members generally have been careful not to appear ungrateful to a government they believe protects them from growing radicalism in a predominantly Muslim society.

But that long tradition of self-censorship is fading as Turkish Jews grow increasingly uneasy with the hostile rhetoric emanating from the mouths of officials in Turkey’s ruling Islamist AKP party — especially President Recep Tayyip Erdogan.

“Erdogan and AKP use blatant anti-Israel rhetoric for votes, and this comes back to us as anti-Semitic hatred,” said Denis Ojalvo, a Jewish expert on international relations living in Istanbul. “Ordinary Turks are unable to make the distinction between Israeli and Jew.”

A report this year by the U.S. Commission on International Religious Freedom noted that Turkish Jews are reporting mounting harassment and are “increasingly fearful of violence” amid “rising anti-Semitism in society, in the media and in occasional derogatory comments by government officials.”

Cefi Kamhi, a former lawmaker and prominent Turkish Jew, accuses Erdogan of “pandering to populism” at the Jewish community’s expense. As a result, he said, “young Turkish Jews are now planning their future, teaching their children foreign languages, liquidating their assets.” 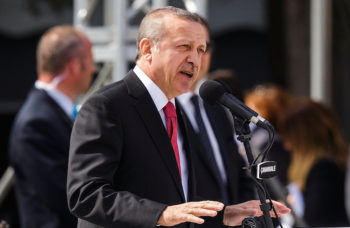 The shift is a marked change for Turkey’s Jews, who historically have maintained a low profile, steered clear of conflicts and stayed put despite Turkey’s Islamic drift. Erdogan’s rhetoric has changed that.

In 2013, Erdogan fulminated against “the interest rate lobby [that] believes it can threaten Turkey with stock market speculation” — an allusion seen by critics as referencing rich foreign Jews. In 2014, he accused protesters angered by his handling of a mining tragedy of being “spawn of Israel,” and the pro-government Yeni Akit newspaper criticized the mine owner for having a Jewish son-in-law.

Anti-Semitic rhetoric spiked last summer during Israel’s war with Hamas in Gaza – a conflict during which hundreds of Turkish protesters stormed the Israeli Embassy and the ambassador’s residence in Ankara. Erdogan accused Israel of “Hitler-like fascism” and of perpetrating a “systemic genocide every Ramadan” against Palestinians.

Meanwhile, Ankara’s mayor, Melih Gökçek, who is a member of Erdogan’s AKP, or Justice and Development Party, praised an anti-Semitic statement by a popular singer who wrote on Twitter: “God bless Hitler. If God allows, it will again be Muslims who will bring the end of those Jews.”

READ: Turkish newspaper tries to save a dying Jewish language

In January, Gökçek accused Israel’s Mossad intelligence agency of orchestrating the Charlie Hebdo and kosher supermarket attacks in Paris that left 16 dead and were perpetrated by Muslim extremists. 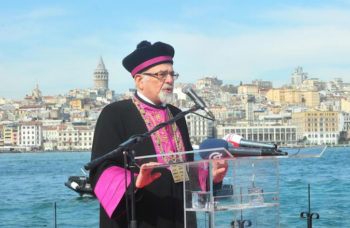 Many say the turning point came after the May 2010 Mavi Marmara incident, when nine Turkish pro-Palestinian activists were killed after Israeli troops stormed the Gaza-bound ship with which they were attempting to break Israel’s Gaza blockade. The incident aboard the vessel, the Mavi Marmara, poisoned Turkish-Israel relations and unleashed a flood of anti-Semitic statements from officialdom that shocked many Turkish Jews.

Anti-Semitic and anti-Israel rhetoric for decades was “firmly present in the lexicon of Erdogan’s Islamic circles, but became more pronounced after the Mavi Mamara,” said Rifat Bali, a historian and author of several books on anti-Semitism in Turkey.

Turkey’s government also has made some pro-Jewish moves, such as helping to fund the reopening of the Edirne Great Synagogue in March and organizing Holocaust commemorations in Istanbul annually since 2011 and in Ankara this year. In February, the City of Istanbul commemorated for the first time the 781 Jewish refugees who in 1942 drowned off of Turkey’s shores after their ship, the MV Struma, was torpedoed on its way to pre-state Israel. 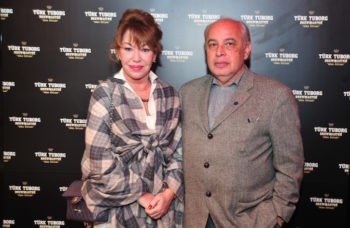 Yasemin and Cefi Kamhi in Istanbul on March 23, 2013. (Courtesy of Türk Tuborg Brewmaster)

But Kamhi, the Jewish former lawmaker, dismisses these actions as “symbolism meant to deflect foreign criticism over the creeping state anti-Semitism.” He said, “They sound good on CNN and have absolutely no coverage in Turkey.”

A predominantly Sephardic community, Turkish Jews also have yet to avail themselves of a new program that grants Portuguese citizenship to descendants of Portugal’s exiled Sephardim. An ad campaign by the Jewish community in Porto, Portugal, led to fewer than 100 Turkish applications, and even fewer Turks applied in the Portuguese capital of Lisbon.

“Turkish Jews stay because they don’t fit anywhere else,” said Sami Aker, a journalist at the Salom Jewish paper who returned to Turkey twice after emigrating – once to Israel and once to the United States. “This is not a post-Holocaust community where emigration is part of the lexicon,” Aker said. “Jews have lived here uninterrupted for over 2,000 years.”

If they’re not leaving yet, however, Turkish Jews seem to be readying for the day the need to do so arrives.

“Our bags are not packed,” said Alin Bardavit Arslan, the wife of Yusuf Arslan, the real-estate developer. “But these days the suitcases are waiting under the bed to be filled — at a moment’s notice.”