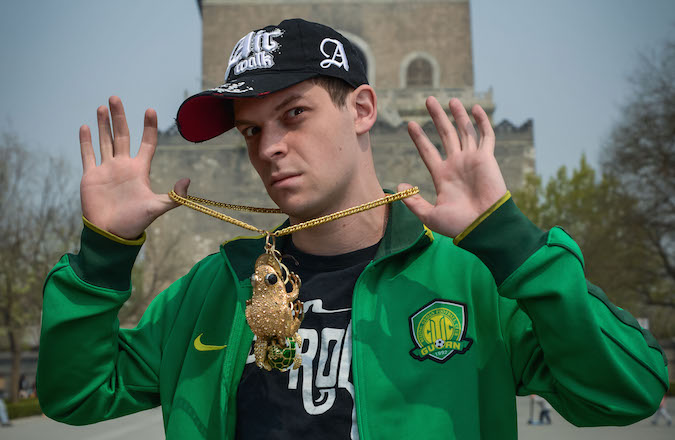 (JTA) – How do you tell a joke in China about Jews when the only things most Chinese think they know about the Chosen People is that they’re smart and good with money?

That was Jesse Appell’s quandary when he moved to China three years ago from Massachusetts with plans to become a comedian — and, like many stand-ups, to mine his own upbringing for material.

“All the bad stereotypes about Jews in the West are considered good in China,” Appell told JTA. “Chinese say: ‘The Jews control the media and the banks – amazing!’ When people find out I’m Jewish, they say that’s why I speak Chinese so well, because Jews are super-smart. I’m like, that’s not how it works.”

Appell, 24, is one of only a handful of stand-up comedians in China, a country of 1.35 billion people that until very recently didn’t have much of a stand-up circuit. The country’s first stand-up show premiered on Dragon TV in 2012, the same year that Appell graduated from Brandeis University and moved to Beijing.

He came on a Fulbright scholarship to train in the traditional Chinese comedic art known as Xiang Sheng, in which two performers engage in witty banter in semi-scripted routines — a bit like the Abbott and Costello classic “Who’s On First.”

But Appell, who performs in Mandarin Chinese, soon found a following with humorous videos and stand-up routines. Much of Appell’s humor centers on his position as an insider/outsider, a foreigner in China who gets Chinese culture — except when he doesn’t. A Gagnam-style parody video Appell made about being a “Laowai,” Chinese slang for foreigner, has garnered over 2 million views on Chinese websites.

By combining some traditional Xiang Sheng routines with TV appearances, stand-up performances, touring on the college circuit and teaching a high school improv class, Appell has been able to cobble together a living as a comedian in China – not exactly a standard career path for an American Jewish boy.

There are some limitations to being a stand-up comedian in China. For one thing, the Chinese term for stand-up is the same as the one for talk show, so many audience members coming to open-mic nights at their college or local bar have no idea whether to expect a Louis C.K. or an Ellen DeGeneres.

You can’t really poke fun at the government, which intentionally leaves the boundary of acceptability vague to get artists to censor themselves. The Chinese aren’t great at self-deprecation. Add to that the lack of alcohol and Chinese inhibitions against laughing too loudly and it can make for a tough crowd. 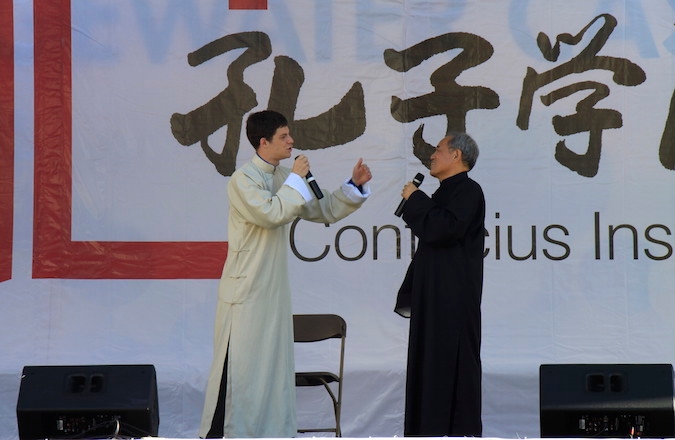 “Until I got to China, I never realized how big of an effect there is going into a set where the audience is a little liquored up,” Appell told JTA in an interview while on a visit to the United States for shows in Atlanta and Tennessee. “The Chinese tend to come in, sit down in neat rows, don’t talk and wait for the show to start. But people still have a good time — if we can make them laugh.”

Appell sometimes serves as an opening act for Joe Wong, one of China’s biggest stand-up comedians and the subject of a May New York Times Magazine profile. Appell also recently launched a new web series about living in China. He says he has performed in more than 20 Chinese provinces, and last fall he did a 13-city tour in North America.

Funny business came early for Appell. He and his brother used to do bar mitzvahs, with his brother handling the music and Appell serving as the emcee and funnyman. As a teen he was picked for Newton North High School’s elite improv troupe. He was so good that one of his teachers let him submit a rap video on Otto Von Bismarck, the 19th-century German leader, in place of a term paper.

“My name is OVB, yeah, you know me / I’m the Iron Chancellor of Germany,” Appell raps. “Shoulda seen us kickin’ ass up in Denmark / the only better warrior is Mr. Stark. / We got into this thang up in Holstein / but Prussia comes out lookin’ super clean.”

He continued doing comedy in college, but also began studying Chinese intensively (about 10 percent of all Brandeis freshmen come from China). Appell spent six months of his junior year studying in China, where he discovered traditional Xiang Sheng comedy.

He still does plenty of Xiang Sheng, often with a 300-pound Iranian partner training with the same Xiang Sheng master as Appell.

“You have a skinny Jewish guy and a fat Iranian guy doing Chinese comedy,” Appell said, noting that the absurdity of the juxtaposition is lost on Chinese audiences.

American-style stand-up offers Appell a way to get his own material onstage. Though Chinese people don’t know much about the Jews, Appell says they’re always excited to hear him talk about Judaism. A routine he recorded about being Jewish in China made it to the front page of China’s version of YouTube and quickly got 100,000 views.

“I feel like Jewish culture and Chinese culture have a lot of commonalities,” Appell said in one of his stand-up routines. “Jews at the age of 13 have a coming-of-age ritual. It’s called a bar mitzvah. We need to read lots of books, we have to study a new language, but whether we speak it or not doesn’t matter. There’s a lot of praying involved, and finally we share all the boring stuff we’ve learned. After I got to China I realized that Chinese people have a similar coming-of-age ritual at 13: It’s called the high school entrance exam.”

Ironically, Appel, who grew up in the heavily Jewish Boston suburb of Newton, Massachusetts, and attended Brandeis, the Jewish-sponsored nonsectarian university, says he has actually become much more Jewishly involved since moving to China.

“At Brandeis, the Jewish stuff was everywhere, so you could engage with it without stepping out of your way,” he said. “In China, if I don’t go to services, I’m not going to walk by services or see people lighting candles in their dorm room.”

Appell says he finds himself at the egalitarian Jewish congregation Kehillat Beijing nearly every Friday night – that is, if he doesn’t have a show. This year he emceed the community’s Passover seder, which drew 200 people on the holiday’s first night.

He says his mother often asks him if he’ll stay in China for good.