NEW YORK (JTA) — Rabbi Jonathan Rosenblatt asserted his innocence in his first public comment since the publication of a New York Times article about his practice of inviting young males to join him for naked heart-to-heart talks in the sauna.

In a letter sent Thursday to congregants of his Orthodox synagogue, the Riverdale Jewish Center in New York, Rosenblatt said he never did anything unlawful, does not agree with the accusations and attacks against him, and regrets if his conduct inadvertently offended anyone. He did not acknowledge any inappropriate behavior.

“If any of you feel that my behavior, even if innocent, was inappropriate, I apologize to those affected,” he wrote.

Earlier in the week, the board of the Riverdale Jewish Center sent a letter to congregants saying that Rosenblatt was not involved in any “misconduct.”

The story published last Friday on the Times website focused on Rosenblatt’s custom for decades of inviting male congregants or students, some as young as 12, to play squash or racquetball, then join him in the public shower and sauna or steam room, often naked. No one cited in the story accused Rosenblatt of sexual touching, but several expressed their discomfort with the practice and described the behavior as deeply inappropriate for a rabbi and mentor. At various times, Rosenblatt was told by rabbinic bodies or his congregation’s board to limit such activity.

This week, the Bronx District Attorney’s office said it was looking into whether Rosenblatt broke the law and urged any victims to come forward.

“I know that many of you are sharing the anguish that I and my family have been experiencing,” reads the opening of the letter to congregants from Rosenblatt, who is on a sabbatical from his pulpit in the Bronx. “I know that many of you, even some who are very close to me, feel bewildered and abandoned by my silence in the face of the onslaught of public accusations and attacks. If my silence has been construed as my agreeing with my accusers, nothing could be further from the truth.”

Rosenblatt said his lawyer, who has been identified in other reports as Benjamin Brafman, advised him not to respond publicly to the substance of the accusations.

In the letter, Rosenblatt said that he deeply regrets the humiliation that the articles in the press have caused him and his community, and that he “regret[s] if my conduct at any time inadvertently offended anyone” during his many years of service to the synagogue.

“I want to assure you however that it was never my intention to cause any harm, nor did I ever do anything that was unlawful,” Rosenblatt wrote. 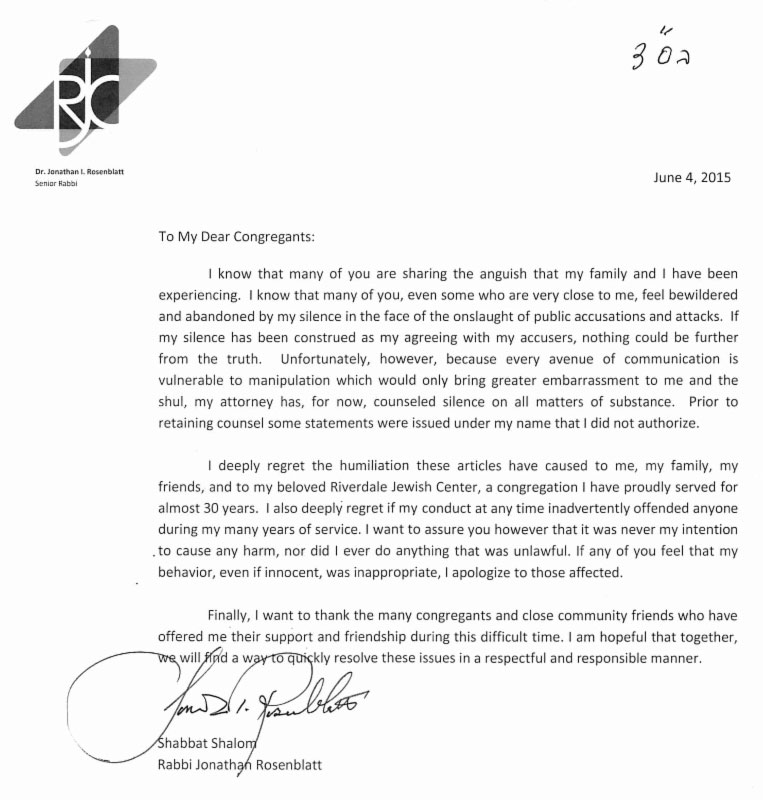