In Britain, Jewish and Muslim women connect over Mitzvah Day 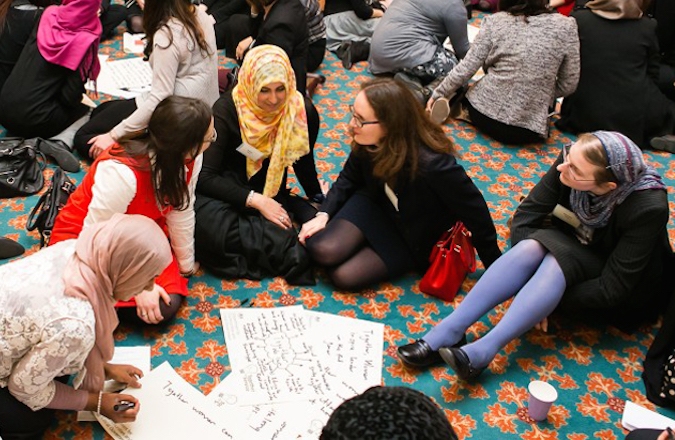 Participants of the launch of the Muslim and Jewish Women's Network at the Jewish Museum in Camden on June 9. (Yakir Zur)
Advertisement

(JTA) — Good deeds can be contagious. Just ask Laura Marks, a British Jew who is widely credited with creating one of her community’s most widely celebrated new traditions: an annual Mitzvah Day, now in its 11th consecutive year, in which thousands of British Jews perform charity work in retirement homes, homeless shelters, hospitals and even neglected cemeteries.

Inspired by the custom of some American Jewish communities, including in Los Angeles and Detroit, Marks thought the activity not only promised to brighten people’s lives but would give American-style confidence to a community where “many feel being Jewish is slightly embarrassing,” as Marks put it.

The idea took off — and its scope has reached far beyond the Jewish community. In 2010, inspired by Mitzvah Day, Britain’s Hindu community launched a date of good deeds called Sewa Day. And in March, the Muslim community held its first Sadaqa Day.

“I took the inspiration and the model completely from what Laura is doing, and I have no hesitation in saying that,” said Julie Siddiqi, director of the Islamic Society of Britain and the founder of Sadaqa Day.

Marks facilitated the creation of Sadaqa Day, and the cooperation between the two women gave birth to a new interfaith initiative that launched last week with an event at the Jewish Museum in the London Borough of Camden attended by 100 women.

In working together to adapt Mitzvah Day to the Muslim community, Siddiqi, a British-born convert to Islam, and Marks “realized charity and social action were an effective basis for strengthening women’s involvement in communal life in both communities,” Marks said.

For Muslim men and women, “Sadaqa Day’s a good way to show what their faith is about as opposed to what people think and read about Islam,” Siddiqi said. For Muslim women especially, she added, “it’s a way to do something self-led in a way that they are not given, or feel they’re not given, the opportunity to do normally in their male-led faith communities.”

Muslims and Jews unite around Mitzvah Day in Detroit, where members of both communities hold joint charitable activities each year. But Muslim-Jewish relations are far more strained in Britain, where Jews last year were the target of at least 1,168 anti-Semitic attacks, of which many are believed to have been perpetrated by Muslims over Israel’s actions last summer in Gaza. 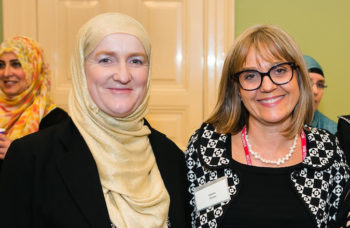 Julie Siddiqi, left, and Laura Marks, co-founders of an interfaith initiative for women, at the Jewish Museum in Camden, June 9, 2015. (Yakir Zur)

Across Europe, interfaith dialogue took a hit in recent years as Jewish communities reported attacks at record levels. In France, the French Council of the Muslim Faith pulled out of the annual dinner in February of its Jewish counterpart, CRIF, an umbrella of French Jewish communities and groups, after CRIF’s president said that most anti-Semitic attacks were the handiwork of Muslims. And in the Netherlands, the Jewish-Moroccan Network was disbanded amid fights over Israel.

“It’s true that when something happens in Gaza, people all over social media talk about it and it becomes very toxic,” Siddiqi said. But while politics can sometimes poison relationships, “Mitzvah Day and social action are apolitical, helping to form friendships that will hopefully stop the dynamic in the next round of violence,” she added.

At the interfaith event, participants divided into four tracks — sports, culture, business and social action — to brainstorm and draw up plans for interfaith work in those fields.

Women especially have the potential of changing the dynamic, according to Rabbi David Rosen, the England-born, Israel-based director of interreligious affairs at the American Jewish Committee.

“Despite the setbacks, interfaith dialogue is expanding and is actually more robust now than it has ever been,” Rosen said. He cited Vatican initiatives and a host of joint Jewish-Muslim actions to curb the radicalism that led to the slaying of 12 people in three attacks on Jewish targets in France and Belgium by Islamists since 2012.

In this context, Rosen added, the development of women’s initiatives “has great potential because it expands interfaith beyond the male-dominated establishment” of Muslim and Jewish communities, “reaching new audiences”— an  elusive goal for interfaith activists seeking to extend beyond their own progressive circles to compete for the rank-and-file’s hearts and minds.

“The contribution of women, who, I think we can all agree tend to be more sympathetic, can be profound,” Rosen said.

Back in London, Marks and Siddiqi’s new initiative is already bringing down barriers for Nicola Gee, a London Jewish mother of four who, despite having many Muslim friends, has never visited a mosque in Britain.

“Instead of writing 13 emails to arrange a tour or whatever, I called one of the women I met last week at the launch,” she said. “I’m going to the mosque Friday.”