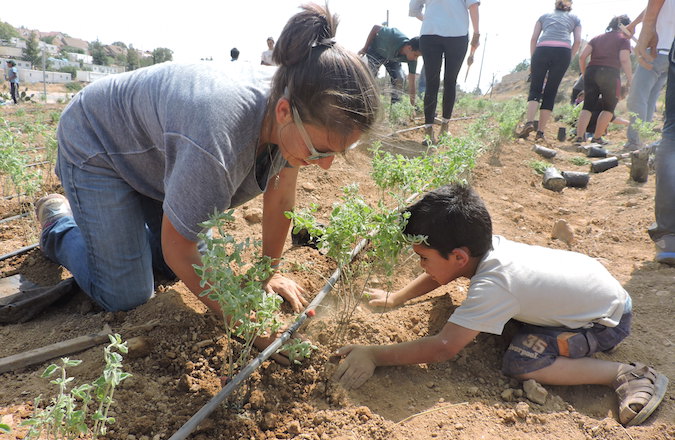 Nearly 100 volunteers, most of them in their 20s, helped plant gardens and pave a road in the Palestinian villages of the South Hebron Hills. (Ben Sales)
Advertisement

UMM EL-KHEIR, West Bank (JTA) — They dig their fingers into the dirt, their knees bearing into the ground as they embed sprigs of thyme in identical rows. The sun beats down on the small plot, and the work can be tedious, but these volunteers — most of them American, most of them Jewish — plant with a purpose.

They had met early Friday morning in Jerusalem and set off on an hourlong bus ride through the terraced, rocky hills south of the city. Upon arriving at their destination, a Palestinian village about 20 miles south of Hebron, residents welcomed them with coffee, tea and a short account of the community’s history that traced decades of war and resettlement.

Then the volunteers got to work.

Jews have long sought empowerment through working the land, but these volunteers did their work in Palestinian villages rather than Israeli ones. Their mission was one that both Palestinians and Jewish-Israelis have pursued for decades: to create “facts on the ground,” entrenching a community’s presence by deepening its footprint.

“We wanted to bring a large group of people to be a presence and do some actual physical work that will be helpful for the community,” said Daniel Roth, who was born in Toronto and immigrated 3 1/2 years ago to Israel. “We’re connecting on this very hands-on, life-bringing level.”

Nearly 100 volunteers on the trip, most of them in their 20s, were part of the Israel-based organization All That’s Left — a nod to the left-wing politics of its members, who oppose Israel’s occupation of the West Bank. Last Friday and Saturday, they helped plant gardens and pave a road in the Palestinian villages of the South Hebron Hills.

Early Zionists insisted that working the land could lead to self-determination in the Land of Israel, and they inspired waves of kibbutzniks to establish farming communes. Generations of tourists have made a point of planting a tree in one of the country’s national forests or sponsoring one through the Jewish National Fund’s blue tin charity boxes.

Adopting that ethos to support Palestinians drew criticism from Shmaaya Asolin, the spokesman for Israeli settlements in the South Hebron Hills. He called volunteers who work in the Palestinian villages “naive” and “anarchists,” and said Palestinians use these groups to provoke violence from the settlers.

“They make up fake stories and stain the reputation of settlers,” he said. “The camera is the weapon. They want to draw people out.”

The South Hebron Hills, which are under full Israeli civil and military control, have become a flashpoint of conflict in the West Bank. Palestinians there complain of lack of access to basic resources like water and protest Israeli restrictions on building permanent structures in their villages.

“I don’t know where the law or the justice is in this situation,” Nasser Nawajah, a resident of the nearby Palestinian village of Susiya, told the volunteers through a translator. “Here, in this place, the law that’s used is might makes right.”

Susiya, home to some 350 villagers, is a collection of tents on a rocky hill overlooking an Israeli settlement also called Susiya. The village lacks an electrical grid, running water and paved roads, and one of its only permanent structures is a small playground. Palestinian flags flutter from many tents.

After working Friday, the volunteers held a Shabbat service and had a communal meal with the Palestinian residents of Susiya. Many slept over and spent the next day volunteering and attending workshops on local Palestinian crafts like honey-making and embroidery.

The conflict and its consequences dominated the conversation on Friday, but some volunteers hadn’t come to choose a side. Some joined the group to see a new part of the West Bank, while others were attracted to the physicality of the work.

One participant, Ilona Gerbakher, 27, said the mission connected her to a community of left-wing Jews in Jerusalem.

“I’m glad that Israel exists,” said Gerbakher, a Jewish-American who is completing a doctorate in comparative Jewish and Islamic studies at Columbia University. “I’m blessed that this country is here and that I get to be a part of it. But I also firmly believe in the right of Palestine to exist.”