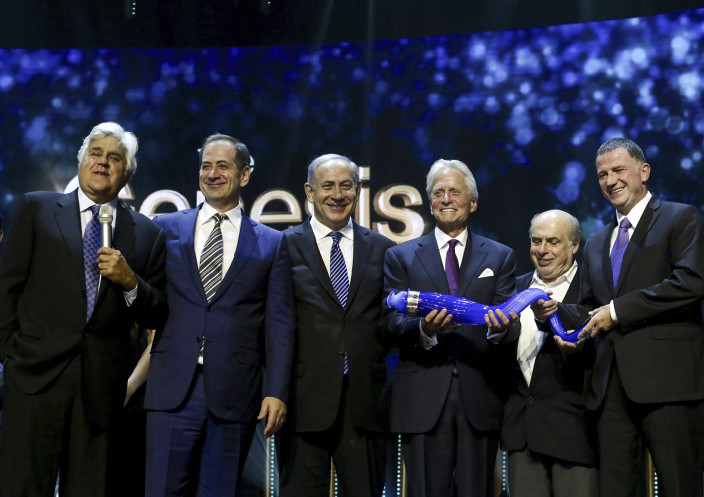 JERUSALEM (JTA) — Actor Michael Douglas credited his son and celebrity father for helping him reconnect to Judaism as he accepted the Genesis Prize, “the Jewish Nobel,” in Jerusalem.

Douglas, an Academy Award winner, accepted the $1 million award on Thursday night for his commitment to Jewish values and the Jewish people. His wife, the actress Catherine Zeta-Jones, and children, Dylan and Carys, were on hand for the ceremony.

In his address, Douglas noted his new ties to Judaism at age 70.

He said his son’s decision to have a bar mitzvah “made me think and it made me strong. And for that I will always be grateful.” His voice broke as he thanked Dylan, who had his bar mitzvah last June, and later his whole family for their support.

“My journey to this stage was a long time in the making,” Douglas said, adding that it led him “to be able to say those four words with great pride: I am a Jew.”

Douglas criticized those who “insist that to say those words” one has to be Jewish through his mother. His mother, Diana Dill, is not Jewish. Douglas said that choosing him to be the Genesis laureate “sends a message around the world.”

He said his father, the actor Kirk Douglas, also inspired him, having also reconnected to Judaism at 70. Kirk Douglas had a second bar mitzvah at 83.

“There was no contradiction between his Jewishness and his universality,” Douglas said of his father, who offered a videotaped greeting for the ceremony.

The prize is endowed by the Genesis Philanthropy Group, which endeavors to build Jewish identity among Russian-speaking Jews worldwide.

At the end of the program, host Jay Leno announced that an anonymous philanthropist was donating another $1 million for inclusiveness programs for intermarried families. Coupled with matching grant programs from Genesis and the Jewish Funders Network, some $3.5 million would be available for such programs as a result of Douglas’ prize.

The co-founder of the Genesis Prize Foundation, Mikhail Fridman, said the prize was established in order to inspire people “to reflect on their Jewishness and not take it for granted.” He described Douglas as “not a perfect Jew, yet he is someone who put his energy into being Jewish.” Fridman called on the Jewish community to welcome intermarried families and not turn them away.

A video presentation about Douglas was narrated by his wife and included praise from Jewish actors and directors. In his congratulatory remarks to Douglas, Israeli Prime Minister Benjamin Netanyahu lauded Douglas for having “pride in the Jewish people and pride in the Jewish state.”

Leno, who hosted the inaugural Genesis Prize ceremony last year, told the audience that he considers himself “Israel’s Shabbos goy,” and remarked that Albert Einstein was smart for turning down an offer to become the first president of Israel.

“Einstein knew it was easier to figure out the mysteries of the universe than to keep Israeli voters happy,” he quipped.