For this U.N. report on Gaza War, Israel came prepared 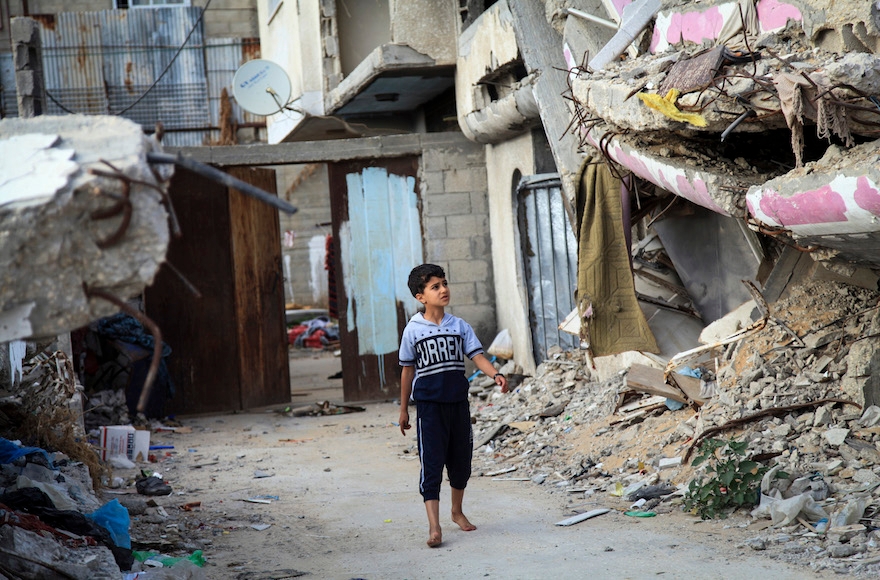 Palestinian children play in the rubble of buildings in Gaza City that were destroyed during the 50-day war between Israel and Hamas-militants in the summer of 2014, June 22, 2015. (Aaed Tayeh/Flash90)
Advertisement

(JTA) – This time, Israel and its supporters came prepared.

Anticipating what they believed would be an unfair U.N. report on last summer’s Gaza War, the Israeli government and friendly groups in the United States were ready with at least three reports they say better reflects the reality of the five-week engagement between Israel and Hamas.

The U.N. report, issued Monday, said Israel’s military and Palestinian armed groups committed “serious violations” of international human rights law during the conflict that in some cases may amount to war crimes.

While the 183-page report of the U.N. Commission of Inquiry on the 2014 Gaza conflict accused both sides of possible war crimes, its findings focused more on what it considers Israeli wrongdoing in its operation known as Protective Edge.

“The commission was deeply moved by the immense suffering of Palestinian and Israeli victims, who have been subjected to repeated rounds of violence,” reads the conclusions section.

Israel refused to cooperate with the commission, as it had with a similar commission after the 2009 war that resulted in the Goldstone Report, which stirred controversy.

This time, however, Israel had prepared its own report that said the escalation of attacks on Israel by Hamas and other terrorist organizations in the Gaza Strip justified its broader military operation under international law. It was released last week.

Additionally, the Jewish Institute for National Security Affairs in March commissioned a report by a panel of former U.S. military officials and legal experts. And earlier this month, the High Level International Military Group, a panel of retired military and diplomatic officials from NATO countries, came together under the “Friends of Israel” initiative and issued its own exonerating report.

Statements by Israeli Prime Minister Benjamin Netanyahu and Israel-friendly groups in reaction to the U.N. report alluded to the counter-reports.

“Fair-minded observers recently investigated Israel’s conduct in the Gaza campaign,” Netanyahu said in his statement Monday. “They include senior generals from the United States and NATO countries. They found that not only did Israel uphold the highest standards of international law, in the laws of armed conflict, they said that Israel exceeded the highest standards.”

The American Israel Public Affairs Committee in its statement cited the High Level International Military Group’s finding that “Israel not only met a reasonable international standard of observance of the laws of armed conflict, but in many cases significantly exceeded that standard.”

One reason for coming prepared this time around: The Palestinian Authority this year established a relationship with the International Criminal Court, which is assessing whether to institute criminal proceedings against Israeli and Palestinian officials in the wake of the war. ICC prosecutors must show that there has been no serious attempt to bring to account those responsible for abuses in order for the court to step in. An array of investigations could mitigate an international prosecution.

“We urge the administration and Congress to stand by our ally, particularly if international bodies seek to exploit this report to punish Israel,” AIPAC said in its statement.

The writing of the U.N. report was directed by Mary McGowan Davis, a former justice of the Supreme Court of New York. Davis replaced the original head, William Schabas, who resigned in April. Israel provided evidence to the U.N. Human Rights Council in Geneva that Schabas, a Canadian international law professor, had authored a seven-page legal briefing on behalf of the PLO for which he was paid.

The report called on Israel to “provide sufficient details on its targeting decisions to allow an independent assessment of the legality of the attacks conducted by the Israel Defense Forces and to assist victims in their quest for the truth.” It acknowledged that providing details on the targeting decisions could be a security risk for Israel that could “jeopardize intelligence sources,” but said that did not excuse Israel from doing so.

The report said that a “persistent lack of implementation” of recommendations by previous commissions of inquiry, fact-finding missions, U.N. treaty bodies, special procedures and other United Nations bodies “lies at the heart of the systematic recurrence of violations in Israel and the Occupied Palestinian Territory.” Past  U.N. commissions have recommended that Israeli and Palestinian authorities conduct good-faith investigations of the allegations and proceed with prosecutions where necessary.

Netanyahu reportedly has ordered his government ministers to refrain from commenting on the report until it can be studied and a response formulated.

Davis, in an interview with Israel’s Channel 2 Television, denied bias.

“I think we tried very hard to be even-handed, and there’s no bias at all in the report,” she said, according to the Times of Israel.

Responding to Netanyahu’s claims that the commission was not fair-minded, Davis said, “Well, I would say that he’s wrong. I doubt he had time to read all 183 pages. He’s a busy man.”