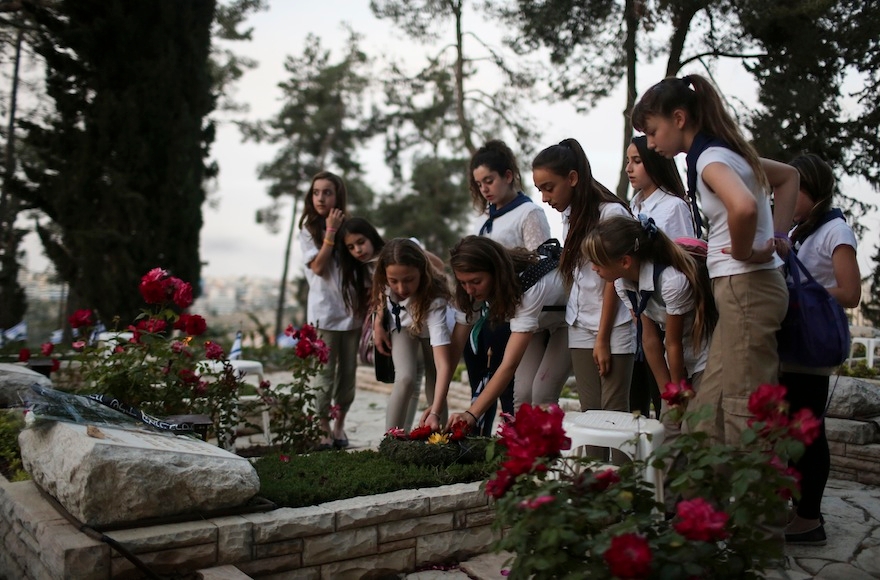 Israeli girls place a wreath on a soldier's grave on Mount Herzl, Jerusalem, for Memorial Day in 2014. (Hadas Parush/Flash90)
Advertisement

The ruling Thursday in Jerusalem overturned two lower court rulings dismissing a lawsuit filed in 2011 against the municipal burial society of the City of Netanya, the news site Nrg.co.il reported.

The lawsuit was filed by Susanne Ayad, who that year was instructed by chevra kadisha personnel to stand with other women, separate from men attending a funeral. The groups were separated by a row of flowerpots, and a municipal rabbi asked mourners to keep to their gender group.

“Despite objections by many of the funeral’s participants to this discriminatory demand, which is opposed to our worldview, we refrained from protesting out of sensitivity to the situation, and so we were forced to follow the rabbi’s instruction,” she wrote in her lawsuit. “Throughout the funeral, I felt humiliated, angry and insulted for being forced to comply in a public space to an order to stand at a designated place just because I am a woman.”

The Netanya Magistrate’s Court dismissed her lawsuit in 2013, with judge Smadar Abramovitch-Kollende ruling that the rabbi’s instructions were not discriminatory.

Israel’s Ministry of Religious Services that year issued a circular instructing rabbis not to impose gender segregation at cemeteries unless specifically requested to do so by the immediate family of the deceased. The family at the funeral Ayad attended made no such request. Ayad is a friend of the family.

Ayad appealed to the Supreme Court with the assistance of the Israel Religious Action Center of the Israel Movement for Progressive Judaism, a group representing the interests of Conservative and Reform communities.