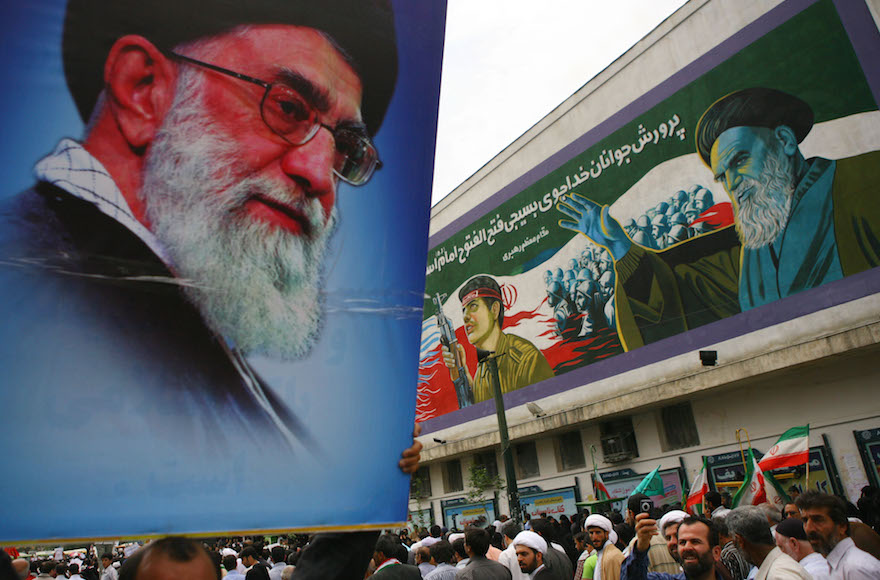 Khameini and AIPAC are seen as must-convince skeptics for their respective sides in the talks about Iran's nuclear program. (Majid Saeedi/Getty Images)
Advertisement

WASHINGTON (JTA) — In nuclear talks between Iran and the major powers, it’s deadline time, and skeptics on both sides are laying out red lines in a bid to shape a final deal.

Ayatollah Ali Khamenei, Iran’s supreme leader who had been wary of the talks, last week outlined his own expectations for the deal — and where there would be no compromise.

On the American side, a five-point memo circulated by the American Israel Public Affairs Committee has been influential in shaping how Congress and others are pressing the Obama administration.

Among the contentious issues are the period that restrictions must stay in place and how much Iran must reveal of its nuclear past.

Officials on both sides say that the talks being held in Vienna, Austria, will stretch for a week or so beyond Tuesday’s deadline.

Israeli Prime Minister Benjamin Netanyahu, whose adamant rejection of the emerging deal informs the AIPAC talking points, said Sunday that his skepticism was only increasing.

“This agreement is going from a bad agreement to a worse agreement, and is becoming worse by the day,” Netanyahu told his Cabinet.

Khamenei’s June 23 broadside to Iranian government officials and AIPAC’s memo, “Five Requirements for a Good Deal,” circulating for about a month, are being treated by experts on the talks as baselines for must-convince skeptics in both countries: the religious establishment in Iran and Congress in the United States. Under legislation passed in May, Congress gets an up or down vote on a deal.

Congressional insiders say the AIPAC memo features prominently in conversations lawmakers from both parties are having with administration officials.

It has also influenced other American groups seeking a say in the process. A letter last week organized by the Washington Institute for Near East Policy setting out concerns about the emerging deal and signed by 18 former government officials has a similar five-point format, as does a fact sheet by J Street that seeks to counter some of AIPAC’s points.

“We’re not talking about those who can be put in a corner and depicted as warmongers or neoconservatives,” he said. “This is a very balanced, moderate group of people who believe as AJC has long believed that we can do better at the negotiating table.”

David Makovsky, the Washington Institute fellow who convened the group, said that it had met nine times and conveyed its concerns to government officials. He also noted that the letter, which endorses outcomes that the Obama administration has said in the past are its aims, includes longtime Iran deal skeptics such as George W. Bush administration officials Stephen Hadley, Robert Blackwill and Paula Dobriansky, as well as former Sen. Joseph Lieberman, I-Conn.

The memos, as well as Khamenei’s speech, cover the same territory and demonstrate the degree to which the skeptics on each side differ.

• AIPAC is demanding “short notice” nuclear inspections “anytime and anywhere,” “including all military locations.” Khamenei says he does not agree with “inspecting military centers” and says the International Atomic Energy Agency, the atomic watchdog of the United Nations, must not be the sole arbiter determining compliance with the deal.

• AIPAC says sanctions can be lifted only once the IAEA “provides ongoing verification that Iran is meeting the conditions of the deal.” Khamenei plainly says: “Lifting sanctions should not depend on the fulfillment of Iran’s commitments.”

• AIPAC says the 10- to 15-year sunset clause anticipated for some of the deal’s reported restrictions is too short. “A good deal must not expire until Iran has proved over time that its nuclear ambitions are for peaceful purposes only,” the group said. Khamenei says even the expected time limits amount to “bullying.” “They say that we should not do anything for 10, 12 years and that we can engage in production and development after that,” he said. “This is bullying and an exceedingly wrong statement.”

• AIPAC says “Iran must dismantle its nuclear infrastructure so that it has no path to a nuclear weapon.” Khamenei says that even during the restriction period that Iran would accept, “research, development and production should continue.”

• AIPAC wants Iran to “fully explain its prior weaponization efforts.” Iran denies that it has ever weaponized, saying its research has been peaceful all along. “I do not agree with extraordinary investigations” Khamenei said, “nor do I agree with questioning political personalities in any way nor with inspecting military centers.”

The Washington Institute letter elaborates on some of the demands sought by AIPAC and Israel in ways that could satisfy lawmakers in Congress who are skeptical but do not want to kill a deal at all costs, said Makovsky, who until last year was a member of the Obama administration’s Israeli-Palestinian peace-brokering team.

“We went for something we thought could get consensus,” he said.

Instead of requiring Iran to come clean about its weaponization, as Israel and AIPAC have sought, the letter calls for an investigative approach that stops short of requiring a confession from Iran. Inspectors must be able “to take samples, to interview scientists and government officials, to inspect sites, and to review and copy documents,” the letter said. It also asks for “timely” access for nuclear inspectors as opposed to AIPAC’s “anytime, anywhere” demand, it does not mention the need for “decades” of restrictions, as AIPAC’s does, and does not call for dismantling nuclear infrastructure.

Mark Dubowitz, the executive director of the Foundation for Defense of Democracies, a group skeptical of the Iran deal that has consulted with Congress and the administration, said the AIPAC parameters provided the stronger reassurances.

“While there are strong elements to the parameters in the [Washington Institute] letter, the AIPAC parameters provide greater assurances that any Iran deal would provide a much more timely and intrusive regime of ‘anytime, anywhere’ inspections, a deal of longer duration that would not provide Iran with a virtually instant breakout capability after 12-13 years,” he said.

Khamenei made clear in his speech the trust he was placing in the Iranian negotiators, a warning to hard-liners who oppose the negotiations that may prove more significant than the red lines he outlined.

“They are not infallible and they may make a mistake in their decisions and actions, but the important point is that we believe in their trustworthiness, their piety, their zeal and their courage,” Khamenei said.

Alireza Nader, an Iran analyst at the Rand Corp. think tank, says it would be unrealistic to expect the Iranians to capitulate outright to the demands outlined by AIPAC and Israel.

“If the goal is ‘anytime, anywhere’ access and unlimited inspections, it’s not realistic asking a sovereign country not defeated in war,” he said. Instead, Nader said, the question was, “How can a middle ground be reached in which the IAEA has access and Iran can be assured it won’t expose its conventional secrets to inspectors?”