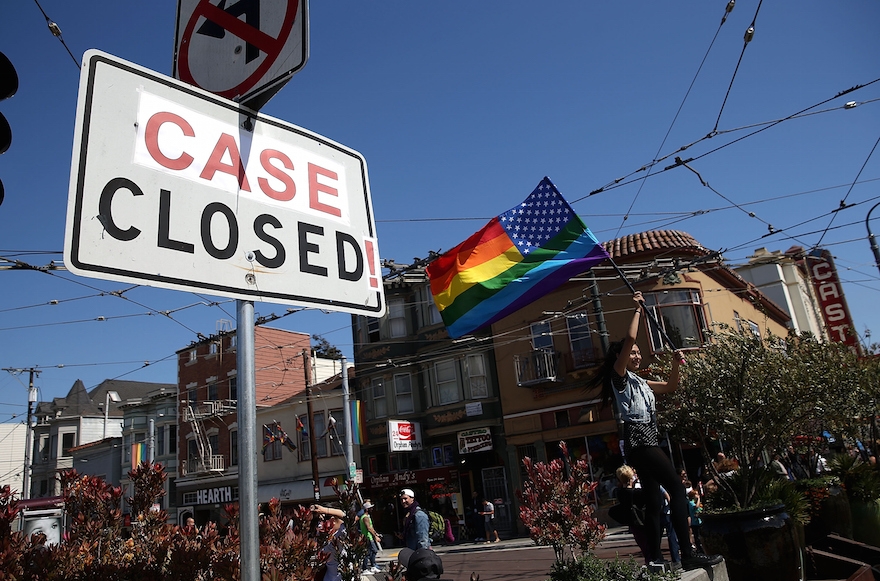 WASHINGTON (JTA) – The name that keeps coming up when Orthodox Jewish groups consider the consequences of last week’s U.S. Supreme Court decision extending same-sex marriage rights to all states has little to do with Jews or gays.

Bob Jones University, the private Protestant college in South Carolina, lost its tax-exempt status in 1983 when the Supreme Court ruled that its policies banning interracial dating on campus were “wholly incompatible with the concepts underlying tax exemption.”

“It remains to be seen whether gay rights advocates and/or the government will seek to apply the Bob Jones rule to all institutions that dissent from recognizing same-sex marriage,” Nathan Diament, the Washington director for the Orthodox Union, said in an email.

The groups point to an exchange in April between Donald Verrilli, the Obama administration solicitor general, and Supreme Court Justice Samuel Alito, who asked whether a school could lose its tax-exempt status if it opposed gay marriage?

How much of an issue is what is now exercising Jewish groups. Will Jewish schools lose their tax-exempt status if they don’t recognize gay couples? Could they become ineligible for government grants? Or face discrimination lawsuits for teaching the traditional Jewish perspective on homosexuality?

Abba Cohen, who directs the Washington office for Agudath Israel of America, called the court’s ruling an “ominous” sign.

“When an impression is given that religious views are bigoted and are vilified, and that [their adherents] really should be given the status of second-class citizens, once you’re dealing in that kind of atmosphere, you don’t know what kind of disadvantages and disabilities people will suffer,” Cohen said.

After the court’s decision was released on Friday, an array of Jewish groups were rejoicing, including several that had joined briefs in favor of same-sex marriage. But the Orthodox groups — including Agudah, the O.U. and the Rabbinical Council of America — expressed worry.

“We are deeply concerned that, as a result of today’s ruling, and as the dissenting justices have pointed out, members and institutions of traditional communities like the Orthodox Jewish community we represent may incur moral opprobrium and risk tangible negative consequence if they refuse to transgress their beliefs, and even if they simply teach and express their religious views publicly,” said a statement from Agudah, which had filed an amicus brief opposing same-sex marriage.

The justices themselves acknowledged the possible fallout for religious groups. Anthony Kennedy, writing for the majority, said the First Amendment protected religious groups that wished to advocate their view that same-sex marriage is illegitimate. But in their dissents, Chief Justice John Roberts and Clarence Thomas said such protections were insufficient.

“Hard questions arise when people of faith exercise religion in ways that may be seen to conflict with the new right to same-sex marriage …,” Roberts wrote. “There is little doubt that these and similar questions will soon be before this Court. Unfortunately, people of faith can take no comfort in the treatment they receive from the majority today.”

Marc Stern, the counsel for the American Jewish Committee, which also filed an amicus brief in favor of same-sex marriage, said immediate consequences were unlikely at the federal level. But on the local and state levels, there would be challenges, Stern said, especially in areas where the gay community has a strong political presence.

“Will a state or city official take the decision to remove a tax exemption? In San Francisco, it’s a possibility. In New York City, it might happen,” said Stern, who pointed out that he was speaking as a legal analyst and not expressing the AJC’s views.

Another potential challenge cited by Diament is whether groups that reject gay marriage might become ineligible for government grants. Diament cited a debate that erupted during the administration of George W. Bush a decade ago over whether drug rehabilitation programs run by proselytizing religious groups should be eligible for funding through the White House’s faith-based initiative.

“We also can anticipate a fight akin to what we had in the context of the Bush faith-based initiative — whether institutions must recognize same-sex marriage to participate in government grant programs,” Diament said.

The Agudah’s Cohen wondered whether Jewish adoption agencies might be prohibited from limiting placement to heterosexual couples, or if schools run by religious groups that reject homosexuality could be subject to discrimination lawsuits.

“If you teach what the Torah says about homosexuality, and you admit all kids to your schools, are you creating a hostile environment?” he asked, noting the possibility that some of the children might have same-sex parents or, as they grow older, realize their own orientation is gay.

Rabbi Jonah Pesner, the director of the Reform movement’s Religious Action Center and a supporter of the Supreme Court ruling, said such concerns are overblown.

“We will continue to advocate for a healthy balance for religious institutions honoring their traditions and values and needs for a society to protect and defend all people,” Pesner said. “It’s important that faith groups are able to treat people equally and uphold their traditions.”