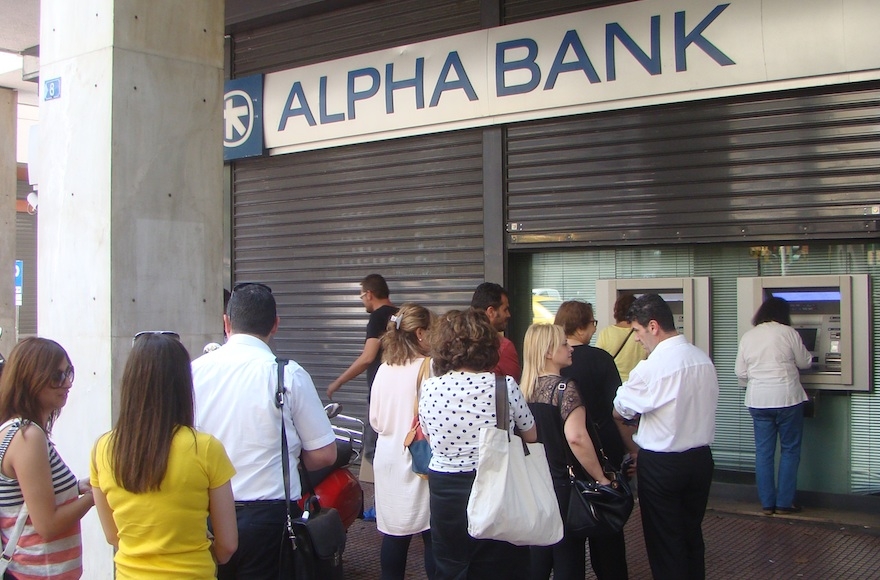 Greeks wait in line outside a shuttered bank to withdraw their daily allowance of 60 euros. (Gavin Rabinowitz)
Advertisement

ATHENS, Greece (JTA) — For 55 needy Jewish families, a cash welfare payment is the only thing that gets them through the month. But when they came to the Athens Jewish Community last week for their July assistance, they were given only a portion of the payment in cash — the rest was in supermarket food coupons.

“We just don’t have cash and we can’t get anymore, the banks are closed,” said Taly Mair, the community director who oversees the welfare program. “We hope to make the rest up to them later.”

Scenes of turmoil and uncertainty have played out across Greece over the past week with the country on the verge of bankruptcy after failing to make a payment to the International Monetary Fund. Banks have been shut, ATM withdrawals are limited to 60 euros (about $66) a day, and panicked citizens are stocking up on staples such as bottled water, pasta, lentils and baby formula.

READ: Why is Greece the most anti-Semitic country in Europe?

Amid the economic crisis — and especially following the country’s overwhelming rejection in a referendum Sunday of the terms offered by Greece’s European creditors — the Greek Jewish community of about 5,000 is grappling with two main concerns: how to provide emergency assistance to Jews in need and how to ensure that the Jewish institutions can continue to function.

Among those particularly hard hit are the poor and elderly members of the Jewish community, including many Holocaust survivors. A number of them don’t have bank cards, meaning they are unable to access their pensions or Holocaust restitution payments.

While the government insists that the referendum’s defeat leaves Greece better positioned to negotiate a deal beneficial to Greek citizens, many observers believe that Greece as a result could be forced out of the Eurozone, the community of nations that have adopted the euro as a common currency. The country’s finance chief resigned Monday. 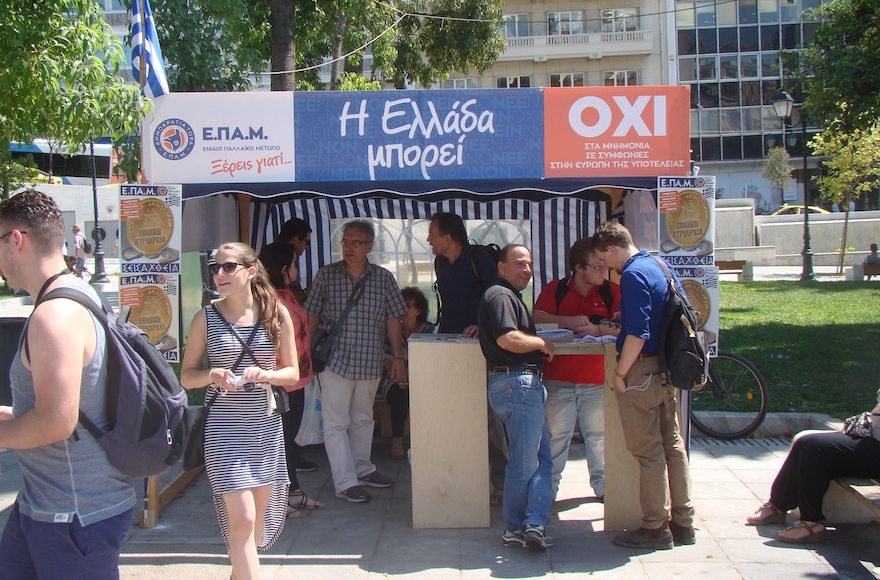 Workers set up a stage for a “No” protest to be held in central Athens on Thursday. (Gavin Rabinowitz)

The Jewish community has traditionally been in favor of staying in the Eurozone, and in the European Union, but did not take an official position ahead of the referendum, encouraging members to decide for themselves.

Greece has been in a deep financial crisis for the past six years; two massive financial bailouts from Europe and international institutions have failed to alleviate the problems. A harsh austerity plan imposed by creditors has seen the country’s economy shrink by 25 percent and its unemployment rates rise sharply.

For the Greek Jewish community, the financial crisis is just the latest setback in a chain of events that has seen Europe’s oldest, and one of its most storied, communities dwindle to just a few thousand members.

Jews trace their history in Greece to 300 BCE, and the country is home to the ruins of the oldest known synagogue in the Diaspora. Greece’s Romaniote Jews, neither Ashkenazic nor Sephardic, were joined in the 15th century by Spanish Jews who had been expelled from their homeland. Greece’s Jewish community numbered 78,000 on the eve of World War II — most lived in the port city of Thessaloniki — and was nearly wiped out in the Holocaust.

In recent years, the community has been diminished further by the economic woes and the European Union-imposed austerity measures, including cuts to wages and pensions. Many younger Greek Jews, faced with youth unemployment of 50 percent, left the country, most of them looking to work or study in other European countries.

Today, most of the nation’s Jews live in Athens, and a large portion of them are elderly. In recent years the community has sought assistance from the Jewish Agency for Israel and other international Jewish groups, such as the World Jewish Congress and the American Jewish Committee. The American Jewish Joint Distribution Committee has provided some $400,000 this year in emergency funding the Greek Jewish community, the organization said.

The economic crisis also brought with it a rise in anti-Semitism. In 2012 the neo-Nazi Golden Dawn became the third-largest party in Greece, while surveys from the Anti-Defamation League show that Greece has the highest levels of anti-Semitic feelings in Europe. According to the polls, 85 percent of Greeks believe some Jewish stereotypes, such as Jews have too much influence over the global economy.

Last week, in response to an impasse in negotiations over a new bailout deal, panicked Greeks pulled billions from their accounts, forcing the government to shut banks. Which is why welfare payments from the Jewish community are so crucial.

The Central Board of Jewish Communities in Greece “is continuing to help, in the spirit of Jewish solidarity, so that no Jew will be left without a meal or can’t meet their basic needs,” said Victor Eliezer, a member of the umbrella organization of Greece’s Jewish communities.

In addition to food coupons, the Athens community is also working with a pharmacy to ensure that community members have access to needed medications, Mair of the Greek capital’s community told JTA.

Another concern is making sure that Jewish institutions — synagogues, the retirement home outside Athens, community centers and schools — can stay open.

The Jewish youth summer camp started on Monday, despite many concerns.

“We have to figure it out, how are we going to organize, provide food, transport and security for all the children,” Mair said, adding that many parents have been reluctant to send their children away in such times of uncertainty. “Parents are afraid when the situation is so fragile.”

There is also worry about how to keep all the other institutions running, too, and no clear plan, said David Saltiel, who leads the Jewish community in Thessaloniki.

“Very shortly we won’t have money to pay salaries and the needy,” he said. “The whole system is down, and the community functions within the system.”