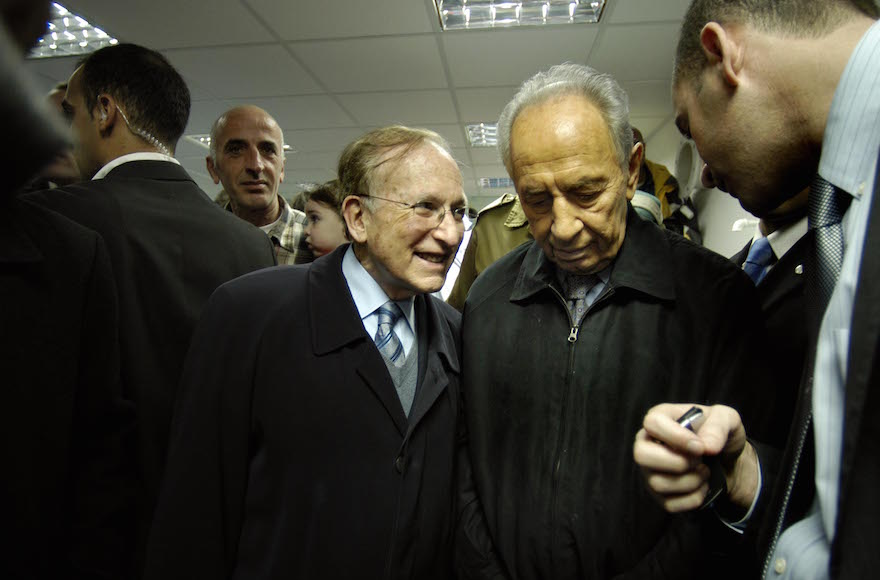 Lord Greviile Janner, left, with former Israeli Prime Minister Shimon Peres during a visit to Israel in 2009. (Courtesy of the office of Lord Janner)
Advertisement

LONDON (JTA) — Back in 1991, as he was led away from the courtroom, convicted child molester Frank Beck shouted out an accusation against one of the most prominent British Jews. Greville Janner, a former leader of British Jewry and lawmaker for the Labour Party, Beck screamed, was his eager accomplice in the sexual exploitation of several young boys.

Janner, a former chair of the Board of Deputies of British Jews, proclaimed his innocence during police probes in 1991, 2002 and 2007.

“As a veteran politician, one makes enemies,” Janner, a British lord and baron, told the Israeli newspaper Haaretz in 2009. “Being a Jewish community leader and advocate of Israel exposes me to baseless attacks on my honor. That’s what we’re seeing here.”

But over the years, accusations of criminal misconduct have continued to pile up.

In April, England’s director of public prosecutions, Allison Saunders, said Janner, who now suffers from Alzheimer’s dementia, should have been prosecuted when he was still fit to stand trial. And late last month, the Crown Prosecution Service decided to bring Janner’s case to a jury. Given Janner’s dementia, prosecutors are proceeding with a “trial of facts” that could carry neither a sentence nor conviction, the service announced.

The latest developments have spawned plentiful conspiracy theories about a possible cover-up and a plethora of anti-Semitic rhetoric online.

Janner, who resides at a long-term care facility, is not required to be present when the jury reviews 22 counts of alleged sexual abuse, including several involving sex with boys under age 16, that he stands accused of committing between 1969 and 1988.

The trial, to begin sometime after August, “ends this story,” said Eric Moonman, a Jewish former lawmaker for Labour who has worked closely with Janner. “That’s the only advantage of having this trial of facts.”

Moonman said he was in no place to judge whether or not the allegations are founded, but spoke of a “sustained campaign” against Janner that “probably aggravated enormously his mental and physical condition.”

Beyond the ramifications for Janner, his family, who proclaims his innocence, and his accusers, the case against the one-time face of British Jewry — he headed the Board of Deputies for six years until 1984 and served as vice president of the World Jewish Congress until 2009 — has inevitable implications for a minority that is feeling increasingly isolated amid rising levels of anti-Semitism.

“Certainly this is something Anglo Jewry could do without,” said Geoffrey Alderman, an expert on British Jewry at the University of Buckingham. Janner, Alderman added, had taken the lead in arguing for reparations from Germany to Holocaust survivors. Moonman said that Janner linked “Israel with Britain in a way very few Jewish leaders have done.”

Not surprising, then, that “anti-Semites are exploiting these allegations for what they are worth,” Alderman said.

A far-right blog called The Occidental Observer is a case in point. In April, it said that Janner “prospered over the decades of his slithering along the corridors of power, not least due to his astute playing of the Jewish ethnic card.”

Janner, whose father also served in the Parliament, has three children, including Laura Janner-Klausner, a prominent rabbi at the Movement for Reform Judaism and one of Britain’s best-known Jewish figures. Her office declined JTA’s request for comment.

Nobody other than the victims and the police “understand how perverted a man Lord Janner is,” Hamish Baillie, a 47-year-old father of three who claims that Janner abused him 32 years ago in a Leicestershire forest, said in an interview with the Daily Mail.

Like several other complainants, Baillie claims he came to know Janner while staying at the Leicester care-home of Beck, who died in jail in 1994. Baillie said Janner abused him for the first time in 1983, when he was 15. The incident, Baillie said, took place during a game of hide-and-seek that Beck organized at a Leicestershire park.

Baillie, who is among a handful of accusers who waived their right to anonymity, told the Daily Mail of Janner, “It was indecent touching but he wanted it to go further … It lasted no more than 30 minutes, but it felt like an eternity.” Baillie, who did not report the incident to police at the time, said Beck “tipped Janner off” about where to find him.

An amateur magician who often entertained children with his tricks, Janner said he came to Beck’s home for boys, a residential center for troubled teens, to help them.

The jury deciding on Janner’s case will also review testimonies that Janner molested another boy who had joined him on a trip to Scotland in the 1970s. That accuser, who has not revealed his identity, did file a police complaint in 1991. Yet prosecutors conceded that they never saw the complaint. Prosecutors in Scotland are now looking into what happened.

The mystery of that complaint fueled lingering suspicions — some disseminated on anti-Semitic, far-right websites — that Janner used his vast network of contacts to bury the cases against him.

Even if no such conspiracy existed, the establishment “closed ranks” on Janner, according to the Guardian columnist Jay Rayner.

“Janner was a barrister and MP, a man who campaigned for justice for the victims of the Holocaust,” Rayner wrote. “The possibility that Janner had also been guilty didn’t seem to occur to them.”