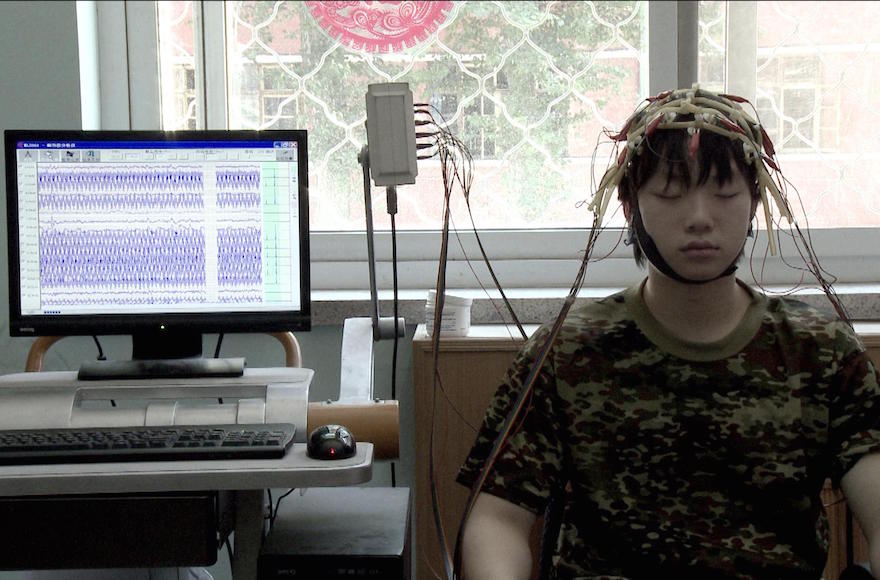 A scene from the documentary "Web Junkie," which looks at one of some 400 military-style facilities to treat Internet addiction in China. (Dogwoof Global)
Advertisement

(JTA) — Wang “Nicky” Yuchao, a Chinese 16-year-old, thought he was going skiing in Russia with his parents. Instead they brought him to one of some 400 rehabilitation clinics in China dedicated to treating Internet addiction disorder.

Wang spends his days confined to a repurposed army base in Daxing, just south of Beijing. The facility is stark, with cold gray hallways and metal bars in places. Treatment consists of a combination of army boot camp drills, therapy sessions, board games and antidepressants. And of course, he is given no access to Internet or gaming consoles.

Two Israeli filmmakers, Shosh Shlam and Hilla Medalia, spent three months inside the rehab facility to chronicle how China treats addiction to what one therapist in the film calls “electronic heroin.” Their documentary, “Web Junkie,” premiering July 13 on PBS, follows Nicky — who had the habit of playing “World of Warcraft” some 10 hours a day — and two other patients throughout their months-long stints at the clinic in 2010.

“Web Junkie,” which was nominated for the Grand Jury Prize at the 2014 Sundance Film Festival, highlights the potential “dark side of the Internet,” as the filmmakers explain, by looking at kids who live their lives online — to the exclusion of all else, including family, friends and school. As Medalia told JTA, “Some kids wear diapers as not to miss a minute of the game.”

READ: Orthodox Jews grapple with the ubiquity of the Internet

Back in 2008, Shlam saw an Australian news broadcast about a Chinese youth who was beaten to death in one of the country’s treatment centers. She said the story shook her and inspired her to make the film.

The director of the Daxing facility gave the filmmakers unprecedented access to the rehab center, even insisting that they stay on the base as opposed to commuting in and out each day.

It is still widely debated among psychologists whether or not Internet addiction is an actual psychological disorder that can be treated. China is the first country to list it as such, having done so in 2008 — some argue it was an attempt by the Communist government to further control its citizens.

American teens are online “almost constantly,” according to a recent study by the Pew Research Center. Internet addiction is not listed as a clinical disorder in the “Diagnostic and Statistical Manual of Mental Disorders,” published by the American Psychiatric Association. Gambling is the only behavioral disorder recognized by the guide, though Internet addiction disorder was listed recently in the manual’s appendix as requiring further research.

Israel also uses the manual and does not classify Internet addiction as an official disorder. Still, a 2012 study by the World Health Organization  indicated that young Israelis aged 11 to 15 spend more time surfing the Internet than their peers anywhere else in the world. Perhaps this isn’t surprising: As part of its identity as a “Start-up Nation,” Israel’s economy supports technological innovation, having created popular digital products like the navigation app Waze.