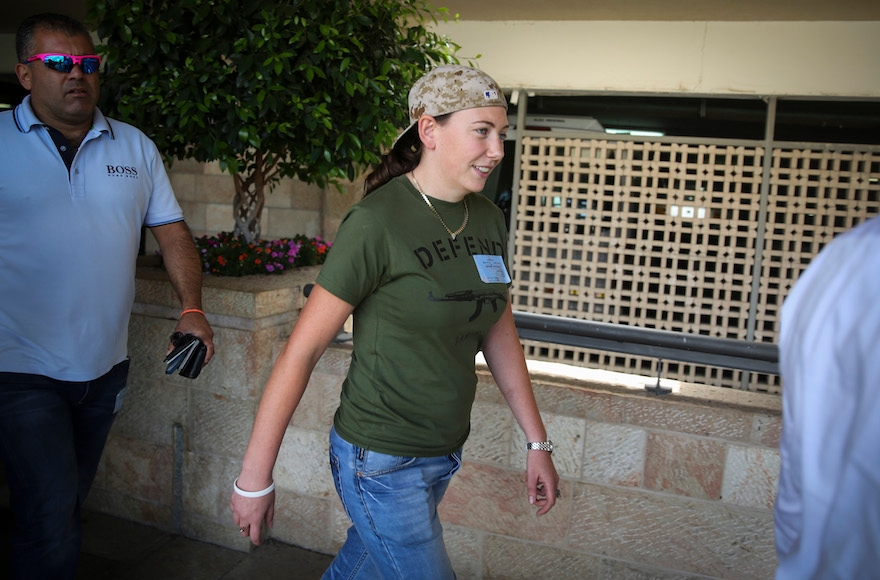 Gil Rosenberg seen outside the Knesset on July 13, 2015, after returning to Israel from fighting with the Kurds against Islamic State in Syria. (Hadas Parush/Flash90)
Advertisement

JERUSALEM (JTA) — A Canadian-Israeli Jewish woman who joined Kurdish forces in their fight against the Islamic State has returned to Israel.

Gillian Rosenberg returned on Sunday, Ynet reported, after having been out of contact for most of the last eight months. She began training with the Kurds in Iraq last November.

Rosenberg, 32, said she left Syria in January and moved to Iraq, spending a week in Paris before returning to Israel.

“It was a difficult decision to leave my friends in the fighting,” she told Army Radio in an interview on Monday, “but the many of the dynamics of the war have changed and there is much more Iranian involvement. Things changed enough to make it feel it was time to come home, and my home is Israel.”

Rosenberg first fought with Kurdish YPG guerrillas in Syria, and then with the Dwekh Nawsha, a Christian militia in Iraq. She kept quiet about being Jewish and Israeli and just said that she was Canadian.

“It’s good to be home. I’m here for now, and don’t plan on going back there anytime soon,” she told Ynet.

Dozens of people welcomed her back in messages on her Facebook page.

It was rumored last year that she had been taken captive by the jihadist Islamic State. She quashed the rumors with a post on Facebook.

Rosenberg was questioned by the Shin Bet security service upon her return. Israeli citizens are barred from visiting enemy states including Syria and Iraq.

Rosenberg made aliyah from Canada in 2006 and served as an instructor in an Israeli army search-and-rescue unit.

She told Army Radio that she felt because of the lessons of the Holocaust she was bound to help protect the innocent people being threatened by ISIS.

“We Jews always say the Holocaust never again, but for me it is not only Jews, but to every human being,” she said. “We’re supposed to be a light unto the nations and to do the right thing not only for ourselves but for every human being that needs help.”