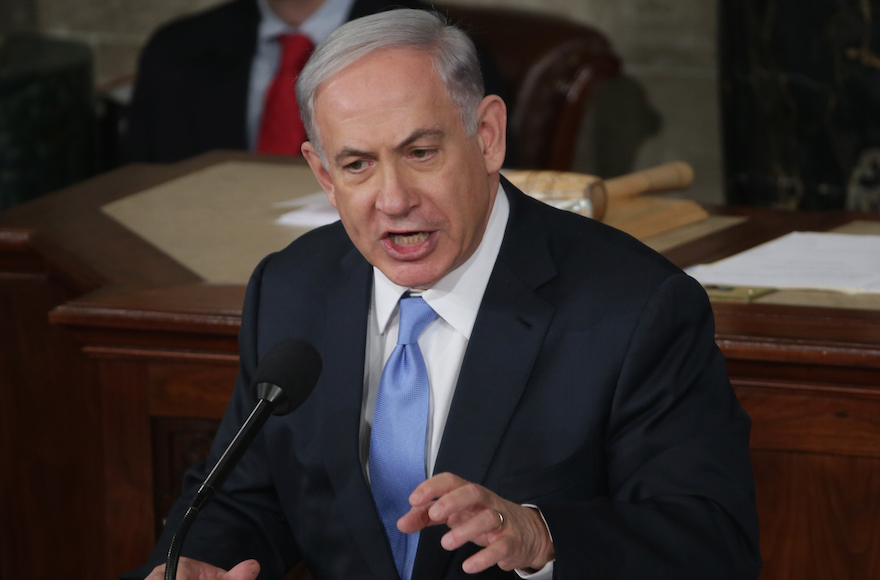 Israel Prime Minister Benjamin Netanyahu speaks about Iran during a joint meeting of the United States Congress in the House chamber at the U.S. Capitol, March 3, 2015, in Washington, DC. (Alex Wong/Getty Images)
Advertisement

Netanyahu, who has vehemently opposed the accord since negotiations between the parties began in 2013, said Tuesday in Jerusalem that “the world is a much more dangerous place today than it was yesterday” due to the agreement.

“The international community is removing the sanctions, and Iran is keeping its nuclear program,” Netanyahu said at a news conference, referencing an earlier statement by Iranian President Hassan Rouhani. “By not dismantling Iran’s nuclear program, in a decade this deal will give an unreformed, unrepentant and far richer terrorist regime the capacity to develop many nuclear bombs.”

Netanyahu said Israel remains committed to preventing Iran from obtaining a nuclear weapon and that the agreement will not limit Israel’s actions.

“Israel is not bound by this deal with Iran because Iran continues to seek our destruction,” he said. “We will always defend ourselves.”

Netanyahu compared the agreement to an accord signed between world powers and North Korea meant to limit that country’s nuclear program. In 2006, North Korea tested a nuclear weapon.

“Iran’s support for terror and subversion will actually increase after the deal,” he said. “This deal repeats the mistakes made with North Korea. There, too, we were assured that inspections and verifications would prevent a rogue regime from developing nuclear weapons. We all know how that ended.”

The prime minister also accused world powers of mistakenly assuming that Iran’s theocratic regime would fall by the time some provisions of the deal expire in a decade. He said the deal makes regime change less likely by empowering Iran’s current leadership.

“They gambled that in 10 years’ time, Iran’s terrorist regime will change while removing any incentive for it to do so,” Netanyahu said. “In fact, the deal gives Iran every incentive not to change.”