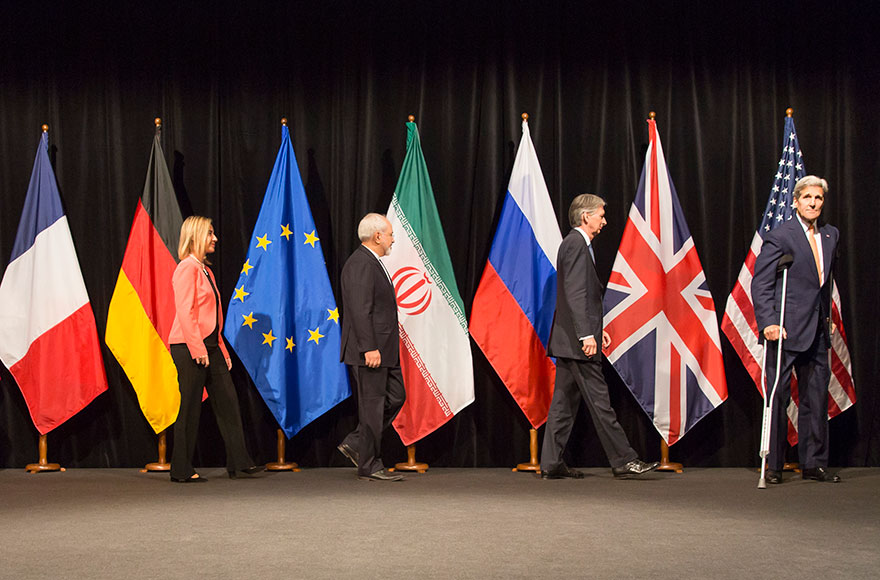 Secretary of State John Kerry, right, and other negotiators of the Iran nuclear deal in Vienna after agreement was announced, July 14, 2015. (Thomas Imo/Photothek/Getty Images)

Diplomats from the six countries negotiating the accord — the United States, the United Kingdom, Germany, France, Russia and China — were meeting Tuesday afternoon in Vienna following two years of U.S.-led negotiations and three weeks of the last round of talks. They plan to release the agreement’s details following the meeting.

“I think we all know that the decision we are going to take today is not only on Iran’s nuclear program but it is much, much more than this,” Federica Mogherini, the European Union’s high representative for foreign affairs and security policy, said at the start of the meeting. “It is a decision that can open the way to a new chapter in international relations and show that diplomacy, coordination, cooperation can overcome decades of tensions and confrontations.”

The agreement reportedly will limit Iran’s uranium enrichment for up to 15 years in exchange for lifting international sanctions on Iran. The sides reportedly have agreed on an inspections regime that would allow monitors full access to Iran’s nuclear sites, though the inspectors would have to give advance notice before the inspections.

The United Nations Security Council is expected to endorse the deal in a resolution. The agreement, according to reports, will last 10 to 15 years.

Israel has stridently opposed the prospective accord. On Sunday, Prime Minister Benjamin Netanyahu told his Cabinet that the agreement “paves Iran’s way to many nuclear bombs.”

“Iran does not hide its intention to continue its murderous aggression even against those with whom it is negotiating,” he said Sunday. “Perhaps there is someone among the great powers who is prepared to capitulate to this reality that Iran is dictating, which includes its unending calls for the destruction of Israel. We will not pay the price for this.”