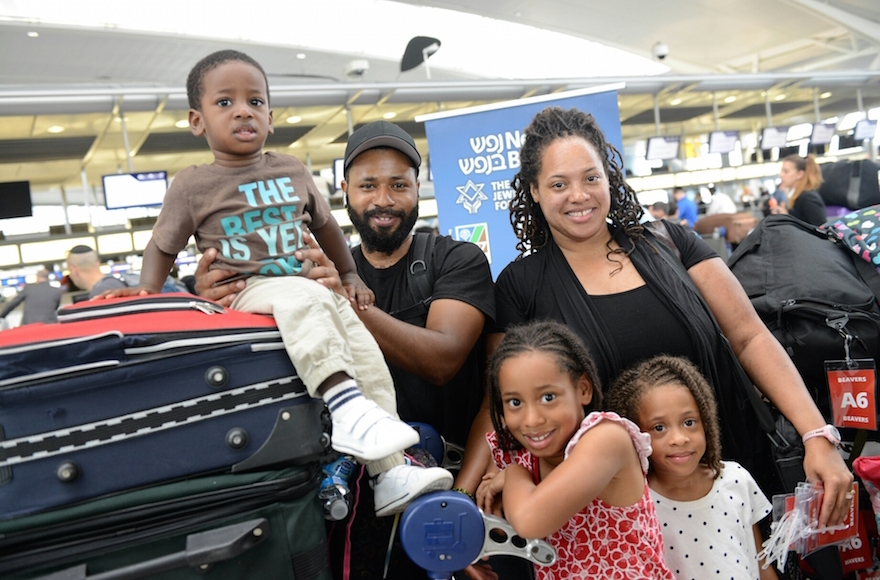 Tracy and Aaron Beavers, both 35, at JFK Airport in New York with their children, from left to right: Chanan,1, Anayah, 8, and Gabrielle, 6, before making aliyah on Monday, July 13, 2015. (Courtesy: Shahar Azran/Nefesh B'Nefesh)
Advertisement

TEL AVIV (JTA) — Professional lacrosse player Chase Clark was told that there are three keys to survival in Israel: Realize that everyone else thinks their time is more important than yours, avoid the crazy drivers while crossing the road and enjoy yourself as much as possible.

Before this week, Clark had never been to the Jewish state. But on Monday, the Grand Junction, Colorado, resident moved there — with big plans to play for the country’s national indoor lacrosse team.

“I found out later in life that I wanted to find more of my religion,” said Clark, who has a blue and yellow Star of David tattoo on his calf. “Now I’m going to the holiest place in the world. How can you not be excited about that?”

Clark, 25, was one of 221 Jews who moved to Israel on Monday via the 53rd charter flight organized by Nefesh B’Nefesh, a nonprofit founded in 2002 to encourage and facilitate the aliyah process for Jews from North America and the United Kingdom. Israel’s Ministry of Aliyah and Immigration Absorption, the Jewish Agency for Israel, Keren Kayemeth LeIsrael and JNF-USA were partners in the effort.

Nefesh B’Nefesh is funded in part by the Israeli government, the Jewish Agency and private donations. 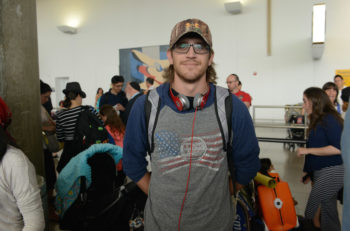 For most of the passengers, who hailed from 14 states and Canada and ranged in age from 4 months to 90 years (Sue Tyler Friedman, grandmother of Knesset member Rachel Azaria of the Kulanu party), the flight was an epic mix of celebration, unease and hope for the future.

A Nefesh B’Nefesh flight is always bookended by two ceremonies — a measured one at John F. Kennedy Airport in New York and a raucous celebratory one at Ben Gurion Airport, near Tel Aviv. On Tuesday morning, the olim, the Hebrew word for new immigrants, were greeted by hundreds of cheering supporters and some Israeli lawmakers, including Azaria and Oren Hazan of the Likud party.

Clark, who played three years in America’s National Lacrosse League and has lived in Australia, Canada and the Czech Republic, says he feels indebted to Israel for giving him the chance to continue to play the sport he loves. In his mid-20s, Clark says he is getting “old” in lacrosse years, due in no small part to his multiple shoulder injuries and broken bones. (He also notes that all of his front teeth are fake.)

He still owns a lacrosse and hockey goods store in Grand Junction, and says once he’s done playing professionally, he hopes to open a lacrosse goods shop in Israel, too. 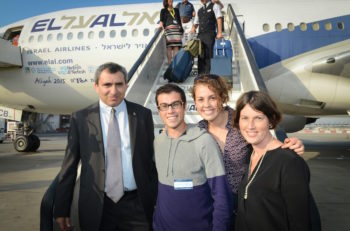 Yaniv and Hilla Singerman are flanked by Israel’s minister of aliyah and immigration absorption, Zeev Elkin, left, and their sister, Rachel Gur, an adviser to Elkin, at Ben Gurion Airport near Tel Aviv, July 14, 2015. (Courtesy of Shahar Azran/Nefesh B’Nefesh)

For Tracy Beavers, 35, an African-American Jew from Columbus, Ohio, who is moving with her family, it was an extended visit in 2012 that convinced her and her husband to realize their dream of buying a piece of land in Israel’s north.

For Hilla Singerman, 19, from what she calls the “little shtetl” of Pikesville, Maryland, near Baltimore, it was a recent gap year after high school that convinced her that she belonged in Israel (even the “creepy cats” that she says lurk in the dumpsters there did not bother her). Both Hilla and her brother, Yaniv, 21, who is also making aliyah, will serve in the Israeli army.

“All of my friends picked their colleges for the school color, and I just decided that army green was my thing,” she joked.

There were 32 families and 95 children on Monday’s flight, but of the 53 single adult olim, 12 of them will serve in the Israel Defense Forces shortly after they arrive. A former Marine, Elliot Joseph, who did not want to give his last name because of past positions in the military, is 29 and has passed the age of mandatory IDF service but wants to join nonetheless.

After being injured in Afghanistan in his fourth tour of duty, Elliot Joseph took a trip to Israel and remembers feeling connected to the country on his first day. 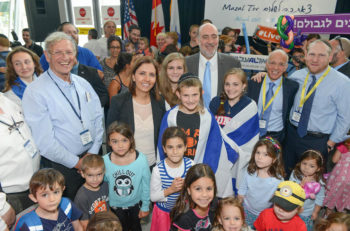 “I remember watching a Holocaust survivor sitting in a restaurant in downtown Tel Aviv. He was speaking in German or Yiddish, and he was completely happy, satisfied with his life where it was at,” Elliott Joseph said. “I remember seeing that and thinking that after all the horrible things that I saw overseas, I knew that I, too, could be happy like that. It really gave me some hope.”

Nefesh B’Nefesh co-founder Tony Gelbart said that immigration to Israel from North America is usually driven by wanting to be in Israel, as opposed to emigration from Europe, for which rising anti-Semitism is often the main impetus.