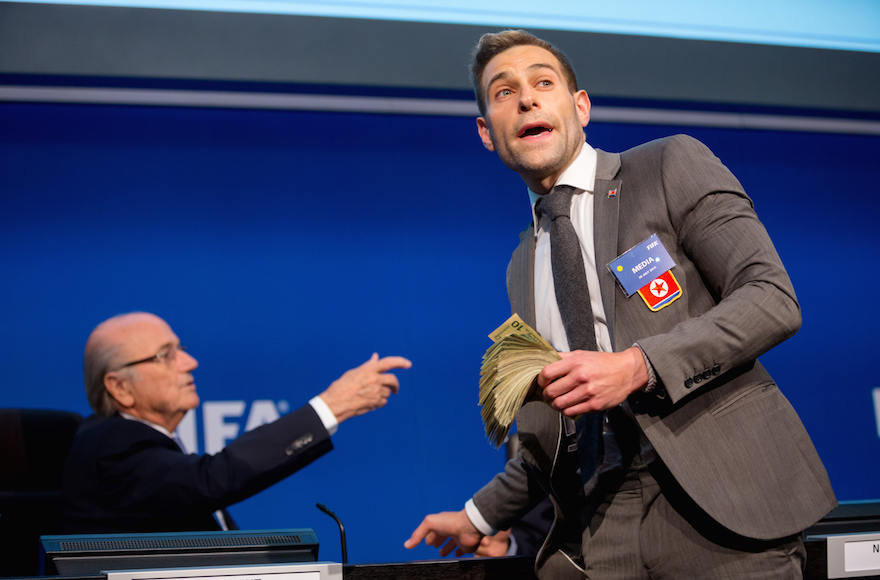 (JTA) — As one of the sports world’s most controversial figures, outgoing FIFA soccer president Sepp Blatter has seen his fair share of hecklers.

Yet he had never been showered with money by his adversaries — at least not publicly — until Monday, when a young British Jewish comedian disrupted a press conference he was giving in Zurich, Switzerland.

Before unleashing a handful of fake U.S. dollar bills toward Blatter, Simon Brodkin — whose stage name is Lee Nelson — made the case for tapping North Korea to host FIFA’s 2026 World Cup tournament.

The comedian initially tried to hand Blatter a wad of bills, but the FIFA boss ordered him removed by security. As Brodkin was being escorted away, he said, “Here you go, Sepp,” and threw the bills in Blatter’s direction. Photojournalists snapped shots of Blatter, visibly furious, in a cloud of green.

Brodkin’s prank was a sophisticated parody — and protest — of FIFA’s choice, under Blatter, of Qatar as the host of the 2022 World Cup. A whopping 1,800 foreign workers have reportedly died building stadiums for the tournament in the oil-rich emirate, which has a dismal human rights record.

That figure exceeds by far the number of lives lost at the hastily-constructed facilities for the 2014 Sochi Winter Olympics in Russia.

In May, another heckler was forcibly removed from the FIFA congress for waving a Palestinian flag in support of a failed bid to have Israel expelled from world soccer’s governing body.

Many others have heckled Blatter in connection with an FBI investigation into the actions of at least nine senior FIFA executives accused of taking bribes.

Just before the prank, FIFA announced it would hold a special congress to elect Blatter’s successor on Feb. 26, meaning he is set to remain in power for another seven months.

While the money prank was Brodkin’s first on Blatter, he has a record of soccer-related shenanigans, which suggest a high level of interest in the game.

Last year, Brodkin tried to join the England national squad as they boarded the plane for the 2015 World Cup in Brazil.

He also attempted to warm up with Manchester City players before a Premier League match against Everton in 2013.

FIFA officials filed a police complaint against Brodkin for assault, but he was let go. Shortly after the prank, he posted a message from the Twitter account of another alter ago — Jason Bent — saying: “Excited to be at Fifa meeting Sepp Blatter to secure the #NorthKorea2026 World Cup.”

Excited to be at FIFA meeting Sepp Blatter to secure the #NorthKorea2026 World Cup. pic.twitter.com/7UV6spP8wc

Despite the two men’s differences, Brodkin may well agree with what Blatter said as he waited for the money to be removed:

“We have to clean here first,” and only then “we can speak about football.”