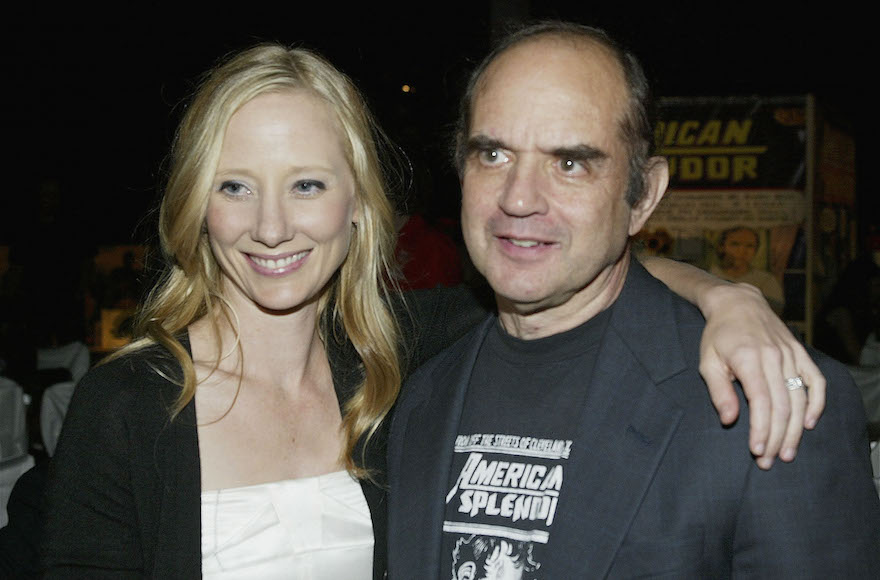 Actress Anne Heche and Harvey Pekar at an afterparty for the L.A. premiere of "American Splendor" in 2003. (Frederick M. Brown/Getty)
Advertisement

(JTA) — In the 1960s, the corner of Coventry Road and Euclid Heights Boulevard in Cleveland Heights, an eastern suburb of Cleveland, was a central meeting place for counterculture types and rebellious youth. It was the go-to spot for street musicians, storytellers and chess players.

It was on this corner that writer Harvey Pekar — who’s been dubbed  Cleveland’s unofficial poet laureate  — would sit on a city bench to write and dream, working on ideas that were later turned into his “American Splendor” series of autobiographical graphic novels. Pekar — who, in telling stories about everyday life, turned the definition of what makes a good graphic novel on its head — was a fixture on the corner from the late ’60s until his death in 2010.

Like most relics of the hippie era, Coventry’s underground scene eventually gave way to a more yuppie presence. Today, Clevelanders from across the city and suburbs frequent the area to visit its eclectic stores and restaurants. Some quirky, iconic shops still remain: Record Revolution, a spot for albums and “smoking accessories” known to be a haunt for rock stars; the Grog Shop, a bar and music club; Mac’s Backs bookstore and vegetarian-friendly Tommy’s restaurant, which first opened as a soda fountain in 1972.

On Saturday, July 25, the redeveloped corner will be dedicated as Harvey Pekar Park. “[It’s] the corner where (young) Harvey used to try out material on the crowd, as a sort of stand-up comedian,” his widow and sometime collaborator, Joyce Brabner, wrote in a recent Facebook post. “The spot had been a haven for nonconformist and creative youth until overblown anxiety about flash mobs and kids hanging around without money to support local business led to curfews and what many felt was repressive ‘rezoning’ and redesign.”

Attempts to interview Brabner, who avoids the media spotlight, were unsuccessful. She has also shunned such dedications in Pekar‘s honor until now.

Steve Presser, owner of the Coventry icon Big Fun Toy Store, told JTA that the corner where Pekar held court “has been sacred ground for some time.”

He said the Coventry merchants saw Pekar a lot. He frequented the book and music stores, amassing in his small apartment thousands of records and books until the floor “started to buckle,” according to Presser, who lived in the building next door. He called Pekar a “Renaissance man” whose knowledge of music, especially jazz, was “huge” and who was very well-read.

“The best way to describe Harvey is that Harvey was Harvey,” said Presser, who will speak about the author during the official dedication. Some have called Pekar a curmudgeon and others have described him as gruff, but Presser says he was a “nice guy” who “walked to a different beat.”

Presser knows many of the locals who have appeared in Pekar‘s graphic novels. “Every character was dead-on,” he said in admiration.

The novels later were turned into a well-received movie called “American Splendor,” which will be screened at the park’s dedication. The event will also include a jazz concert and presentations by local graphic novelists.

“He put us in his stories, and we wanted to create some place where he could be part of our story,” said Angela Hetrick, executive director of the Coventry Village Special Improvement District, which initiated the idea of the park.

The corner’s redesign includes a small amphitheater for future “Harveys,” as well as small-scale performances. Six permanent, double-sided banners will hang from lampposts on the corner and will tell what Brabner calls “a special ‘American Splendor’ story,” about Pekar and the history of Cleveland Heights, illustrated by Joseph Remnant, who illustrated  “Harvey Pekar‘s Cleveland,” one of his last graphic novels. A plaque honoring Pekar also will be installed.

The many Jewish merchants on Coventry were just starting to move to Cleveland’s eastern suburbs when Pekar started hanging out there in the mid-’60s. Pekar‘s first language was Yiddish, and he was known to pepper his conversations with Yiddish phrases as an adult.

His parents, immigrants from Russia, were both ardent Zionists; his father was an observant Jew and his mother a Marxist. Pekar, however, was critical of the State of Israel. His complicated relationship with the Jewish state (along with a history of Israel) was addressed in the posthumously published graphic novel, “Not the Israel My Parents Promised Me.”

Pekar worked until 2003 as a file clerk at the Louis Stokes Cleveland VA Medical Center and was respected by his colleagues as the man who could find any file. He is buried in Cleveland’s Lake View cemetery, next to the grave marker of Eliot Ness.