Jewish groups stake out positions on Iran deal, but whom do they represent? 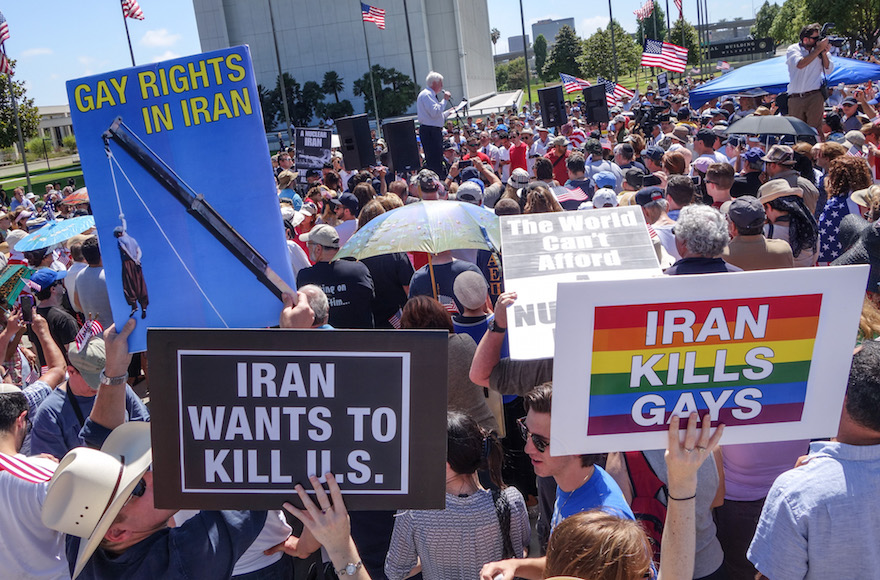 Hundreds turned out for a protest in Los Angeles against the Iran nuclear deal, July 26, 2015. (Peter Duke)
Advertisement

NEW YORK (JTA) – When the Jewish Federation of Greater Los Angeles came out with a strongly worded statement last week opposing the Iran nuclear deal, it became one of a handful of federations across the country to stake out a clear position on the agreement.

“This Iran deal threatens the mission of our Federation as we exist to assure the continuity of the Jewish people, support a secure State of Israel, care for Jews in need here and abroad and mobilize on issues of concern,” the federation said in its July 21 statement.

The accord, reached July 14 in Vienna, places limits on Iran’s nuclear program in exchange for sanctions relief.

Unlike in some other communities where federation leaders came out against the deal (none has come out in support), there was strong, public pushback in Los Angeles. In a column titled “Federation: Take it back,” Rob Eshman, the editor-in-chief and publisher of the L.A. Jewish Journal, called the federation’s action a mistake.

“The Los Angeles Federation made a wholly unnecessary but completely reparable mistake by urging its members to defeat the Iran deal,” Eshman wrote in his piece published Sunday. “In doing so, it misrepresented the people it purports to represent, alienated a good chunk of them, and clouded, rather than clarified, the Iran deal debate.”

Federation CEO Jay Sanderson has since canceled his planned vacation to talk to community members upset about the federation decision.

“We are not a voice of the entire Jewish community. We just aren’t. Nobody is. And we don’t make political statements. But this is an extraordinary moment,” Sanderson told JTA. “Sometimes when you take positions, you do so recognizing that one of the results will be a louder, more interesting communal conversation. At the very least the community is thinking and talking about this in a way it hadn’t a week ago.”

The kerfuffle in Los Angeles highlights the apparent gap on the Iran deal between American Jews as a whole and American Jewish organizations.

READ: The Iran deal and the hubris of certainty

The survey was conducted by Steven M. Cohen, a research professor at the Hebrew Union College-Jewish Institute of Religion, and carried out by SSRS Omnibus, which culled Jewish respondents from the lists it has assembled from nationwide weekly telephone surveys on a variety of issues. The margin of error was 6 percent.

By contrast, all seven Jewish federations that came out with position statements on the deal — Boston, Miami, Detroit, Dallas, Florida’s South Palm Beach, Phoenix and Los Angeles — oppose it. The federation umbrella group, the Jewish Federations of North America, has not taken a formal position.

It’s not uncommon for federations to take policy positions, but the issues usually are matters of broad consensus within their communities, such as bills that would affect the social safety net or increased U.S. assistance for Israel.

The Conference of Presidents of Major American Jewish Organizations, an umbrella group for 51 national Jewish organizations that is meant to be the Jewish community’s voice on foreign policy, also has not taken a position on the Iran deal. Nevertheless, the organization’s executive vice chairman, Malcolm Hoenlein, made his position on the deal clear in an interview.

“We believe it is a dangerous deal and the implications are extremely serious,” Hoenlein told JTA. “This is not some minor piece of legislation. This really goes to the core of concerns that we have been involved with for 20 years regarding Iran’s nuclear program. The more people study the deal, the more questions people have and the more concerns are raised.”

Hoenlein said that while an “overwhelming” majority of organizations in the Presidents Conference oppose the deal, the umbrella group, which is meant to operate on the basis of consensus decision-making, isn’t yet ready to take a formal position.

“We will take a position,” he said, “but we will come to it in a way that keeps the community unified.”

In Boston, the local Jewish federation, Combined Jewish Philanthropies, was the first to publicly oppose the Iran deal after it was announced. The decision followed a unanimous vote in a conference call with board members, the federation’s president, Barry Shrage, told JTA.

“We took this to our full board, and it’s got Democrats, Republicans, liberals and conservatives. It was unanimous in opposition to the deal,” Shrage said of the 24 of 40 board members who participated in the call. “Of course, there are lots of different opinions about what we did. We don’t think we’re speaking for the whole Jewish community. We expressed the opinion of our board.”

So far, the only Jewish organizations to express public support for the deal have been those identified with the political left-wing, such as J Street and Americans for Peace Now. Meanwhile, right-wing organizations like the Zionist Organization of America and Orthodox groups such as the Orthodox Union have come out against the agreement as has the American Israel Public Affairs Committee (AIPAC).

The Jewish Journal isn’t the only poll of U.S. Jewish sentiment on the deal, but it’s the only scientific one to be carried out by a nonpartisan group. The Israel Project released its own survey on Tuesday conducted online by a Republican pollster showing slightly more Jews opposing the deal, 47 percent, than supporting it, 44 percent. Also Tuesday, J Street released a poll showing U.S. Jewish support for the deal at 60 percent, compared to 40 percent opposed.

Meanwhile, national surveys of Americans also show some divergence. In a telephone survey of 1,017 Americans sponsored by CNN and carried out July 22-25 by ORC International, 52 percent of respondents said that Congress should reject the deal, compared to 44 percent who said it should be approved. By contrast, a Washington Post telephone survey conducted a few days earlier, July 16-19, found 56 percent support for the deal and 37 percent opposed. It’s not clear whether the different findings are the result of methodological differences or whether Americans are growing increasingly opposed to the deal the more they learn about it.

In Israel, a poll conducted by Israel’s Channel 10 shortly after the agreement’s announcement found 69 percent of Israeli respondents opposed to the deal and 10 percent in favor.

“We live in an elitist bubble of Jewish insiders, and we forget that the rest of the Jewish world doesn’t think like us,” Cohen said. “Jewish organizations are doing what they’re supposed to be doing: representing their membership. That makes sense.”

As for the wide difference between American and Israeli Jews, Cohen, who holds dual Israeli and American citizenship and divides his time between the two countries, chalked it up to the Israelis’ heightened sense of their own vulnerability.

“Israeli Jews have a strong sense of their vulnerabilities and their imminent destruction, given who their neighbors are,” he said. “American Jews’ neighbors aren’t trying to kill them; they’re marrying them.”