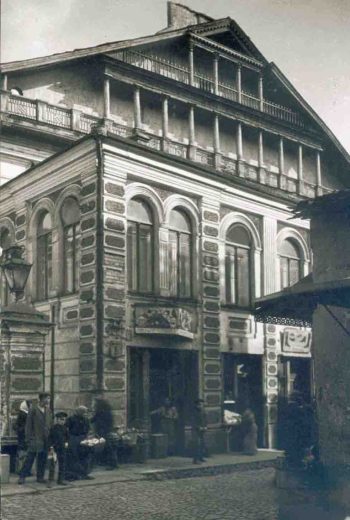 The Great Synagogue of Vilna in 1934 (Wikimedia Commons)

(JTA) — A radar survey has found that significant pieces of Lithuania’s largest synagogue complex, which was damaged by the Nazis and destroyed by the Soviets, still remain but are buried underground.

The ground-penetrating radar survey conducted in June in Vilnius (previously called Vilna) by a joint team of academics from Israel and the United States will help guide an archaeological excavation of the Great Synagogue and Shulhof of Vilna scheduled for 2016, the Israel Antiquities Authority said in a news release.

Remains discovered under the site, where a school now stands, include sections of the Great Synagogue and possible remnants of its mikvahs. Built in the 17th century in the Renaissance-Baroque style, the synagogue was “the oldest and most significant monument of Lithuanian Jewry,” according to the news release.

Over the years, several other Jewish facilities sprung up around the synagogue, including 12 synagogues, kosher meat stalls, a Judaica library and several mikvahs.

Vilna was a major center of Jewish learning and scholarship until the Holocaust.

The Israel Antiquities Authority is proposing that the 2016 excavation be conducted by a “mixed team of archaeologists and student volunteers from Lithuania, Israel and the worldwide Jewish community with the aim of ensuring that Jewish built cultural heritage is seen as an important and inseparable part of Lithuanian heritage …”