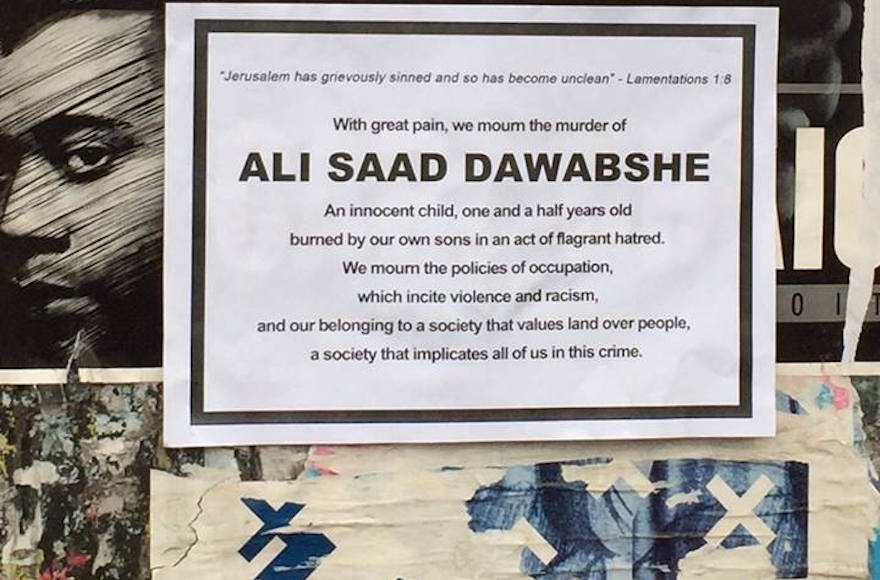 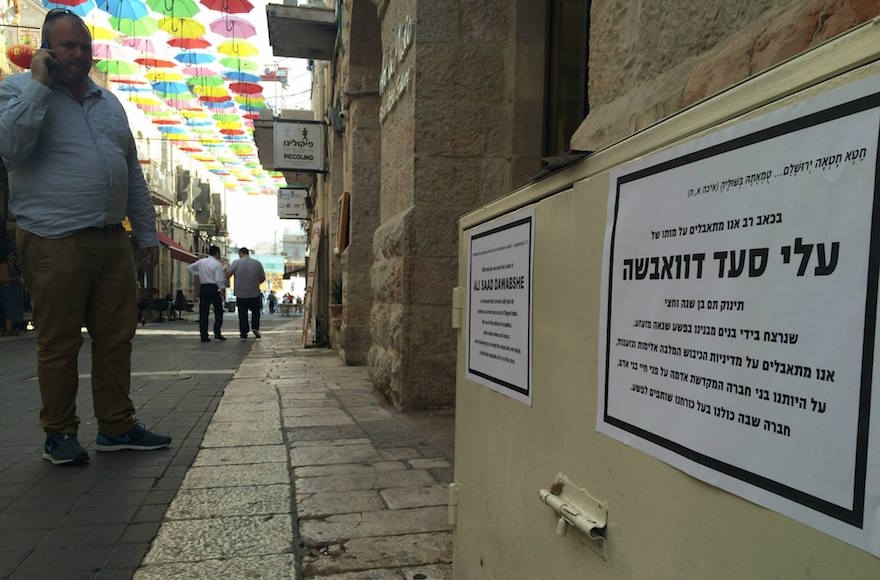 In Israel, when a community member dies, it is common to see posters plastered on buildings throughout the neighborhood commemorating the deceased. These so-called mourning notices, similar to obituaries in American newspapers, serve to alert the community of the death and the location of the shiva.

In the wake of the recent deaths of Ali Dawabshe, the 18-month-old Palestinian victim of an arson attack in the West Bank, and Shira Banki, a 16-year-old girl stabbed at the Jersusalem Pride Parade, two unorthodox mourning notices have begun to circulate around Tel Aviv and Jerusalem.

The posters, which appear in Hebrew and English, go beyond the standard mourning notice detail and include an additional strong political message.

“We mourn our belonging to a society that values some lives over others, a society that implicates all of us in this crime,” reads the one that commemorates Banki.

The poster creators Ilana Sichel, a writer and the editor of The Jewniverse, and artist Romy Achituv are hopeful that a direct visual reminder of the deaths will spur Israelis to engage with the political issues they see are behind the murders.

“We see these deaths as political deaths,” Sichel said. “They’re symptomatic of a really frightening kind of intolerance and Jewish extremism that has taken root here.” 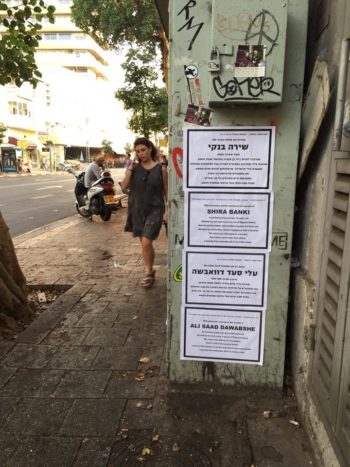 Sichel first got the idea on a visit to Yad Vashem, where she saw a mourning notice in an exhibit about the tragedy of the Struma ship, which sunk in 1942 while carrying nearly 800 Jewish refugees on their way from Axis-allied Romania to what was then the British Mandate of Palestine. However, Sichel said the poster caught her eye because it was a “moving intersection of grief and protest” that pointed to the “politics of grief.”

Sichel began putting the posters up in Jerusalem on Sunday and uploaded photos of them online, where they’ve picked up traction on Facebook. However, the reaction hasn’t been uniformly positive – she says many of the posters commemorating Dawabshe have been torn down in places in Jerusalem and Tel Aviv.

When asked in a Facebook post why they did not make a version of the poster in Arabic, Sichel said that many Israelis might have ignored the text right away if it was in Arabic.

“Our sympathy to the Palestinian community is deep,” Sichel told JTA. “But this poster campaign is not proving our allegiance with them. This is really a conversation for Jews and between Jews.”