For French Jews, resort town of Deauville doubles as a safe haven 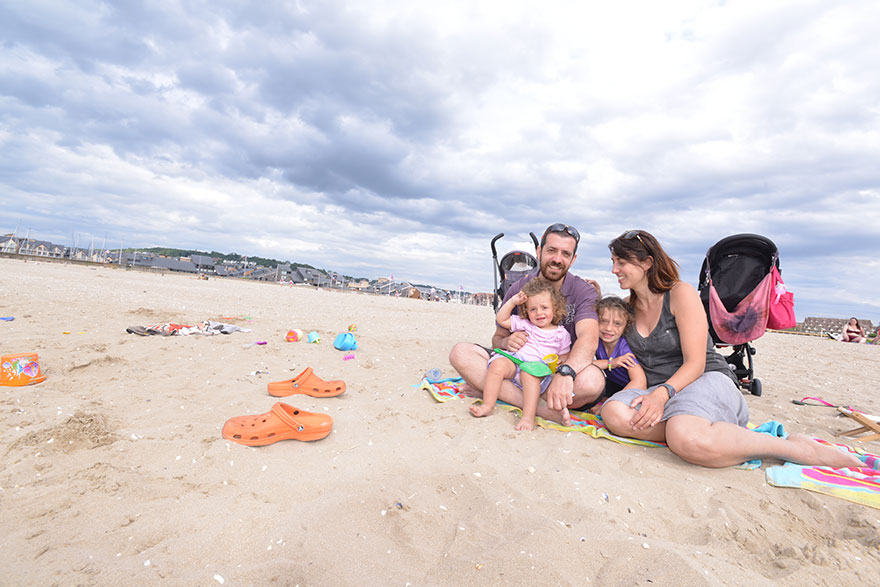 Colonial and French Normandy-style homes are clustered around the southern edges of its main street, which features small, cobblestone piazzas. There are more affordable apartment houses to the north, near the main marina, where the numerous yachts double as houseboats.

With anti-Semitism on the rise in Paris, Deauville in recent years has also become a haven for French Jews — a place where they can tend to their Shabbat and holiday routines without worrying, as they do back in Paris, about being attacked for displaying their identity.

“I feel a sense of relief here,” said Fabienne Bismuth, a Parisian Jew who was born in Tunisia and owns two summer homes in Deauville. “I can walk around like I used to when I was young, without fear.” 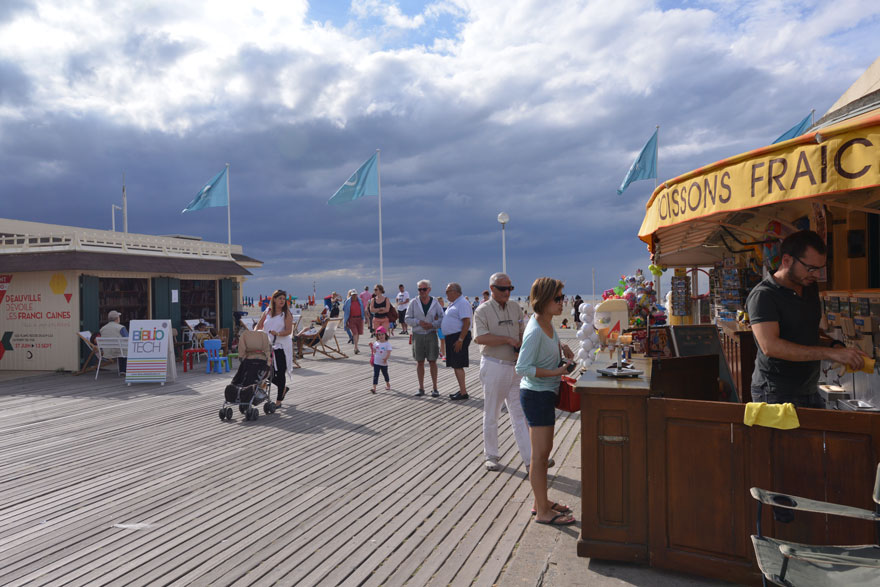 The entrance to the main boardwalk at Deauville beach on July 24, 2015. (Cnaan Liphshiz)

Deauville provided respite, too, for Shimon and Nadia Wilhelm. When they heard that Islamist terrorists had killed 12 people at the offices of the French satirical newspaper Charlie Hebdo on Jan. 7, the Wilhelms — fearing Jews could be targeted next — prepared to leave their Paris-area home for Deauville, where they own an apartment. So two days later, when an accomplice of the Charlie Hebdo killers murdered four Jews at a kosher supermarket and holed up there with another 20 hostages, the family was ready to go at a moment’s notice.

“We heard the initial reports from the supermarket, turned off the television, took the kids down to the car, put the bags in the trunk and drove away,” said Nadia Wilhelm, an Orthodox Jew and mother of three. “We left just as police were closing off our neighborhood and arrived three hours later to a world of calm in Deauville. It was surreal.”

Last year, French Jewry’s watchdog on anti-Semitism recorded 851 incidents — its second-highest annual tally since it started collecting such data in the 1980s. (The highest was 2004, when the second Palestinian intifada inspired attacks on French Jews, predominantly by Muslims and Arabs.) Of the 508 anti-Semitic incidents recorded from January to May of this year, 23 percent involved physical violence. Most occurred in Paris, home to some 70 percent of France’s Jewish community of 500,000, the largest in Europe.

The rising tide of anti-Semitism is seen as an important catalyst in the growth of immigration by Jews to Israel, or aliyah, from France, which last year totaled a record 6,668 — making France the largest provider of Jewish immigrants to Israel for the first time in a given year. In the previous decade, aliyah from France crossed the 3,000 mark only once, in 2013. 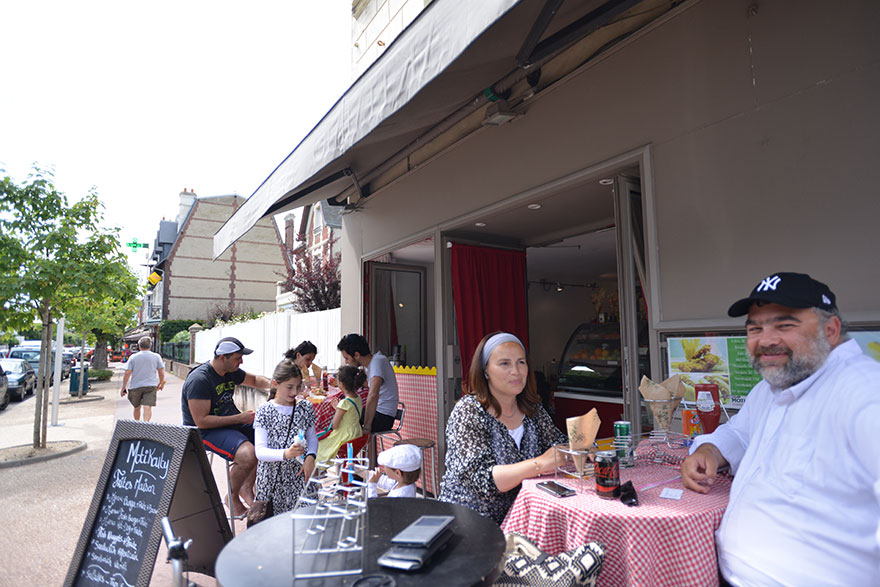 Nadia and Shimon Wilhelm and their children at a kosher restaurant in Deauville on July 24, 2015. (Cnaan Liphshiz)

The departures are starting to be felt in Deauville, too, according to Gerard Bouhnik, a Parisian Jewish businessman of Tunisian descent who opened up at least 10 shops — from beachwear to ice cream parlors — since he started investing here in the 1980s.

Deauville’s small real-estate market was down 10 percent last year compared to the previous year, with projections for 2015 being even bleaker, according to Pascal Le Bellego, director of the Century 21 Tirard & Gardie real-estate agency. While Jewish emigration may have had a compounding effect, the crash is likely connected to a stagnant economy and hike in taxation, which is prompting owners across the nation to part with luxuries like vacation homes. (Even so, Deauville is not cheap: A two-bedroom home in the city center costs about $400,000, with seven-room beachfront villas going for five times that amount.)

“There was a time that this place was booming, and those times are over,” said Bouhnik as he sat down for an early Friday lunch with his daughter, Emma, at Motikouty — a newly opened kosher cafe where the specialty dish is salted fries served in a paper cone topped by sauce, as is customary in northern France and Europe’s lowlands. (The fries are often consumed by locals with mayonnaise and bits of raw onion, though Parisians tend to opt for ketchup.) 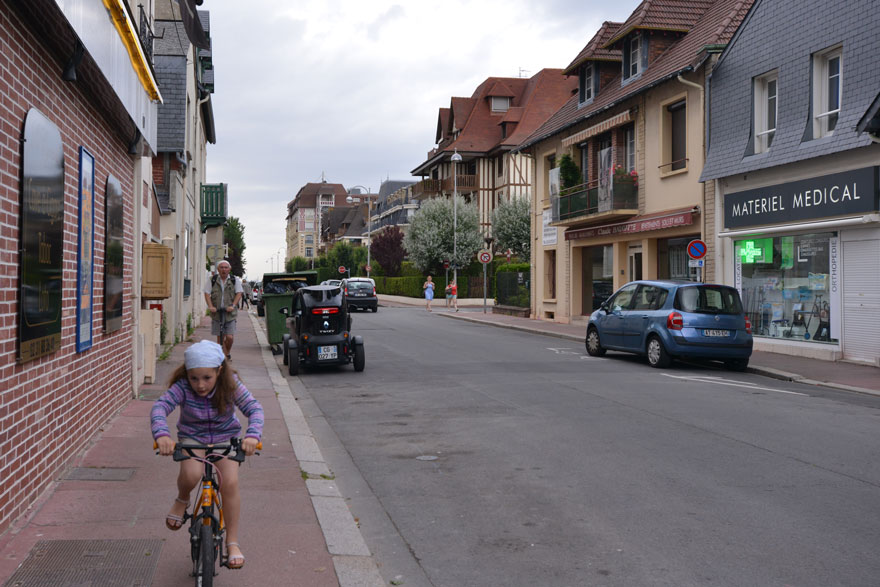 A tourist from Russia and his grandaughter in Deauville on July 24, 2015. (Cnaan Liphshiz)

But Shmuel Levin, the Chabad-Lubavitch emissary to Deauville, said he sees no substantial change in the number of Jews who frequent the town.

“Jewish life in Deauville reaches a pinnacle at Shavuot,” he said in reference to the Jewish holiday that often falls in June and commemorates the giving of the Torah on Mount Sinai. “Nobody’s sure why, but it’s the most important religious holiday of the year around here, and it’s crowded as ever.”

On Shavuot, thousands of French Jews walk around Deauville, popping in and out of the three established synagogues as well as another 20-some smaller synagogues, or shtieblachs, that residents set up in their homes for the holiday. The celebrations stretch into the wee hours of the morning.

“Shavuot is the Yom Kippur of Deauville,” said Gad Chetboun, a business coach from Paris and the father of two young daughters. “We actually try to avoid it because the Jewish influx means this place gets super crowded.”

Chetboun and his wife, Deborah, like other working parents, spend about two or three weeks a year in Deauville. But some older vacationers may spend months at a time.

Among Jewish pensioners, Levin said, Deauville is a meeting point for Sephardim — the French communal majority of 60 percent, according to the European Jewish Congress — and the Ashkenazi Jews who were the majority before the Holocaust and the arrival of some 300,000 North African Sephardic Jews from the 1950s on.

“On sunny days, you can see the old Ashkenazi Jews chatting in Yiddish, then switching to French to crack jokes with the old Jewish Tunisians, who reply in their Arabic-spiced dialect,” Levine said.

Like his Chabad movement, which first came to Deauville in the 1990s, “the municipality, too, [has] realized the Jewish potential of this place,” Levin said. In 2013, the city opened the Grand Synagogue of Deauville with local government funding.

Anti-Semitic violence is rare here and police officers in this well-to-do town discourage criminal elements with their bicycle patrols that scour the promenades.

But Bismuth said she was once insulted on the street in Deauville by a passer-by who mocked her driving by asking whether she learned it in Jerusalem. Bismuth, who plans to move to Israel next year, said she still gets angry when she thinks about that incident.

“As you can see, everything is beautiful and wonderful here,” she said with more than a hint of sarcasm. “I wonder if the French are asking themselves why it is then that so many Jews are leaving.”