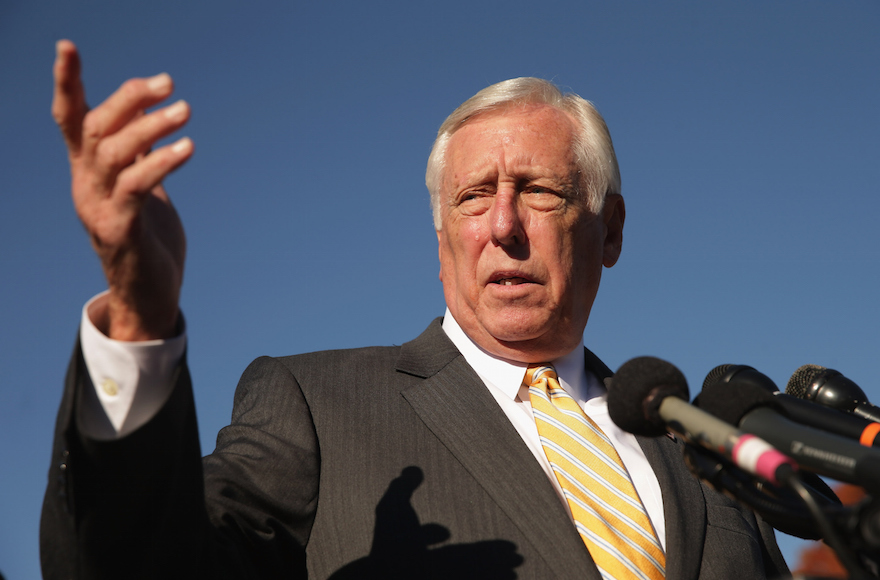 Steny Hoyer has not yet decided how to cast his Iran vote, but he’s telling Israelis that whatever happens, the Israeli-American relationship will thrive.

Rep. Hoyer, D-Md., the minority whip in the U.S. House of Representatives, called JTA from Israel, where he is visiting for the 14th time.

“I have not and I don’t intend to until early September,” Hoyer said when asked if he has made up his mind about the nuclear deal between world powers and Iran. Rep. Nancy Pelosi, D-Calif., the minority leader, backs the deal.

The group left Tuesday and so far has met with Israeli President Reuven Rivlin and with Palestinian Authority Finance Minister Shukri Bishara. They are in Israel until Aug. 10 and have a meeting lined up with Prime Minister Benjamin Netanyahu toward the end of the tour.

With Republicans mostly lined up against the deal, the battleground to defeat the agreement in Congress is among Democrats. Netanyahu will likely make as forceful a case against the deal as President Barack Obama, who has conducted his own meetings with the Democratic caucus, has made in favor of it.

Hoyer did not sugarcoat the differences.

“The leaders of our two nations, Netanyahu and President Obama, have a very strong disagreement publicly aired on both sides,” he said.

He suggested the bitterness over Netanyahu’s speech against the Iran deal to Congress in March had yet to dissipate.

“No doubt that Prime Minister Netanyahu’s speech to Congress, and the circumstances surrounding it, where Speaker [John] Boehner did not discuss it with the president or Leader Pelosi or Leader [Harry] Reid put things in a pretty contentious way,” he said.

Rep. Boehner, R-Ohio, organized the speech with Netanyahu and the Israeli ambassador, Ron Dermer, and asked them to keep it secret until he announced the invitation six weeks in advance. Boehner did not consult with Obama, nor with Pelosi or Sen. Harry Reid, D-Nev., the minority leader in the Senate.

Hoyer said he’s encountered anxieties among the Israelis about the tensions.

His message to them: “The relationship between Israel and the United States, which is a seven-decade close relationship, is not going to be undermined by the fact that two of our leaders have strong feelings about each other’s positions,” he said.

Hoyer confirmed that Israeli officials are not ready to discuss additional U.S. assistance until they are certain that Congress will not be able to kill the deal.

“My sense is that Israel’s leadership is not prepared to talk about alternatives other than seeing the agreement not agreed to and a better one being formulated,” Hoyer said.

“There may well be discussions after the fact, tactically, rather than discussing [U.S. assistance] now, which would imply having approved the agreement.”