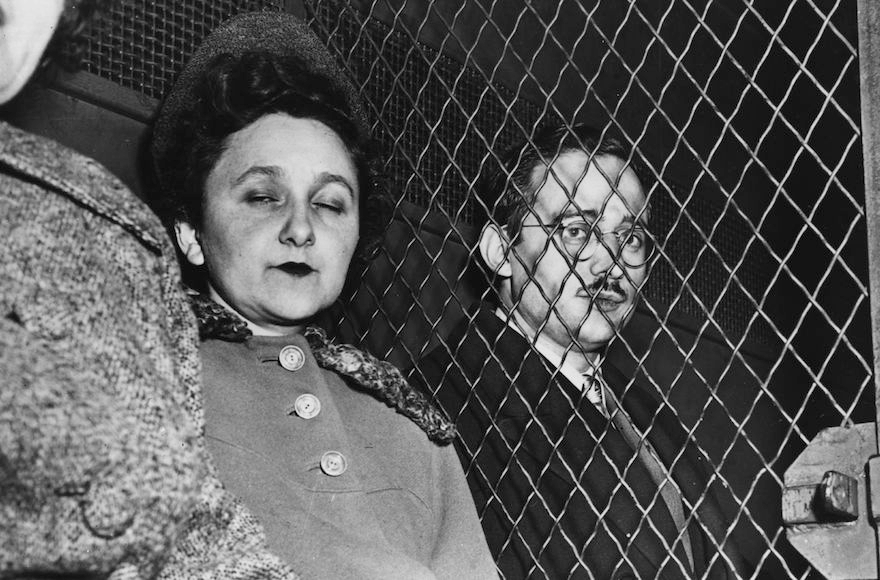 Julius and Ethel Rosenberg en route to the Federal House of Detention, after they had been found guilty of nuclear espionage. (Keystone/Getty Images)
Advertisement

Honor thy father and mother, says the Torah. In the case of the sons of convicted spies Julius and Ethel Rosenberg, that means requesting a presidential pardon.

Brothers Michael and Robert Meeropol penned an op-ed in the New York Times Monday asking President Barack Obama to acknowledge that their mother, Ethel Rosenberg, was wrongly convicted and executed for conspiracy to commit espionage in 1953.

Ethel Rosenberg and her husband, Julius Rosenberg, were at the center of one of the most controversial spy cases of the 20th century and were victims, many say, of the zealous overreach of Senator Joseph McCarthy’s anti-communist crusade.

While the brothers did not dispute their father’s culpability in their op-ed (“Scholars mostly agree,” they wrote, “that Julius was a spy”), they made a case that their mother, though likely aware of Julius’ activities, was not an active conspirator.

The Rosenbergs were arrested in the summer of 1950 on charges of passing along atomic-bomb secrets to the Soviet Union. The case against Ethel Rosenberg was weak from the start: Historians believe she was largely a prosecutorial pawn used to put pressure on her husband. Damning testimony during the 1951 trial, however, came from David Greenglass, her brother.

Greenglass was an army machinist and committed communist, who claimed his sister had been present at meetings in which he shared nuclear intelligence with Julius Rosenberg and that she typed up the notes.

Later in life, when tracked down by a journalist, he admitted to lying on the witness stand to protect his wife, Ruth Greenglass, whom many suspect was actually the typist. David Greenglass, who served 10 years in prison for his role in the conspiracy, died last October at age 92.

In their Times op-ed, the Meeropol brothers cited the release of Greenglass’ grand jury testimony last month, six decades after it was given, in which he did not mention his sister’s involvement.

They also pointed to KGB records of communication with the Rosenbergs and noted that while Julius had a code name, “Liberal,” Ethel did not. They argued this means she was not considered a spy by the Russians and are now asking the U.S. government to reach the same conclusion.

“Our mother was not a spy,” they wrote in the Times. “The government held her life hostage to coerce our father to talk, and when that failed, it extracted false statements to secure her wrongful execution.”

The Rosenbergs’ sons were 10 and 6 years old respectively when orphaned. They were later adopted by Abel and Anne Meeropol and have made it a lifelong mission to shed light on their parents’ case.

Michael Meeropol, now a professor of economics, edited “The Rosenberg Letters,” a compilation of the prison correspondence between his parents. Robert Meeropol founded the Rosenberg Fund for Children, which supports children of “targeted activists” and wrote “An Execution in the Family,” a memoir of his experience. They co-authored “We Are Your Sons,” about their turbulent childhood and political awakening, all of which has led to yesterday’s formal appeal.

“It is never too late to correct an egregious injustice,” they wrote. “We call on the government to formally exonerate Ethel Rosenberg.”