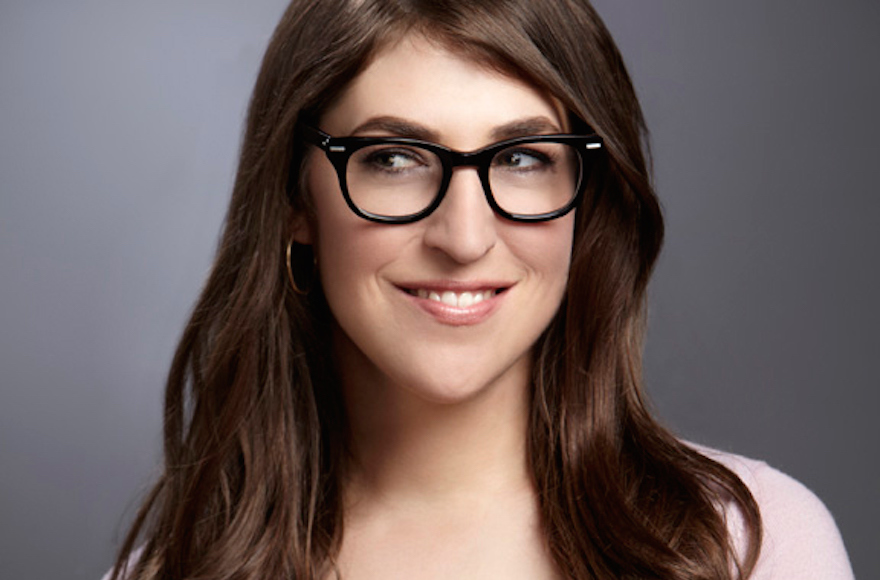 Don’t expect to find style advice or beauty trends. Do expect musings on grief, the confusion of the Iran deal and neuroendocrinology in an approachable, thoughtful voice.

Though technically a celebrity blog because, well, it’s a blog and its author is a celebrity, GrokNation is interested not in hawking products but rather in sharing ideas.

“It’s for people who collect thoughts,” said Mayim Bialik, the actress-neuroscientist behind the website, which launched earlier this week. A regular contributor to the JTA-affiliated Kveller parenting blog, Bialik spoke with JTA about building her own platform, discussing faith universally and “being a nerd in the non-nerdy world of Hollywood.”

The founding question behind GrokNation is: “What if you could use your celebrity platform to inspire and educate and raise money?” Bialik said. Or in other words: “I said, ‘I want to do Goop for down-to-earth nerdy people,’” a reference to Gwyneth Paltrow’s lifestyle site, the epitome of curated high-end perfection.

Nerds, of course, come from all ages, professions, geographic regions and faith traditions. Grokites, as Bialik referred to her community of readers in a welcome letter, may be fans of “The Big Bang Theory,” the popular sitcom on which Bialik appears (and for which she recently earned her fourth consecutive Emmy nomination); parents who have followed her for the past five years on Kveller; fellow scientists, fellow Jews or none of the above.

“It’s not for anyone in particular,” Bialik said. “If everyone has an interest in understanding the world deeply, that’s what they have in common. That’s a good place to start from.”

And that is, after all, where the name comes from. “Grok” is a 1960s sci-fi term, from the book “Stranger in a Strange Land,” which means to fully and deeply grasp something.

The site is divided into six categories: GrokNews, GrokHollywood, GrokParenting, GrokWomen, GrokCulture and GrokFaith. In each, Bialik has already offered insights, raised questions and admitted publically to things she’s struggling with.

That humility and openness was a mark of her writing for Kveller, which she will still contribute to monthly. But GrokNation offers something different. “I realized I can reach more people through my own platform,” she said, adding, “It’s a bit of a safer space when you’re the founder of the site. You have a little more autonomy.”

Bialik credits Kveller with honing her writer’s voice. “I learned to be a writer there,” she said, as well as how to edit her own words and “not sound too judgmental.”

“I’ve learned a lot from other writers and editors in terms of what we share about our children and how,” she said. “I’ve made an agreement with my children not to share anything they’re not comfortable with.”

So she won’t dish on the “birds and the bees” talk she had with them — except to say it was “phenomenal.” “I plan to talk a lot about what I don’t talk about and why,” she said.

But one of the most refreshing aspects of Bialik’s writing is what she is willing to address, from the gun debate to being a woman in Hollywood. In a post about “Aging in Hollywood,” Bialik bemoans the physical regimens of stars but also recognizes the realities and expectations of her profession and refuses to take a righteous stance against ever getting plastic surgery.

“It’s no secret I work in an industry where people get plastic surgery,” she said. So why not grapple with it? “I’m allowing a transparency that many people try to protect.”

That transparency extends to other areas of her identity, like Judaism. Faith plays an important role in Bialik’s worldview and daily life, and is yet another complex topic that we don’t often see celebrities address (aside from thanking God in acceptance speeches). But when discussing matters of faith, Bialik has a broader audience in mind.

“We did research and found there are a lot of non-Jewish people who like my articles on faith and religion,” she said. “And a lot of non-religious people who appreciate a scientist’s views on God and religion. We try to put a universalist spin on it.”

Sharing aspects of her life means sharing difficult experiences as well, like the recent death of her father. “I wasn’t sure how to write about my father’s death,” she said.

But readers, she said, have responded positively and appreciate the honesty, particularly from a celebrity, whom, as a category of people, we don’t generally expect honesty from.

Bialik said the small team behind GrokNation is responsible for challenging her to tackle tough topics. Esther Kustanowitz, the site’s editor, encouraged Bialik to write about her grief. And Immanuel Shalev, the site’s brand consultant, has been a big confidence booster. “He believes in me more than I believe in myself,” she said.

At the moment, GrokNation is a small operation: Bialik writes all the posts (for now) and plans to publish 3-4 small ones and 1-2 big ones each week. Kustanowitz does all the scheduling and is “a social media goddess,” said Bialik. Sara Nachlis, Bialik’s assistant, is assistant editor, while Shalev “talks me off the ledge.”

Merely days old, GrokNation is off to a good start (the launch required additional bandwidth to accommodate heavy traffic) and is paying attention to what readers respond to as it shapes its identity.

“We would like to have other writers and voices,” said Bialik of future plans, which also include video posts and a charity component, which will let readers learn about, and contribute to, various causes.

“It’s a conscious-raising venture,” she said. “We want people to feel like a community, and challenge people to do good.”